A full Cabinet meeting is to held next Monday to discuss the recommendation from the National Public Health Emergency Team to move to Level 5 Covid-19 restrictions.

It is the second time NPHET recommended the move to Level 5 and comes as the Department of Health reported a further eight Covid related deaths and 1,276 new cases of the disease.

There are currently 260 virus patients in hospital, with 30 in ICU.

The Chief Medical Officer Dr Tony Holohan briefed the three leaders of the coalition parties today, along with senior ministers, on the proposal to impose Level 5 restrictions, which NPHET says should remain in place for six weeks.

Following today's briefings, the leader of the Green Party Eamon Ryan described the situation as "complex", with "so many different variables".

"A lot of analysis has to be done," he said. He said Government shares the concerns of NPHET when looking at the numbers, and increased incidence of the virus.

However, he said that the Government has to "balance up a whole range of areas" including the impacts of the virus and other impacts on society.

RTÉ News understands that further assessments of additional measures will take place on Sunday, with a Cabinet sub-committee meeting on Monday morning ahead of the full cabinet meeting later that day.

On Twitter she said: "Jobs, livelihoods and lives in the balance. No direction, comment or reassurance from government. Not good enough."

In a statement, the Government said that the Chief Medical Officer provided an analysis of the virus in each region of the country at today's meeting.

It said "an assessment of current hospital response capacity, and an update on the test and trace system" was also provided by the head of the HSE, Paul Reid.

It said that central to the discussions was "the  overarching aim of protecting lives and livelihoods" if a decision to move to stricter measures was taken.

The Government also said that ministers were told today that "children were safer in schools, transmission rates are low, and that the continued opening of schools is very important to the development and wellbeing of children and young people".

Level 5 comes with a big impact

There are fears that Level 5 restrictions could leave up to 600,000 people once again reliant on the Pandemic Unemployment Payment for support, and that businesses would be unable to sustain further closures. 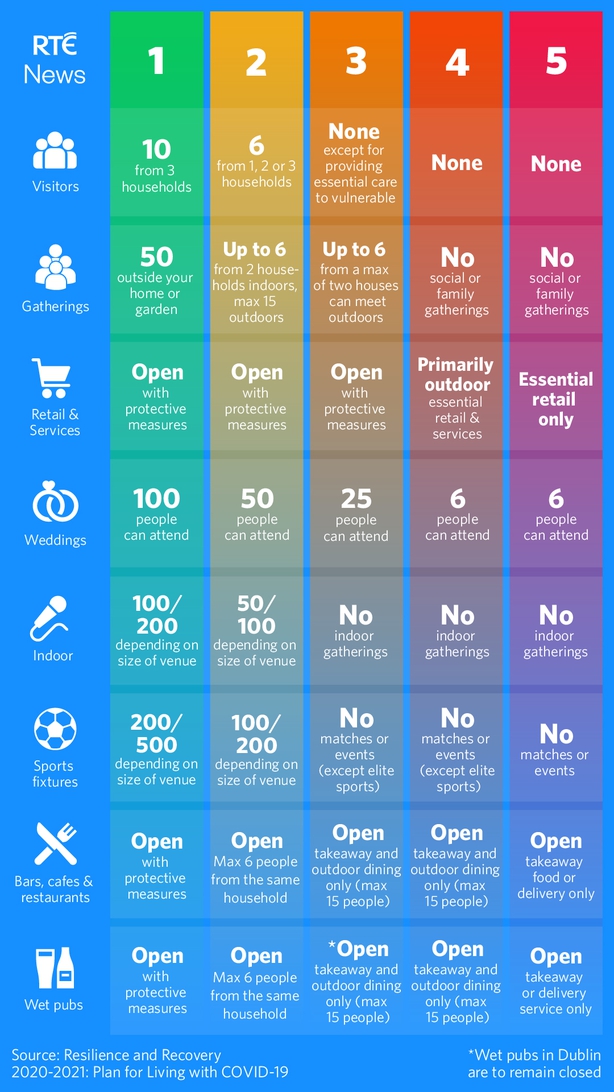 Such a move could see people being asked to stay within 5km of their home.

Bars and restaurants would go back to takeaway service, and only essential retailers would stay open.