The Department of Health has announced that a further 13 people who had been diagnosed with Covid-19 in Ireland have died, bringing the overall death toll here to 1,604.

The department has also announced an additional 76 confirmed cases of the virus.

It brings the overall number of cases in Ireland to 24,582.

Latest figures from the Health Protection Surveillance Centre, as of midnight on Thursday, show that healthcare workers account for just shy of 32% of all cases.

Read more:
Taoiseach says no change to 2m social distance advice
Harris urges public not to get ahead of themselves
Galway market forced to close early over social-distancing concerns

.@Orlaodo reports on the latest figures from the Department of Health, which show a further 13 people with Covid-19 have died | More: https://t.co/zfXsVG4Nsr pic.twitter.com/wYN2H4fNwz

The figures come as Taoiseach Leo Varadkar earlier reaffirmed that the two-metre social distancing rule "stands", and there has been "no change" to the public health advice.

Mr Varadkar made the remark this morning after it was revealed that several Cabinet ministers advocated yesterday for the adoption of World Health Organization guidance, which states that a one-metre distance is considered to be safe.

This afternoon, Minister for Health Simon Harris said the advice from doctors to the people of Ireland is that for people to keep themselves safe and well, they need to keep two metres away from others.

He said other countries had taken differing views but it was up to our National Public Health Emergency Team to scan all the available advice and advise the Government accordingly.

If a person was two metres away from another person, they were less likely to be infected by droplets from that person, he said. He said the issue was under constant review by NPHET. 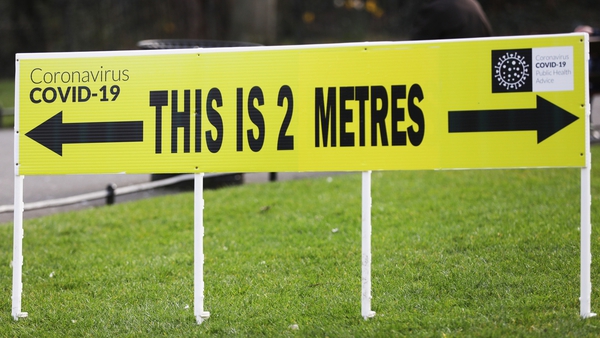