India has extended its coronavirus lockdown to the end of the month as it reported its biggest single-day jump in cases, but said some sectors would be permitted to open up as its economy takes a hammering.

The lockdown affecting 1.3 billion people - the world's largest - has been in force since late March and has been devastating for India's poor, with millions of migrant workers losing their jobs.

"Lockdown measures to contain the spread of Covid-19 will continue for a period of up to (May 31)," the Home Affairs Ministry said in a statement.

Schools, places of worship, shopping malls, cinemas and gyms must remain closed, the ministry said, adding bans on large gatherings for religious and sporting events would also be extended.

Restaurants will now be allowed to operate their kitchens for takeaway services while sports complexes and stadiums are permitted to host events, but without spectators.

The National Disaster Management Authority said the restrictions would be updated "as necessary, keeping in view the need to open up economic activities" in Asia's third-biggest economy while containing the virus.

Further state-based details were expected to be finalised later Sunday.

The lockdown extension came as India recorded its biggest single-day jump in virus cases with 4,987 new infections in the last 24 hours. Virus death toll in Brazil rises to more than 15,000

The number of confirmed Covid-19 cases in Brazil has soared to over 230,000, surpassing that of Spain and Italy which were once the epicentre of the pandemic, and making Brazil's outbreak the fourth largest in the world, according to official figures.

The country's death toll has also risen past 15,000 according to official data.

With 15,633 deaths and 233,142 confirmed cases, Brazil - whose president Jair Bolsonaro has dismissed the virus as a "little flu" - is at the epicentre of infections in Latin America.

Experts say under-testing means the real figures could be 15 times higher or more, and warn the worst is yet to come.

The sprawling South American country registered 816 deaths and 14,919 new cases in the past 24 hours.

Despite the rising tolls, Mr Bolsonaro has attacked lockdown measures taken by some governors to contain the spread of the virus.

"Unemployment, hunger and misery will be the future of those who support the tyranny of total isolation," the far-right president tweeted, a day after his Health Minister Nelson Teich resigned after less than a month on the job.

The president insists business closures and stay-at-home orders are unnecessarily damaging the economy.

More than half a million coronavirus infections have been recorded in Latin America and the Caribbean, according to an AFP tally based on official reports. 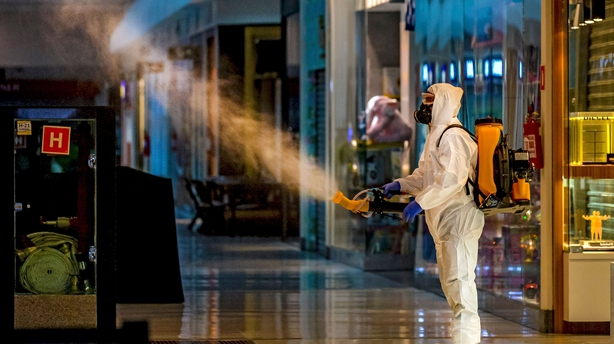 The tallies, using data collected by AFP from national authorities and information from the World Health Organization, probably reflect only a fraction of the actual number, as many countries are testing only the most serious cases.

More than 4.6 million people have been infected around the world since the virus first appeared in China late last year, while more than 1.6 million have recovered.

It comes as the United States recorded a further 1,237 deaths linked to the virus in the past 24 hours, bringing its grim total to 88,730.

The country - hardest hit by the pandemic in terms of the number of fatalities - has now confirmed a total of 1,466,682 cases, according to a tally from Johns Hopkins University.

Meanwhile, mainland China reported five new confirmed cases of the virus, down from eight the previous day, the National Health Commission said in a statement.

Two of the five confirmed cases are so-called imported infections, while three are locally transmitted in northeastern Jilin Province.

The number of new asymptomatic cases of the coronavirus fell to 12 from 13, the NHC said.

Elsewhere, Nepal has reported its first coronavirus death late - a 29-year-old woman who recently gave birth - as the total number of people infected in the country reached 281.

The victim was on her way to a hospital for treatment when she died.

"It has been proven that is this the first case of death caused by Covid-19 in Nepal," the deputy spokesman for the health ministry, Samir Kumar Adhikari, said in a statement.

The woman gave birth at a hospital in Kathmandu on 6 May and then returned to her home a day later.