Violence hit parts of Delhi overnight as gangs roamed streets littered with the debris of days of sectarian riots that have killed 32 people, police said.

The unrest is the latest bout of violence over Prime Minister Narendra Modi's citizenship law, which triggered months of demonstrations that turned deadly in December.

Sunil Kumar, director of the Guru Teg Bahadur (GTB) Hospital, said the hospital registered 30 deaths while the chief doctor at Lok Nayak Hospital said that two people had died there.

"All of them (at the GTB) had gunshot injuries" Mr Kumar said.

The new fatalities were all from the violence on Monday and Tuesday when mobs of Hindus and Muslims fought running battles. "Some distress calls were made and the force provided immediate assistance," he said. 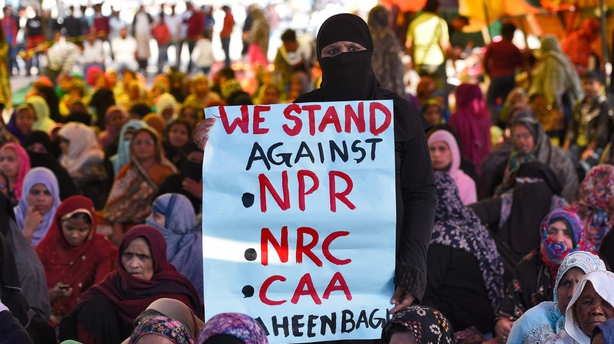 The initial violence erupted late on Sunday after Hindu groups objected to Muslims holding a street demonstration over the citizenship law.

Mobs armed with swords and guns set fire to thousands of properties and vehicles. Locals complained that police did nothing to stop the violence.

In December, at least 30 people were killed, mostly in police action in northern Uttar Pradesh state, a part of the country with a significant Muslim population. Many Muslims believe the citizenship law in combination of a mooted citizens' register will leave them stateless.

It is part of a plan by Mr Modi's right-wing ruling party to turn officially secular India into a Hindu nation.

His party has denied the allegations but in recent weeks members have called protesters "anti-nationals" and "jihadists", with some calling for them to be jailed or even shot dead.