Mr Modi denies this, tweeting that the new law "does not affect any citizen of India of any religion,'' while accusing "vested interest groups" of stoking the "deeply distressing" unrest.

The former chief of the opposition Congress party, Rahul Gandhi, tweeted that the law and a mooted nationwide register of citizens also seen as anti-Muslim were "weapons of mass polarisation unleashed by fascists".

Human Rights Watch (HRW) called for police across the nation to show restraint, amid claims that authorities were using unnecessary or excessive force to quell the unrest in several cities.

HRW's South Asia director Meenakshi Ganguly: "The Indian government should address the concerns raised about the citizenship law instead of trying to shut down the protests with excessive force."

The UN human rights office said last week it was concerned the law "would appear to undermine the commitment to equality before the law enshrined in India's constitution", while Washington and the European Union have also expressed unease. 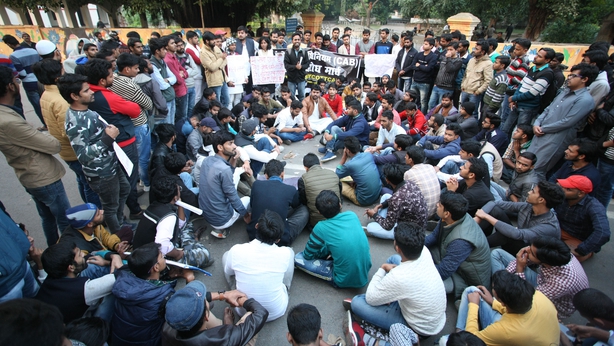 The northeast, where allowing citizenship for any foreign migrants is opposed by many locals and which in recent days has been the epicentre of protests with six people dead, also saw fresh demonstrations.

The chief minister's office said that a curfew in four districts of the northeastern state of Assam would be lifted completely at 6am on Tuesday.

Broadband internet would also be restored on tomorrow, officials said, but there was no mention of whether mobile internet, which has been blocked for several days, would be reinstated.

Ten people remain in hospital with gunshot wounds, while 190 people have been detained.

In the east in Kolkata, capital of West Bengal state, more than 10,000 people took to the streets for a march led by state premier Mamata Banerjee, a firebrand opponent of Mr Modi.

Ms Banerjee told the crowd that the law would be implemented in her state "over my dead body," Indian media reported.

State police said they fired tear gas to disperse hundreds of protesters elsewhere after they threw stones. More than 350 people were detained.

No major incidents were reported nationwide, although several metro stations were closed in Delhi as demonstrations there continued for a second day.