Protesters from both sides of the abortion debate have gathered in Belfast for separate rallies.

A Rally for Choice convened at Writers' Square in support of recent Westminster legislation which plans to trigger a liberalisation of abortion legislation if no cross-party Executive is formed at Stormont by 21 October.

Marchers held signs and posters that read: "The north is now" - which has become a rallying cry for pro-choice activists after the Republic of Ireland's landslide referendum to liberalise their own abortion laws in 2018.

Grainne Teggart, of Amnesty International, said the rights of women can no longer be denied.

She added: "Today's rally comes at a critical time. Following recent law reform at Westminster we will soon have decriminalisation of abortion and free, safe and legal and local services.

"For those facing prosecution this cannot come quickly enough.

"After many years of fighting, we are finally getting the equality we deserve. Any return to Stormont before October 21 must only happen with agreement on abortion reform on exactly the same terms as has been secured at Westminster.

"These rights have been long and hard-fought for, and we will not accept our rights being sacrificed for political expediency," she said, adding: "The north is now - we are determined to make this a reality." 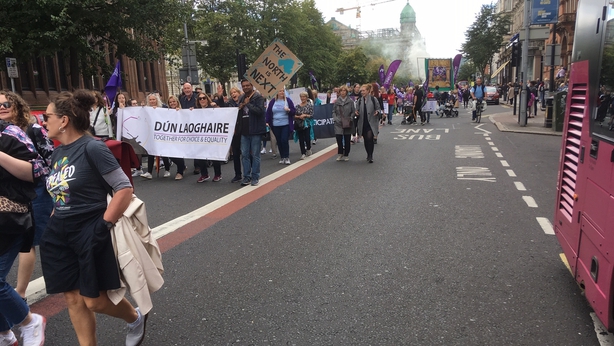 Speaking after attending the demonstration, Sinn Fein MLA Caral Ni Chuilin said: "Current legislation in the north is failing women and remains incompatible with the European Convention on Human Rights.

"The issue of women's healthcare should be dealt with through legislative change.

"The first step in this process should be the repeal of draconian British legislation which criminalises women," she said.

As the Rally For Choice march passed Belfast's Albert Clock, a group from the March For Their Lives protest which gathered in Custom House Square brandished anti-abortion posters. There were no reports of incidents.

The main speaker scheduled to address the March For Their Lives rally was Baroness Nuala O’Loan, a former Police Ombudsman.

Protesters gathered to hear her following a march which began at 2pm at Custom House Square. 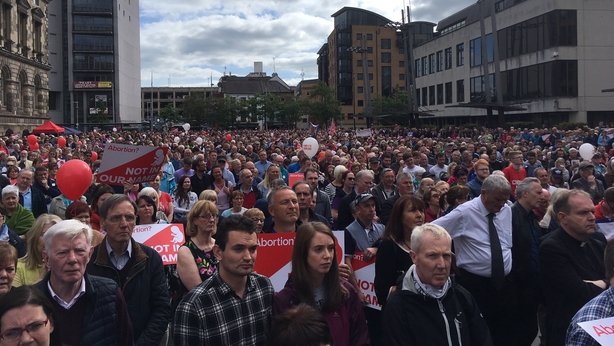 They were joined by the DUP leader, Arlene Foster and the leader of the Ulster Unionist Party, Robin Swann.

The proposed liberalisation would introduce Westminster's 1967 Abortion Act to Northern Ireland for the first time.

Currently, abortion is legal in the region when there is a risk to the physical or mental health of the mother or the foetus with long-term consequences.

The British government pays the costs of a woman resident in Northern Ireland who travels to Britain for an abortion.