Brazil's President Jair Bolsonaro has authorised the deployment of armed forces to help fight fires raging in the Amazon and crack down on criminal activities in the region.

The decree applies to indigenous territories, conservation areas as well as other regions in the Brazilian states spanning the world's largest rainforest.

Earlier, the head of the armed forces Edson Leal Pujol said the Brazilian army was ready to defend the rainforest amid increasing international pressure and calls for tough action to combat fires sweeping through the forest.

"To the unwary who insist on safeguarding the purposes of the Brazilian Amazon, make no mistake, soldiers will always be alert and vigilant, ready to defend and repel any kind of threat", Mr Pujol said in a speech during a Soldier's Day ceremony in Brasilia.

His comments come as Brazilian President Jair Bolsonaro said the army may be enlisted to help combat the fires.

When asked earlier by reporters in Brasilia if he would send in the army, Mr Bolsonaro responded: "That is the expectation." 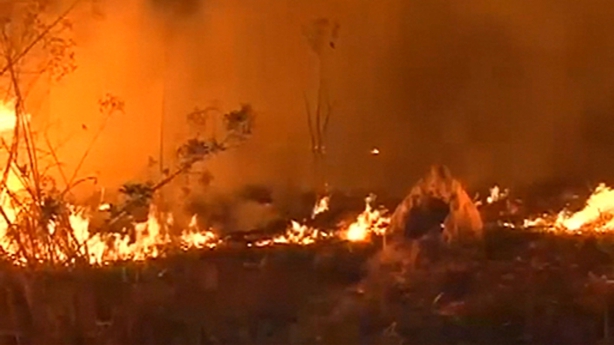 The right-wing president added the decision would be made at a top-level meeting later in the day.

Mr Bolsonaro was due to meet with a team that included the defence and environment ministers and the foreign minister this afternoon.

The latest official figures show 76,720 forest fires were recorded in Brazil so far this year, the highest number for any year since 2013. More than half are in the Amazon.

It comes as France and the United Nations called for the protection of the Amazon rainforest as Mr Bolsonaro accused his French counterpart of having a "colonialist mentality" over the issue.

Taoiseach Leo Varadkar has said that Ireland will not vote for the EU-Mercosur Free Trade Agreement if Brazil does not honour its environmental commitments.

Amid record fires in the Amazon, crowds protest at Brazilian embassies | https://t.co/JThd5AFXGI pic.twitter.com/BBq4ZlzxHL

UN chief Antonio Guterres said he was "deeply concerned" by the fires.

"In the midst of the global climate crisis, we cannot afford more damage to a major source of oxygen and biodiversity," he said on Twitter.

"The Amazon must be protected."

French President Emmanuel Macron said the wildfires were "an international crisis" and called on the globe's most industrialised nations to address it at the G7 summit this weekend.

"Our house is on fire. Literally. The Amazon, the lung of our planet which produces 20% of our oxygen is burning," Mr Macron said on Twitter.

But the photograph used by the French leader does not show this year's fires. A reverse image search showed that it was taken by the American photojournalist Loren McIntyre, who died in 2003.

Our house is burning. Literally. The Amazon rain forest - the lungs which produces 20% of our planet's oxygen - is on fire. It is an international crisis. Members of the G7 Summit, let's discuss this emergency first order in two days! #ActForTheAmazon pic.twitter.com/dogOJj9big

Mr Bolsonaro responded on Twitter: "The French president's suggestion that Amazon issues be discussed at the G-7 without participation by the countries in the region evokes a colonialist mentality that is out of place in the 21st century."

But German Chancellor Angela Merkel said the fires raging in the Amazon amount to an "acute emergency" and said it should be discussed by world leaders at the G7 summit, her spokesman said.

"The extent of the fires in the Amazon area is shocking and threatening and not only for Brazil and the other affected countries, but also for the whole world," Steffen Seibert told journalists in Berlin.

"When the G7 comes together this weekend, then the chancellor is convinced that this acute emergency of the Amazon rainforest belongs on the agenda," added Mr Seibert, saying that Ms Merkel backs the French President's call on the G7 to address the issue at the summit in Biarritz.

AFP map locating wildfires in the #Amazon as of August 22-23 @AFPgraphics pic.twitter.com/pBEq47sBuc

Peru, which contains much of the Amazon basin, announced it was "on alert" for wildfires spreading from the rainforest in Brazil and Bolivia.

Paraguay and Bolivia are battling separate wildfires that have devastated large areas of their rainforests.

Environmental specialists say the fires have accompanied a rapid rate of deforestation in the Amazon region, which in July quadrupled compared to the same month in 2018, according to data from the National Institute for Space Research (INPE).

Mr Bolsonaro instead attributes the fires to increased drought, and accuses environmental groups and NGOs of whipping up an "environmental psychosis" to harm Brazil's economic interests.

His comments come as Brazil hosts a UN regional meeting on climate change in the northeastern city of Salvador ahead of December's summit in Chile.

Meanwhile, a senior Brazilian official defended Brazil's environmental policy at the a UN regional meeting on climate change and said it complied with the Paris Agreement against global warming.

"We are teaching the world how to produce. In only 29% of our territory we produce food for everyone.

"Worldwide, the average land use for agriculture exceeds 50% - we only use 29%," said Roberto Castelo, an environment ministry official.

"I do not defend the burnings, because there always was and always will be burnings. Unfortunately, this has always happened in the Amazon," Mr Bolsonaro said, referring to dry season, land-clearing fires.

"But accusing me of being a Captain Nero setting fire to things is irresponsible. It is campaigning against Brazil," the president told reporters outside his Brasilia residence.

The reference to Captain Nero appeared to be to the Roman emperor said to have fiddled while Rome burned. Mr Bolsonaro is a former army captain.