British Prime Minister Theresa May has said she will step down as leader of the Conservative Party on 7 June.

She met the leader of backbench Conservatives, Graham Brady, to discuss her future this morning after her authority was left in tatters following the backlash against her "new Brexit deal".

Senior ministers set out their concerns in "frank" talks with the beleaguered premier as Downing Street delayed publication of the Withdrawal Agreement Bill, which sets out her Brexit plan in law.

The leader of the party automatically becomes the prime minister.

In a speech outside 10 Downing Street, Mrs May said she had done her best to deliver a Brexit deal.

"I have striven to make the UK a country that works not just for a privileged few but for everyone and to honour the result of the EU referendum," she said.

Mrs May said she had done "everything I can" to gain support for her Brexit deal.

Theresa May to stand down as Conservative Party leader | Read more: https://t.co/pyPnzAKkBm pic.twitter.com/s1sefb3Aqj

However she said it is now in the "best interests of the country for a new prime minister to lead that effort".

"So I am today announcing that I will resign as leader of the Conservative and Unionist Party on Friday 7 June so that a successor can be chosen."

Mrs May said that the process of electing her successor would begin the week after she finally stepped down as Conservative leader.

She said that she had informed the Queen that she would continue to serve as Prime Minister until that process was complete.

Mrs May, her voice cracking, concluded her speech saying: "I will shortly leave the job that it has been the honour of my life to hold.

"The second female prime minister, but certainly not the last. I do so with no ill will, but with enormous and enduring gratitude to have had the opportunity to serve the country I love."

Paying tribute to Mrs May, the Taoiseach Leo Varadkar described her as principled, honourable and deeply passionate about doing the best for her country.

Democratic Unionist Party Leader Arlene Foster thanked Mrs May for her willingness to recognise the Northern Ireland's need for additional resources through the confidence and supply arrangement between the Conservatives and DUP.

Sinn Fein Leader Mary Lou McDonald said that irrespective of who succeeds Mrs May the basic protections of the Northern Ireland backstop - guaranteeing no hard border on the island of Ireland - remain the bottom line.

Read More:
'A bloody difficult woman' with a bloody difficult job
Varadkar pays tribute to 'principled and honourable' May
Likely candidates to replace Theresa May as British Prime Minister

The humiliating spectacle of Mrs May, who will become one of Britain's shortest-serving post-WWII prime ministers, detailing her own departure date follows a fresh revolt to her latest Brexit plan this week among cabinet colleagues and Tory MPs.

The embattled leader has previously said she would step aside once her unpopular EU divorce deal had been passed by parliament, and launched a fresh bid Tuesday for lawmakers to approve it in early June.

The government has now postponed that vote.

Mrs May's latest proposals, which included giving them the option of holding a referendum on the deal, prompted a furious reaction from Conservatives - including cabinet members.

Mrs May said that in order to deliver Brexit, her successor would have to build a consensus in Parliament.

"It is and will always remain a matter of deep regret that I have not been able to deliver Brexit," she said.

"It will be for my successor to seek a way forward that honours the result of the referendum.

"To succeed, he or she will have to find consensus in Parliament where I have not.

"Such a consensus can only be reached if those on all sides of the debate are willing to compromise." 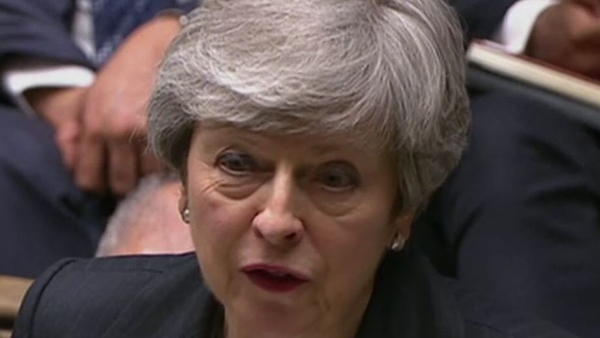