British Prime Minister Theresa May has fired the starting gun on a Tory leadership race after she announces her departure as Prime Minister.

Mrs May is to step down as leader of the Conservative Party on Friday 7 June, with the process to replace her set to begin the following week.

Firstly candidates must be nominated by two Conservative MPs.

If only one candidate comes forward, he or she becomes leader, but a coronation appears unlikely given the crowded field of leadership hopefuls already jostling for position.

The list of candidates is whittled down to a shortlist of two in a series of votes by Conservative MPs.

The final pair then go to a postal ballot of all party members.

Several potential candidates have already set out their stalls in previous weeks as Mrs May's tenure hung by a thread.

Here are nine of the MPs who have suggested, or stated, they will stand for the job.

The Health Secretary, 40, has refused to rule himself out and said he has a "strong view about the sort of leader we need".

A leader should put the Tories "four-square in the centre ground", Mr Hancock believes.

The former Work and Pensions Secretary said she believes the next leader should be someone who "believes in Brexit" as she hinted at a leadership bid.

Ms McVey, 51, who quit the cabinet over Brexit in November, has said it is "essential" Britain leaves the EU by the end of October.

The Home Secretary has said "there won't be a shortage of candidates" and teased "you'll just have to wait and see" whether he chooses to run.

However the 49-year-old is expected to be a popular candidate, with policies including his hard stance on the return of Shamima Begum, the former Bethnal Green schoolgirl who joined the so-called Islamic State group, boosting his position among some colleagues. 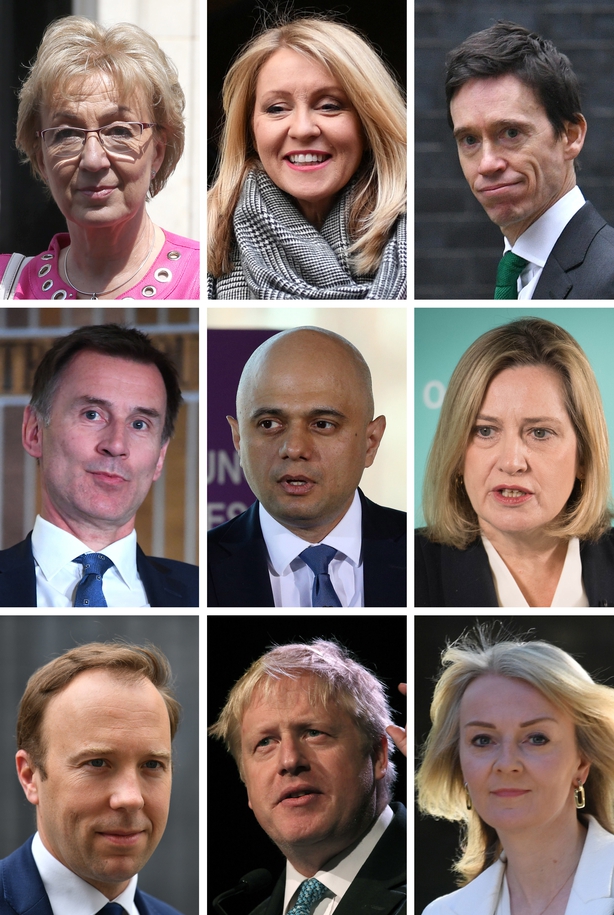 Former Foreign Secretary and London mayor Mr Johnson, 54, is considered by most as the favourite to win the leadership race.

He has already confirmed he will stand, telling a business event "of course I'm going to go for it".

The Work and Pensions Secretary, 55, has refused to rule out running and said she is "keeping the door slightly ajar" to the possibility.

Ms Rudd is one of the most senior Remain-supporting Tories, and has regained standing in the Government since resigning in April 2018 over the Windrush scandal.

The International Development Secretary, 46, began his leadership bid in an interview with The Spectator last month.

"If you want someone who really enjoys doing stuff and loves government and is really proud of the country and feel that's their thing, I'm really enthusiastic," he said.

Ms Leadsom, 56, has previously revealed that she was "seriously considering" running for the Conservative leadership.

The Leader of the House of Commons described the UK's continued membership of the EU as "disgusting" and claimed that a Eurosceptic prime minister would have delivered Brexit already.

The Foreign Secretary, 52, identifies as a one-nation conservative, campaigned for Remain in the 2016 referendum and would be a moderate candidate on Brexit in the leadership election.

Ms Truss, 43, the Chief Secretary to the Treasury, is among a few Tory MPs to have used social media to hint at a possible leadership bid.

She has said the Conservative party needs to "reinvent" itself.