Two men have been arrested by the PSNI in connection with the murder of Lyra McKee in Derry on Thursday night.

The men, aged 18 and 19, were arrested in the Creggan area early this morning under anti-terrorism legislation.

They have been taken to Musgrave Serious Crime Suite in Belfast for questioning.

The published author, from Belfast, was shot in the head by who police believe were dissident republicans linked to the New IRA, as they clashed with police on the Creggan estate in Derry on Thursday night.

CCTV released by the PSNI captured her final moments at around 10pm, when she stood among a crowd of other innocent bystanders and raised her phone in the air, apparently to photograph the violence.

Shaky mobile phone footage also released by detectives showed a masked gunman lean from behind cover and appear to fire shots towards police and onlookers.

Police, who described the shooting as a "terrorist incident", believe the violence was orchestrated in response to an earlier search by officers aimed at averting imminent trouble associated with this week's anniversary of the Easter Rising.

Around 50 petrol bombs were thrown in the confrontation and two cars were burned out.

Officers believe more than one person was involved in the murder.

In the video footage an accomplice beside the gunman appears to crouch and pick something up from the spot where the shots were fired.

Detective Superintendent Jason Murphy, who leads the inquiry, described the murder as "senseless and appalling beyond belief".

"People saw the gunman and people saw those who goaded young people out onto the streets, people know who they are," he said. 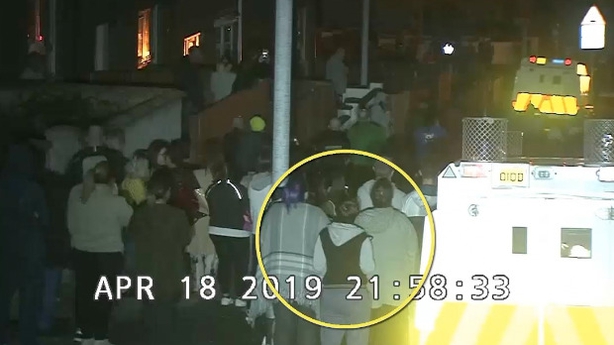 "The answers to what happened last night lie within the community.

"I am asking people to do the right thing for Lyra McKee, for her family and for the city of Derry and help us stop this madness."

He said police have already received "a large number of calls and information".

Deputy Chief Constable Stephen Martin addressed the suspects directly at a press conference, saying: "This was not done to further any cause, this will have achieved nothing other than to plunge a family into grief."

"My deepest condolences go to her family, friends and colleagues," Mrs May said. "She was a journalist who died doing her job with great courage."

Mr Varadkar added: "We cannot allow those who want to propagate violence, fear and hate to drag us back to the past."

Heartbroken by the murder of Lyra McKee and the violence in Derry. The challenges in NI today are real--but we cannot let go of the last 21 years of hard-won peace and progress. This tragedy is a reminder of how much everyone has to lose if we do.

Mr Clinton tweeted: "Heartbroken by the murder of Lyra McKee and the violence in Derry.

"The challenges in NI today are real-but we cannot let go of the last 21 years of hard-won peace and progress. This tragedy is a reminder of how much everyone has to lose if we do."

The New IRA is an amalgam of armed groups opposed to the peace process and recently claimed responsibility for parcel bombs sent to London and Glasgow in March.

A vigil was held in Creggan in Ms McKee's memory, organised by local residents who said they felt sad and angry.

A minute's silence will be observed at a rally in Belfast in support of the Good Friday Agreement today while there will also be a vigil in Omagh in Co Tyrone this afternoon.

Ms McKee had recently moved to Derry to live with "love of her life", Sara Canning, and was also an editor for California-based news site Mediagazer, a trade publication covering the media industry.

Ms Canning said the 29-year-old's "amazing potential was snuffed out by this single barbaric act".

She added: "Victims and LGBTQIA community are left without a tireless advocate and activist and it has left me without the love of my life, the woman I was planning to grow old with.

"This cannot stand, Lyra's death must not be in vain because her life was a shining light in everyone else's life and her legacy will live on and the life that she has left behind."

Fr Brian D'Arcy has expressed his "extreme sadness" following the death of Ms McKee, describing her as "a very special person".

He added that young people did not comprehend what life would be like if violence were to return to the streets of Northern Ireland.

The EU's chief Brexit negotiator Michel Barnier said the murder of Ms McKee was "a reminder of how fragile peace still is in Northern Ireland", adding: "We must all work to preserve the achievements of the Good Friday Agreement."

The Minister of State with Special Responsibility for Disabilities, Finian McGrath, has said the murder was a "horrific thing" to happen around the anniversary of the Good Friday Agreement.

Speaking to Brendan O'Connor on RTÉ Radio One he said the executive in the north needs to get up and running again.

He said it was time for everyone to sit down together if they are serious about honouring the memory of Ms McKee. 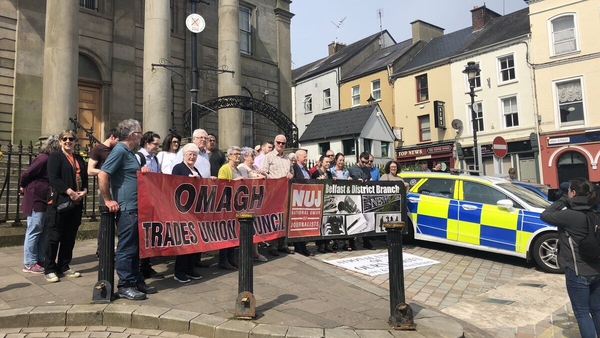