The threat of a hard border, the future of Ireland beyond Brexit, and the lack of devolved government at Stormont were at the centre of a number of gatherings on Saturday.

The Co Louth border protest, organised by Border Communties against Brexit, took place on the old Dublin road near Carrickcaron.

A mock wall was built across part of the border as part of the demonstration. The theatrical gesture is the centre-piece of the protest which takes place at Carrickcarnan between Dundalk and Newry.

And a mock checkpoint manned by actors dressed as soldiers and customs officers was also constructed at the protest.

Security towers manned by the British army near Newry were decommissioned in 2003 as it ended conflict-era operations in Northern Ireland in support of the police.

A mock tower is erected during a Brexit demonstration on the border near Dundalk. @rtenews pic.twitter.com/eLWeArTc0O

Border Communties against Brexit say the local community will not tolerate a hard border.

As the Brexit deadline looms, they want to highlight how it could detrimentally impact on the region.

Demonstrator Tom Murray, from Co Donegal, said it is British Prime Minister Theresa May's responsibility to sort out the issue.

"We will not accept this border, we demand that London sort out the problem that they created," he said.

It is more than 20 years since the 1998 Good Friday Agreement which largely ended decades of violence.

Mr Murray added: "All the peace and prosperity that we have enjoyed will be destroyed by a hard border.

"Communities could be dragged back into the old days of living in the shadow of someone else's border.

"We are the people who will suffer the most."

The day before, a spokesman for Taoiseach Leo Varadkar said the Government has no plans to deploy Irish soldiers on the border.

The clarification came after Mr Varadkar was heavily criticised for comments he made in Davos about a worst-case scenario, in which there could be a possible army presence to patrol a hard border.

Mr Varadkar said that in the context of Irish politics and history, physical infrastructure on the border would become a target and that the backstop was needed to avoid a hard border.

Conference takes place on future of Ireland after Brexit 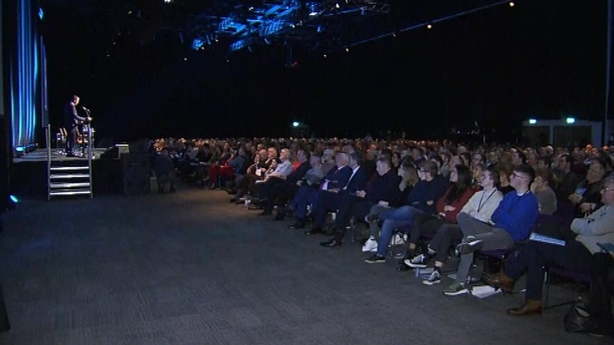 Meanwhile, up to 1,500 people attended a conference in Belfast to discuss the issue of the future of Ireland beyond Brexit.

Senior figures from Fine Gael, Fianna Fáil, Sinn Féin and the SDLP were among the list of speakers.

The conference was held in Belfast's Waterfront Hall.

The gathering has its roots in a letter written by 200 Irish citizens, living in Northern Ireland, to Taoiseach Leo Varadkar in December 2017.

They were concerned about the problems in power-sharing, the future of the Good Friday Agreement and the implications of Brexit.

In the intervening months, that movement has grown. One of the organisers is a Belfast-based solicitor, Niall Murphy.

In his speech this afternoon, Mr Murphy reminded the Taoiseach of comments he once made, where he said: "To the nationalist people in Northern Ireland, your birth right as Irish citizens and therefore as EU citizens will be protected. There will be no hard border on our island. You will never again be left behind by an Irish Government."

Mr Murphy said to the Taoiseach that this assurance cannot simply be a historical quote, and that it must be a living commitment.

Get back to work, protesters tell Northern Ireland Assembly members 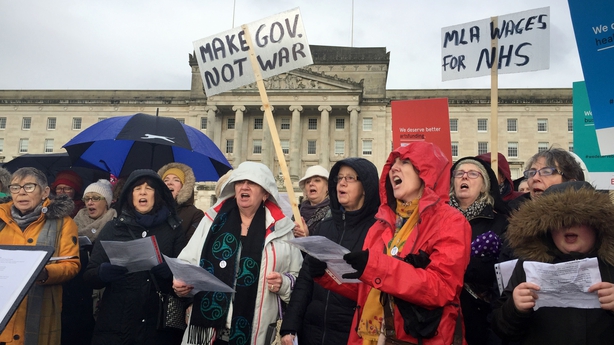 At Stormont, hundreds of people gathered to protest over the ongoing lack of devolved government in Northern Ireland.

Around 200 demonstrators braved wintry weather in Belfast to call on Assembly members to "get back to work", expressing anger at the almost £9 million paid in wages to MLAs during the two years since power-sharing collapsed.

The protest, titled #Back2Work, was the latest event staged by a region-wide movement led by people exasperated by the impasse.

The We Deserve Better campaign held rallies across Northern Ireland last year, while at the start of January its founder - Co Fermanagh teacher Dylan Quinn - walked 90 miles from Enniskillen to Stormont to highlight the message.

Workers in the health and education sectors addressed today's rally at the front of Parliament Buildings, laying out in stark terms the worsening impact of the political deadlock.

Despite the rain the mood was upbeat, with young and old placard-waving protesters entertained by a samba band.

A community choir also led the crowd in singing, with lyrics of popular songs adapted to suit the theme of the day.

One of the event organisers Gareth Burns, a gardener from Kircubbin, Co Down, said the public had already established that they "deserved better", so now they were "demanding better" from their MLAs.

"We want to send the message out that we don't want another year to go by without a devolved administration in Northern Ireland," he said.

"The emphasis is on those services that are suffering as a result of the impasse."

The rally was staged to mark the two-year anniversary of the formal dissolution of the Assembly.

The last Democratic Unionist/Sinn Féin-led coalition imploded amid a row over a botched green energy scheme.

The wrangle over the Renewable Heat Incentive (RHI) was soon overtaken by disputes over the Irish language, the region's ban on same-sex marriage and the toxic legacy of the Troubles.

A number of attempts to find a negotiated deal to restore the institutions have ended in failure.

There is no imminent prospect of another talks process, with the crisis seemingly in drift as political attention focuses on Brexit.