Taoiseach Leo Varadkar has raised the prospect of a return of soldiers to the border, in his most explicit warning yet of the consequences of Brexit going badly awry.

In an interview with Bloomberg, Mr Varadkar was asked to paint a picture of what a hard border would look like if things went badly wrong with Brexit negotiations.

The Taoiseach said it could "involve people in uniform and it may involve the need, for example, for cameras, physical infrastructure, possibly a police presence, or an army presence to back it up".

"The problem with that in the context of Irish politics and history is those things become targets."

Mr Varadkar was speaking to Bloomberg Television at the World Economic Forum in Davos.

This evening, a Government spokesperson told RTÉ that Mr Varadkar was not referring to Irish personnel in his comments and the Government had no plans to deploy infrastructure or personnel at the border.

The spokesperson added that Mr Varadkar's reference to soldiers was about British soldiers.

In the same interview with Bloomberg Television earlier today, Mr Varadkar said the backstop, designed to avoid the return of border infrastructure, is needed to ensure those scenes never materialised.

He offered little hope to UK Prime Minister Theresa May that he might be prepared to dilute the fix.

Instead, he turned the onus back on London to find solutions, asking why Ireland, "victimised" by Brexit, should be constantly asked to compromise.

"The UK wanted a review clause in the backstop and we agreed to that, the UK wanted a UK-wide element, so why is it the country that is being victimised is the one that's always asked to give?"

The Taoiseach said he had not yet seen any technologies that could solve the border issue and that Ireland would not be giving up the backstop for a promise that it would be dealt with later.

Mr Varadkar said: "They don't exist and nobody has been able to show them to me.

"Why would we give up a legal guarantee and something we know will work in practice for a promise to sort it out later, or a promise to invent technologies? That's just not a serious position.

"People who say they're against a hard border and also against a backstop. That's a contradiction."

Mr Varadkar said it was "very unlikely" that Brexit would never happen. He said Ireland and the EU could "help" the negotiations.

"But ultimately it's the people who caused all this and started this who have to come up with the solutions. We can help."

He added that the EU would be "open to making changes" to the Political Declaration on the future relationship between the UK and the EU.

When the Taoiseach tells an audience in Davos that the Army may have to be sent to the border, he is contradicting everything that we have been told (by him and the Tánaiste) about preparations. It is hard to see how this helps our case.

"The Taoiseach's comments are reckless and irresponsible. They are totally contrary to previous assertions regarding the Government's commitment to the backstop," she said.

"The Taoiseach has consistently ruled out a border poll on Irish unity. Today he paints a doomsday scenario of a return of soldiers to the border in the event of a no-deal Brexit.

"If that is the case then the only way to prevent such a scenario is by affording the Irish people their say in the form of a border poll on Irish unity," said Ms McDonald.

An SDLP MLA said the Taoiseach was "upping the ante" with his comments.

Justin McNulty said: "He needs to recognise that using border communities as pawns in a political game of chess is dangerous territory.

"I think it is time for the British Government to pull back from the brink and take no deal off the table."

He said: "Many people are trying to shift the focus away from London onto Dublin this week. I don't think we should allow that to happen. Solutions need to come from where the problem is, which is London, not Dublin."

Mr Coveney added that Ireland's position has been consistent and the negotiation of a Withdrawal Agreement has been successful.

He said: "We need to continue to defend that position."

Mr Coveney said the Irish Government is "not planning for and won't be facilitating physical border infrastructure" between Northern Ireland and the Republic.

"We have a way of doing that, it's called the backstop, which creates time and space for a negotiated future relationship, which I hope will prevent the need for the backstop ever to be used. We still support that approach, as does the British Prime Minister and the EU, which has been repeated over and over again this week," he said.

He said a no-deal Brexit would put pressure on everyone, but that in that scenario, the Irish Government will work to find solutions that will avoid physical border infrastructure.

"It won't be easy, because if there was easy solutions to this they would have been discussed by now. That's why we keep coming back to the backstop, and creating time and space to put a negotiated future relationship in place," Mr Coveney said.

In terms of Britain renegotiating the Withdrawal Agreement, Mr Coveney added if it "wants to change it's red lines, the EU, in my view, will be very generous in its response to any change in those red lines, to try to facilitate the UK, which we have always tried to do".

He said this is the position maintained by the Taoiseach and the Government since the outset of discussions on Brexit.

Mr O'Donovan told RTÉ’s Six One News that Mr Varadkar's comments this morning were articulating the sort of border that we do not want to go back to. 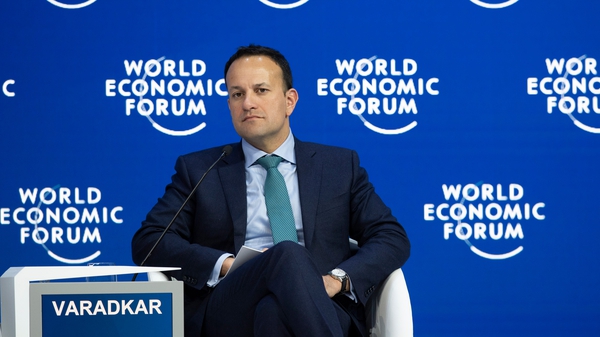