French President Emmanuel Macron used an address to world leaders, who were gathered in Paris for Armistice commemorations today, to send a stern message about the dangers of nationalism, calling it a "betrayal" of moral values.

With US President Donald Trump and Russian President Vladimir Putin sitting nearby, listening to the speech via translation earpieces, Mr Macron denounced those who evoke nationalist sentiment to disadvantage others. "Patriotism is the exact opposite of nationalism: nationalism is a betrayal of patriotism," Macron said in a 20-minute address delivered from under the Arc de Triomphe to mark the 100th anniversary of the end of World War I.

"By pursuing our own interests first, with no regard to others, we erase the very thing that a nation holds most precious, that which gives it life and makes it great: its moral values."

Mr Trump, who has pursued 'America First' policies since entering the White House, and in the run-up to the congressional elections this month declared himself a "nationalist", sat still and stony-faced in the front row as the French president spoke.

There was no immediate response from either the White House or the Kremlin to Mr Macron's comments.

Some 70 world leaders gathered under rainy skies at the Arc de Triomphe in Paris today for the solemn ceremony to mark the 100th anniversary of the Armistice.

Mr Macron urged the dozens of world leaders to come together for a joint "fight for peace". 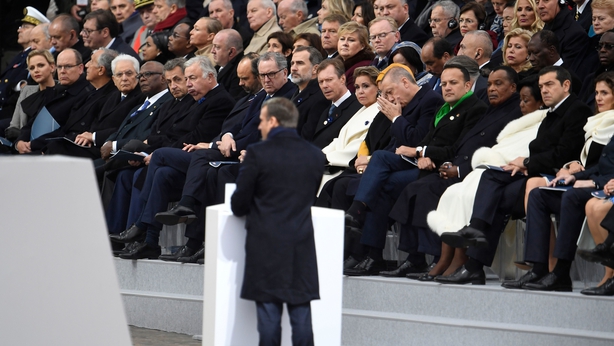 "Let us build our hopes rather than playing our fears against each other," he said.

He called for the leaders to fight "withdrawal, violence and domination".

"Together, we can ward off threats - the spectre of global warming and the destruction of the environment, poverty, hunger, disease, inequalities, ignorance."

After spending a week touring former battlefields, Mr Macron urged leaders not to forget the slaughter, "one hundred years after a massacre whose scars are still visible on the face of the world".

Those who fought in the trenches of WWI lived through an unimaginable hell, Mr Macron said, highlighting that as well as the deaths of 10 million troops, millions of women were widowed and children orphaned.

"The lesson of the Great War can not be that of resentment between peoples, nor should the past be forgotten.

"It is our deeply rooted obligation to think of the future, and to consider what is essential." 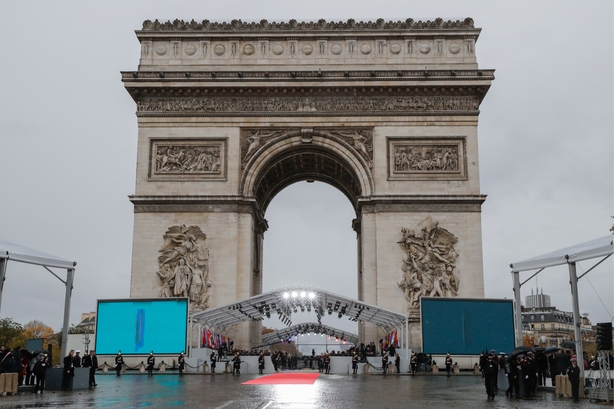 Mr Macron and his wife Brigitte welcomed the leaders to the Élysée Palace this morning, after which they all travelled to the heart of Paris to mark the centenary.

The Paris commemoration is the centrepiece of global tributes and events to honour the 10 million soldiers who were killed during the 1914-18 war and the moment the Armistice, signed in northeastern France, came into effect at 11am on 11 November, 1918.

The world leaders sat for the poignant ceremony under a glass canopy at the foot of the Arc de Triomphe, which was built by Emperor Napoléon in 1806. The last to arrive was Mr Putin, who shook hands with Mr Macron, Ms Merkel and then Mr Trump, briefly giving the US leader a thumbs up. 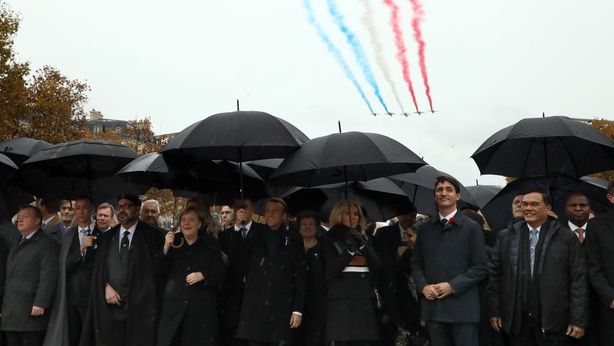 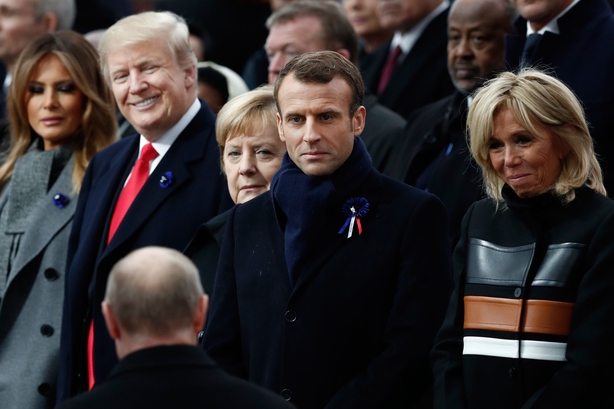 As Mr Trump's convoy made its way up the Champs Elysées to the Arc de Triomphe, a topless protester from the Femen radical feminist group ran towards his motorcade, coming within a few metres, before being apprehended by police.

Photographs of the incident appeared to show that she had the words "fake peacemaker" scrawled across her body.

Mr Macron stood to attention as a military band played La Marseillaise, the French national anthem, before walking through the rain to inspect troops. He then took his place under the arch while cellist Yo-Yo Ma played a movement from a Bach symphony.

Tributes were paid to an unknown soldier who was killed in the war and whose remains are buried with others under the triumphal arch. Afterwards, Mr Macron will host a lunch for the dignitaries at the Élysée. 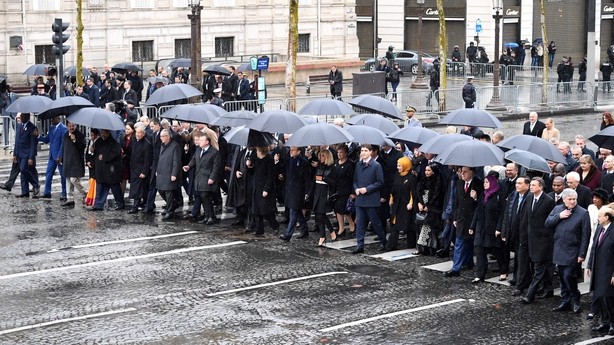 Read more:
Commemorations to mark centenary of ending of WWI
The Irish casualties of World War I
Family ties to WWI remembered on Armistice centenary

In a rare public display of emotion by the world leaders, Mr Macron and Ms Merkel held hands yesterday during a poignant ceremony in the Compiègne Forest, north of Paris, where French and German delegations from the two countries signed the Armistice that ended the war 100 years ago.

The conflict was one of the bloodiest in history, reshaping Europe's politics and demographics. Peace, however, was short-lived, as two decades later Nazi Germany invaded its neighbours. 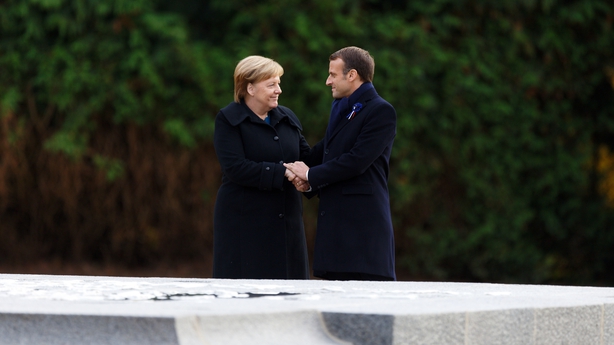 In the week ahead of the commemoration, Macron spent time touring World War I battlefields in northern and eastern France, repeatedly warning in speeches of the resurgence of nationalism, saying it threatened the unity so carefully rebuilt in Europe over the past 70 years.

In one interview, he compared the political tone now to the 1930s, saying complacency towards unbridled nationalism then had opened the way for the rise of Hitler.

In part, his warnings seemed aimed at far-right parties that have gained ground across Europe in recent elections, including in France, where the National Front, now renamed the National Rally, has nudged ahead of Macron's En Marche movement in the polls ahead of European Parliament elections next May.

Besides France, right-wing nationalist or populist parties are on the rise or now have a stake in power in Italy, Hungary, Poland, Austria and Slovenia, among others.

There has been a similar resurgence in nationalist-populist sentiment from Brazil to Turkey and the Philippines, echoing trends in Russia and the United States and challenging the multilateralism that leaders like Macron are keen to preserve.

In his address today, Mr Macron said that "old demons are reawakening" and warned against ignoring the past.

"History sometimes threatens to repeat its tragic patterns, and undermine the legacy of peace we thought we had sealed with the blood of our ancestors," he said.

Asked in late October what he meant when he described himself as a nationalist, Mr Trump cited his love of the country and said it was about putting it first economically. 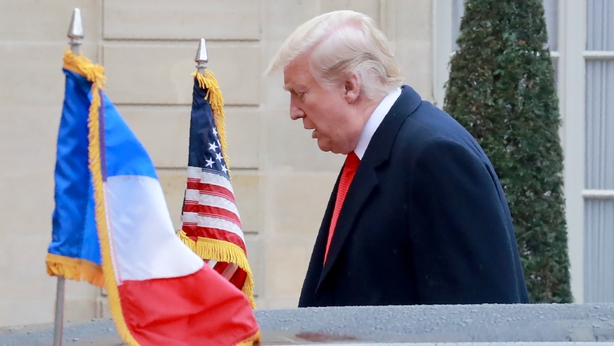 "We're giving all of our wealth, all of our money, to other countries and then they don't treat us properly," he said.

"For many years other countries that are allies of ours...they have not treated our country fairly. So in that sense, I am absolutely a nationalist and I'm proud of it," said Mr Trump.

This afternoon, Mr Macron hosted the inaugural Paris Peace Forum, which seeks to promote a multilateral approach to security and governance and ultimately avoid the errors that led to the outbreak of World War I.

Ms Merkel said in a statement that the forum showed that "today there is a will, and I say this on behalf of Germany with full conviction, to do everything to bring a more peaceful order to the world, even though we know we still have much work to do."

In her speech at the international peace forum this afternoon, German Chancellor Angela Merkel warned of "blinkered nationalism" and the danger of people questioning the "European peace project".

"The concern I have is that blinkered nationalist views may gain ground once again." 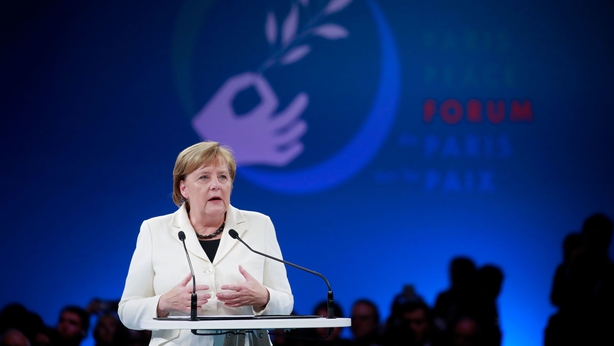 Ms Merkel warned that the benefits of international cooperation, "the peaceful balancing of interests, even the European peace project - people are calling them into question again."

She added: "We know that most of the challenges and threats of today can no longer be solved by one nation alone, but only if we act together."

UN chief Antonio Guterres meanwhile warned of "parallels" between the present day and the unstable and dangerous 1930s in his speech at the Paris forum.

"As I see it, several elements today have many parallels with both the start of the twentieth century and the 1930s, giving us grounds to fear that an unpredictable chain of events could ensue," Mr Guterres said.

He warned about the "polarisation of political life" and rising tensions over trade.

"A weakening of the democratic spirit of compromise and an indifference to collective rules are twin poisons for multilateralism," he added.

Mr Macron gave short opening remarks at the Forum that were similarly downbeat.

He asked how the image of more than 70 world leaders paying their respects to the war dead in Paris today would be remembered.

"Will it be a photograph of the last moment of unity before the world fell into a new disorder?" he asked.

"The world we live in is being undermined by crises which are destabilising our societies," he said, listing climate change, terrorism, cyber-crime and nuclear proliferation.

"We are being undermined by the 'sad passions': nationalism, anti-semitism, extremism..."

Donald Trump did not attend the forum, but Vladimir Putin did. Trump and Putin are expected to have formal talks later this month when both attend a G-20 summit in Buenos Aires.