Pope Francis has opened a month-long gathering of bishops from around the globe at a time of crisis in the Catholic Church over sex abuse.

One bishop has boycotted the meeting and another has stayed at home to deal with fallout from the scandal.

Though the synod's official title is "Young People, Faith and Vocational Discernment," the worldwide sexual abuse scandal looms large in the background and many believed it would be part of the informal agenda in the discussions.

At an opening Mass in St Peter's Square, the Pontiff urged church leaders not to let the next generation's faith be snuffed out by what he called "our own shortcomings, mistakes and sins".

In a sign of the extraordinary pressure the church has come under from the scandal, Archbishop Charles Chaput of Philadelphia had called for the synod to be scrapped so the Vatican could concentrate on preparing another bishops' meeting on preventing sex abuse.

More than 250 other bishops from around the world are taking part in the month-long meeting with about 40 young people invited to take part as observers.

The Irish hierarchy is represented by the Archbishop of Armagh Eamon Martin, who is Primate of All Ireland, and the Bishop of Derry, Donal McKeown.

Two of the synod's bishops are from China, a first following the Vatican's landmark agreement announced 12 days ago that improved ties with the country's Communist government. Applause broke out as the Pope noted their presence in his homily at the Mass attended by tens of thousands of people.

The church is enmeshed in sexual abuse crises in countries including Chile, Germany, the United States and Australia. 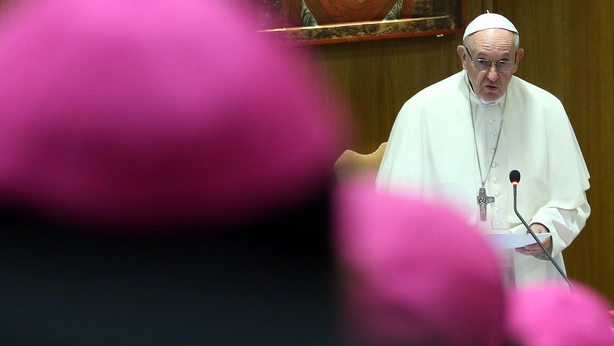 The synod began a day after a new Pew Research Centre survey found that confidence in the way Pope Francis is handling the sexual abuse crisis has dwindled among American Catholics.

While seven-in-ten American Catholics said the overall opinion of the Argentinean Pontiff was favourable, six-in-ten said Francis was doing an "only fair" or "poor" job handling the abuse scandal, nearly double the figure at the beginning of 2018.

Later, in a speech at the first working session, Pope Francis said he hoped the synod, which will result in a papal document, would "awaken our hearts" because the church today was laden with "struggles, problems, burdens".

He attacked clericalism, which he defined as a view that priests and bishops are the elite who exercise power. He branded it as "the root of many evils in the church".

Instead, he said, they should be humble and offer "free and generous service" to the faithful.

In a statement this evening the Irish Conference of Bishops revealed that, as part of the preparations for the Synod, bishops met with representatives of youth ministry from around the country to discuss key themes arising from an earlier web-based consultation which they had undertaken with 2,500 young people.

The bishops said it had revealed both positive examples and obstacles facing young people's faith and experiences of growing up in the contemporary world.

A number of Irish young Irish lay Catholics are among the Synod's observers. The proceedings end on Sunday 28 October.

In a statement issued following their two-day quarterly meeting, this country's Catholic Bishops'acknowledged the anger and dismay experienced by many in response to reports from a number of countries over the summer concerning the criminal abuse of children and its cover-up.

"Despite the many reports and serious findings on this subject here in Ireland in recent years, these overseas reports were nonetheless shocking," the Bishops Conference statement said. They welcomed Pope Francis' decision to call the presidents of the world's Bishops' Conferences to a meeting in Rome next February to review the safeguarding of children in the church.

Last March Archbishop Martin commented on the acceptance of the resignation as Bishop of Domore of Dr John McAreavey over criticism by abuse survivors of his response to serial abuses perpetrated by the late Fr Malachy Finegan.

Dr McAreavey was the fifth Irish-based bishop to step down over clerical child sexual abuse scandals.

The primate said his prayers were with the people, religious and clergy of Dromore and in particular with those who have been abused and who were suffering because of abuse.

He reiterated his own Bishops' Conference's view that the church can never become complacent concerning the safeguarding of children.