The Irish Tax Institute says workers across all salary levels continue to pay more personal tax than they did ten years ago, despite a programme of personal tax reductions over the last seven years.

The professional body for tax advisors highlights the role of Universal Social Charge in driving increased progressivity in the income tax system.

Progressivity means the more you earn, the more tax you pay - and Ireland's income tax system is recognised for being very progressive.

The institute says USC has been central to driving progressivity, with reductions targeting lower and middle income earners balanced by increases for those earning above €70,000 a year.

Today's tax report shows that the more you earn the greater the percentage decrease in net pay.

The increased tax bills remain despite a programme of personal reductions over the past seven years that include three increases to the USC entry point, 11 USC rate reductions, six USC band widenings, two increases in the entry point into the Top Rate of income tax (40%) and a 1% decrease to that top rate.

The employee PRSI ceiling of €75,036 was also abolished during that period, increasing the PRSI bill for income earners over that salary level. 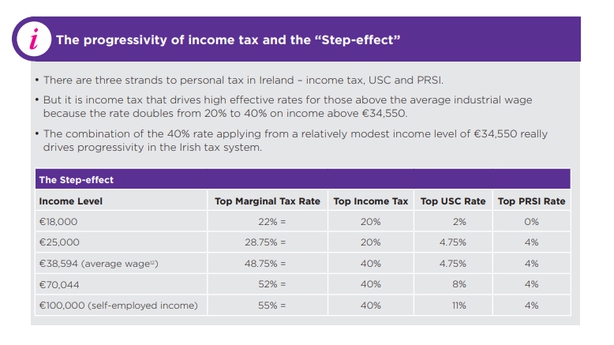 A comparison of the personal tax bill of workers at different salary levels over the past six years also shows the increasing progressivity in the Irish personal tax system.

The USC has been central in making it so.

The combination of USC reductions being targeted at lower to middle income earners and the introduction of a new 8% USC rate on earnings over €70,044 has driven progressivity.

This highlights the increasing progressivity of Ireland’s personal tax system.

The big driver of the increasing level of progressivity between 2012 and 2018 is the USC.

Taking a salary level close to the average wage also highlights the role of the USC in progressivity.

The Irish Tax Institute has also examined progressivity through the idea of a "Tax Freedom Day". 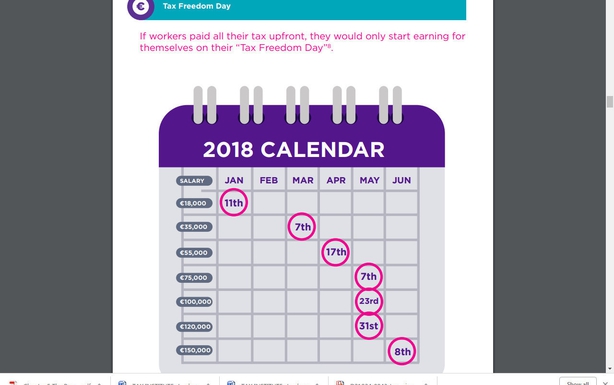 Taking the calendar year, the Institute calculates if workers paid their personal taxes to the Exchequer up front, on what date would they meet their tax obligations and then start earning for themselves.

The "Tax Freedom Day" calculation is another way of demonstrating how progressive the Irish personal tax system is.

Those workers on €18,000 meet their personal tax obligations to the State by 11 January, while workers on €35,000 work until 7 March before they earn for themselves.

Those on €150,000 work until 8 June before their personal tax bill is paid and their earnings are their own.

Separate estimates of the average "Tax Freedom Day" for each EU state by Accountants EY for the Molinari institute in Paris show Ireland has the third earliest "Tax freedom day" in the EU - April 26.

Cyprus has the earliest, on March 27. For 14 of the 28 EU states "Tax Freedom Day"  falls in June, while for a further seven, the day falls in July - including Germany (July 10) and bottom placed France (July 27).