A Belfast priest who was sexually abused in his youth by an older cleric has urged Pope Francis to punish all Catholics who cover up any form of child abuse or who caused devastation by their incompetence.

During yesterday's meeting of survivors with the Pontiff, Father Patrick McCafferty also warned that failure to grapple with the crisis was hindering the Church's capacity to promote the right to life.

His comments were made public as pilgrims attend the Pope's Angelus address in Co Mayo and his mass in Dublin's Phoenix Park.

Fr McCafferty revealed that he told the Pontiff that no Catholics, no matter how highly placed, can be exempt from scrutiny and, if they're found wanting, full accountability for child abuse or its concealment.

In a script of his address released by his Diocese, Down and Connor, Fr McCafferty said he told the Pope the crisis in Ireland over the past 30-odd years has seen the agony prolonged intolerably by the continuous "drip drip" of disturbing revelations.

He warned that failure to grapple with "this sin and crime" it is hindering the Church's capacity to teach about other vital topics, such as the right to life and the importance of marriage.

He assured the Pontiff that help was available to him as the leader of what called "the coalition of the willing" and assured him that progress had been made and that survivors and himself could continue to the next stage.

At the meeting the 81-year-old Pontiff condemned corruption and cover up within the Church as human excrement.

He is expected to return to the theme when he closes the World Meeting of Families at an afternoon mass in the Phoenix Park for which half a million tickets have been allocated.

The first day of the papal visit was dominated by the bitter legacy of historical scandals linked to Church abuse and mistreatment.

The private engagement in Dublin came hours after Pope Francis expressed "pain and shame" over failures to tackle the scandals.

Some of the survivors who attended the behind-closed-doors meeting said the Pontiff employed more blunt language with them, apparently using the Spanish word "caca" - Spanish for excrement - to describe those who covered up abuse.

Abuse survivor Marie Collins, who was at the meeting, told the Press Association: "He was very frank, he listened to us all and he gave us all an opportunity to talk about our experiences."

The leader of the Catholic Church acknowledged that Irish people had a right to be outraged by its response to abuse crimes.

Representatives of the Coalition of Mother and Baby Homes Survivors were also among those who met the Pope.

Paul Jude Redmond and Clodagh Aileen Malone used the opportunity to present a letter to the Pontiff asking for urgent action for Mother and Baby Home survivors and asking for Pope Francis to publicly call on those who ran the homes "to acknowledge their actions and issue an unqualified apology to all the survivors of their institutions".

In a statement, CMABS said Mr Redmond also presented the Pope with a copy of his book, which he inscribed saying he hoped it would inform the Pontiff's response to survivors. 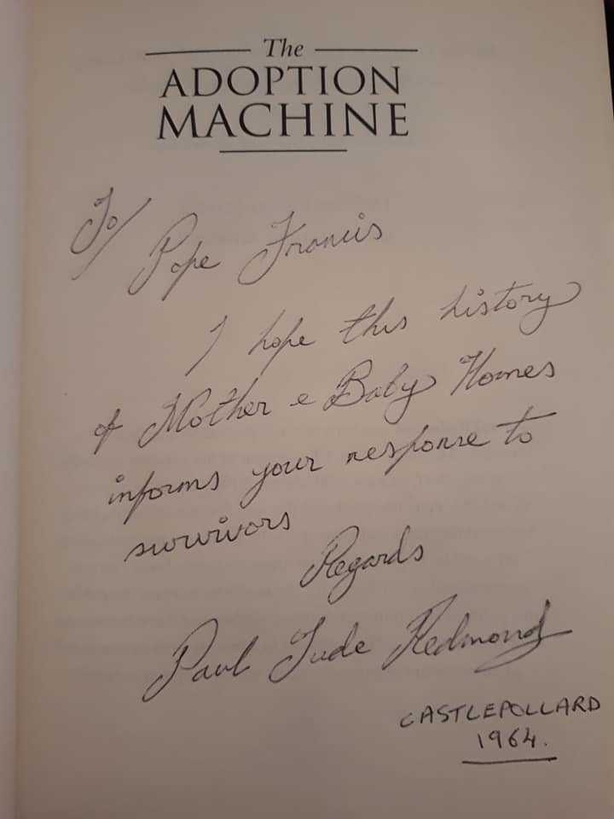 Mr Redmond and Ms Malone said the Pope listened carefully and had his translator write down one of the requests, which he promised to address in today's mass in the Phoenix Park.

At that at the end of the meeting, the Pope referred to an "elite" within the Catholic Church or a "High Church" as he called them, who are effectively blocking or slowing progress, the CMABS said it its statement.

The Pope's decision to address the dark legacy of abuse in a speech in Dublin Castle drew praise in some quarters, but others criticised Pope Francis for not offering a public apology or directly acknowledging the Vatican's role in the failures.

With the reverberations of a litany of clerical sex crimes casting a shadow over the first visit by a pontiff to Ireland since 1979, Pope Francis acknowledged the gravity of what had happened during his address.

Meanwhile, Tánaiste Simon Coveney said the language used by Pope Francis in relation to the people who were hiding or preventing the truth from emerging around sexual abuse scandals was the strongest he had ever heard from a pope.

Speaking on RTÉ's This Week, Mr Coveney said the Pope's commitment to ensure that this never happens again is very welcome.

He said he believed one of the most important things for Pope Francis to do while in Ireland was to meet survivors of abuse.

He said people would clearly be watching now after this visit to see what actions follow his strong language and commitments he has made while in Ireland.

He described Taoiseach Leo Varadkar's speech yesterday at Dublin Castle as "impressive" and said it encapsulated the fact that Ireland is a very different place to what it was in 1979.