One of the survivors who met Pope Francis has said the Pontiff referred to those guilty of involvement in corruption and the cover-up of abuse in the church as "caca", or "filth in the toilet".

Paul Redmond was one of eight survivors of clerical abuse who met Pope Francis at the Papal Nuncio's residence for over 90 minutes.

Mr Redmond said he was very hopeful following the meeting.

He also said Pope Francis spoke strongly against those guilty of corruption and cover-up in the church.

Mr Redmond said the Pope referred to them as "caca", or "filth in the toilet".

"The Pope was genuinely shocked to hear about the 6,000 babies who died and the 3,000 banished babies and the vaccine trials and lifted his hands to his head in shock."

Mr Redmond, who was born in Castlepollard Mother and Baby Home and adopted at 17 days, asked the Pope to publicly call upon the orders of nuns who ran the homes to immediately accept their responsibilities.

He said the Pope apologised for what happened in the homes.

"I’m very hopeful that after all the years of talk from the church that Pope Francis might actually do something to really shift things forward," he said.

He added: "A lot of the survivors there spoke very forcefully and made a lot of demands for action.

"We’re hopeful that he will challenge what he referred to as the ‘high church’ or an 'elite' within the church, who are guilty of corruption and the cover-up of abuse.

"He talked about rooting out corruption."

Mr Redmond said that the Pontiff would address the issues they raised during his mass in the Phoenix Park tomorrow.

He said survivors called for the Pope to order the nuns who ran the Mother and Baby homes to apologise and pay redress, and he said he was hopeful that would happen.

Mr Redmond said that that was a key issue which was "long, long overdue".

He added that all the survivors involved in the meeting took turns in speaking to the Pope individually.

The Pope put his hands up to his head several times as he was so shocked at what he was hearing, Mr Redmond said.

Also there was leading campaigner Marie Collins, as well as Clodagh Malone.

Ms Malone said it was a "very powerful meeting" and described it as "fantastic". 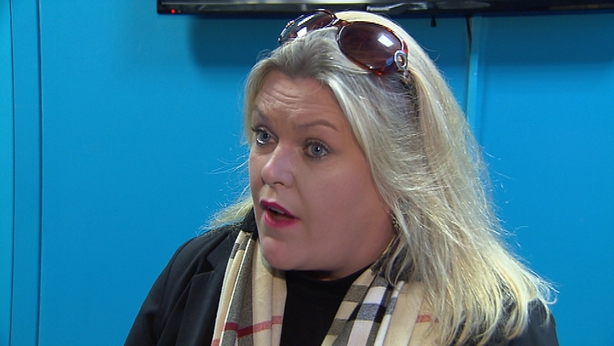 "He listened with a genuine interest. And he asked many questions about Mother and Baby homes."

She said there was an apology from the Pope and a recognition of the hurt and suffering of the survivors.

Ms Malone was born in St Patrick's Mother and Baby home in Dublin and adopted at 10 weeks old. She asked the Pope to clearly and publicly state that the natural mothers who lost their babies to adoption had done nothing wrong.

She said the Pope agreed to say more at tomorrow's mass in the Phoenix Park.

Earlier, the Pope spoke of his "pain and shame" at the failure of church authorities to tackle the "grave scandal" of clerical abuse in Ireland.

Speaking at Dublin Castle on the first day of his historic Irish visit, the Pontiff said people had a right to be outraged at the response of senior figures in the Catholic church to the "repellent crimes" inflicted on young people.

Pope Francis arrived at Dublin Airport on an Alitalia flight from Rome this morning, before travelling to Áras an Uachtaráin, and on to Dublin Castle.

The Pope's remarks came after a private ten-minute meeting with Taoiseach Leo Varadkar at Dublin Castle, who urged Pope Francis to "listen to the victims".

With the reverberations of a litany of church sex abuse scandals casting a shadow over the first papal visit to Ireland in almost 40 years, Pope Francis confronted the issue in his address inside the castle's St Patrick's Hall.

"With regard to the most vulnerable, I cannot fail to acknowledge the grave scandal caused in Ireland by the abuse of young people by members of the church charged with responsibility for their protection and education," he said.

"The failure of ecclesiastical authorities - bishops, religious superiors, priests and others - adequately to address these repellent crimes has rightly given rise to outrage and remains a source of pain and shame for the Catholic community.

He said the Catholic church in Ireland had played a role in child welfare that could not be obscured.

"It is my hope that the gravity of the abuse scandals, which have cast light on the failings of many, will serve to emphasise the importance of the protection of minors and vulnerable adults on the part of society as a whole," he said.

"In this regard, all of us are aware of how urgent it is to provide our young people with wise guidance and sound values on their journey to maturity."

The Pope said he also wished to acknowledge women who in the past had "endured particularly difficult circumstances".

On Northern Ireland, he praised those who helped forge the historic Good Friday Agreement in 1998.

He also expressed hope that remaining obstacles to reconciliation in Northern Ireland could be overcome.

Pope Francis described the letter as a "frank and decisive intervention".

He also referred to his letter to the People of God published following the Pennsylvania revelations. However, the Pope did not explicitly spell out any new initiatives. 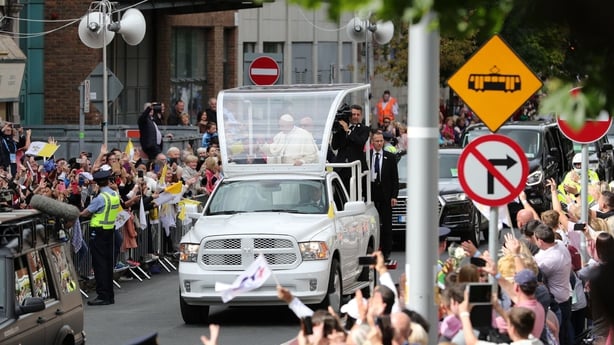 This afternoon, Pope Francis said a silent prayer at the Candle of Innocence in St Mary's Pro Cathedral in Dublin city centre.

The candle has been burning permanently since 2011 in the Pro Cathedral to remember the survivors of clerical and institutional abuse.

After departing from the cathedral, Pope Francis was greeted by thousands of people who assembled in Dublin city centre along the route that his popemobile travelled to the Capuchin Day Centre.

The Pope met with Brother Kevin Crowley at the centre, which offers outreach services to the homeless of Dublin.

The Capuchin Day Centre is "a family of the poor and marginalised in our society" pic.twitter.com/0F2VY2omYR

The Pope praised the work of the centre.

"The church has real need of this witness, so thank you," he said.

This evening, the Pope will give a speech at the Festival of Families event in Croke Park.

Among those performing at the concert are Andrea Bocelli, Daniel O'Donnell and Nathan Carter as well as choirs and community groups from around the country.

Earlier today, Mr Varadkar said the past treatment of many women and young people by church and state had left a history of "sorrow and shame".

"In place of Christian charity, forgiveness and compassion, far too often there was judgement, severity and cruelty, in particular towards women and children and those on the margins," he said.

"Magdalene Laundries, Mother and Baby Homes, industrial schools, illegal adoptions and clerical child abuse are stains on our State, our society and also the Catholic church.

"Wounds are still open and there is much to be done to bring about justice and truth and healing for victims and survivors."

Mr Varadkar appealed to the Pope to use his "office and influence" to ensure abuse survivors receive "justice and truth healing".

During his speech, Mr Varadkar also said he hoped Pope Francis' visit marked a "new chapter" in Ireland's relationship with the Catholic church.

Some prominent Irish critics of church teaching on social issues were present as the Pope addressed the specially invited audience.

Former President Mary McAleese, an opponent of the Catholic church's stance on LGBT issues, was among those in the audience, along with abuse survivors Colm O'Gorman and Marie Collins.

Mr O'Gorman called the Pope's remarks a staggering effort at deflection that failed to acknowledge the Vatican's role in covering up the crimes.

"It was quite shocking actually in some ways," he said.

President tells Pope of anger felt by those who were abused 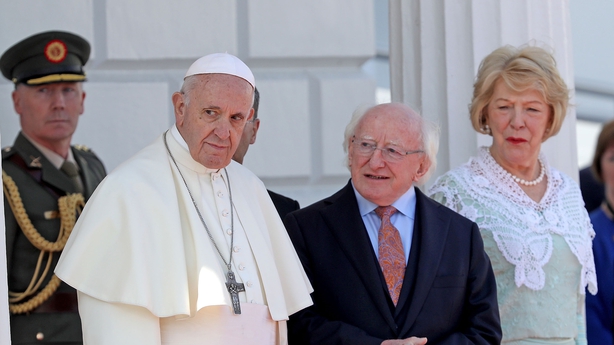 This morning, President Michael D Higgins told Pope Francis of the anger felt by those in Ireland who were abused as children by Catholic clerics.

The conversation came during a visit by the Pontiff to Áras an Uachtaráin.

A spokesman for Mr Higgins said that during the meeting, the President raised with the Pope the "immense suffering and hurt caused by child sex abuse perpetrated by some within the Catholic church".

In a statement issued after the meeting, the spokesman said Mr Higgins also told Pope Francis of the "anger which had been conveyed to him at what was perceived to be the impunity enjoyed by those who had the responsibility of bringing such abuses for action by the appropriate authorities and have not done so".

The two men also agreed on the importance of protecting vulnerable communities and individuals, and discussed issues including homelessness, health, education and nutrition.

Pope to fly to Knock Shrine ahead of Phoenix Park mass

Tomorrow, the Pope will fly to Knock Shrine, ahead of a mass in the Phoenix Park.

The Papal mass tomorrow, which is the centre-piece of the World Meeting of Families (WMOF), will draw a crowd of half a million people to the Phoenix Park.

A number of park-and-ride hubs have been set up to facilitate the crowds as many roads will be closed in Dublin city centre tomorrow.

Gardaí are urging the public to use public transport to attend events in Dublin and Knock. 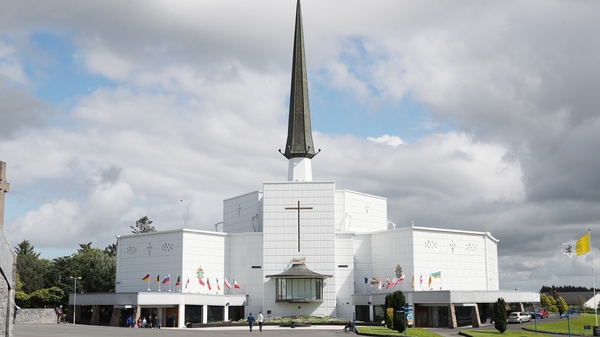 Pope to visit Knock ahead of Phoenix Park mass