Ireland's women's hockey team was given a hero's welcome in Dublin city centre after winning a silver medal at the Hockey World Cup.

Thousands of supporters lined Dame Street with flags and banners to welcome the squad and their support team to a celebration hosted by Dublin's Lord Mayor Nial Ring.

Speaking at the event, Mr Ring said it was a historic occasion for the nation.

He said: "We have a great tradition of sport in Ireland and these underdogs had the skill and the determination.

"These girls have proven we are the best. Thank you for making us so proud to be Irish."

The team won silver at the tournament following their 6-0 defeat to eight-time World Champions The Netherlands in London yesterday. 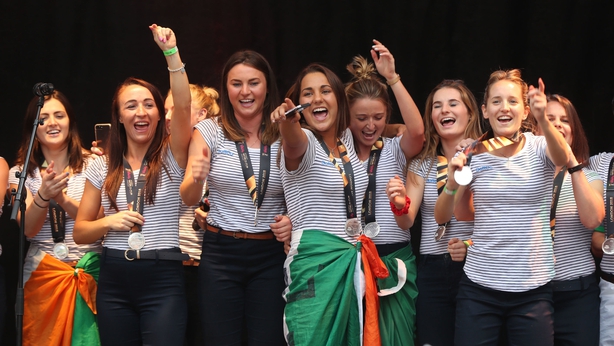 The team, who lined up on stage with their silver medals and draped in the national flag, were thanked by their coach Graham Shaw who said they had no idea how much support had grown across Ireland.

He said: "Yesterday was a testament to the character of the team and the people that they are, to show the bottle that they did. We had no idea how many people were watching at home.

"We're very grateful to all the supporters and non-hockey supporters that turned out for us."

Earlier, Minister for Sport Shane Ross announced an additional €1.5 million in funding for Olympic and World Champion preparation this year, with a significant amount going to women's hockey.

The minister made the announcement as he welcomed Team Ireland at Dublin Airport this afternoon. 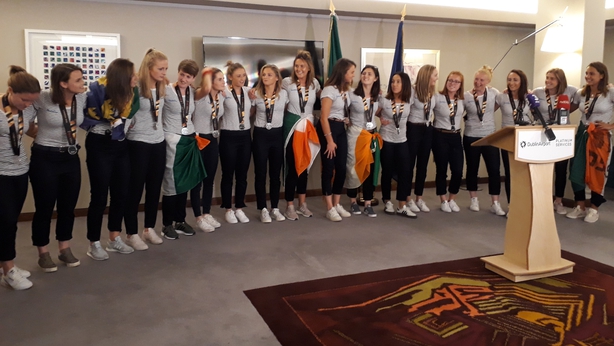 He said it was the immediate reaction to the team's "exceptional" and "momentous" performance.

Mr Ross said that while technically the team was defeated yesterday, it was a great victory for the Irish and he praised the players "one of the top Irish sporting achievements of all time".

He said it must be remembered that it was an amateur team that took on professionals.

Team members shed tears in response to the news of the extra funding, and said it would change women's hockey and give them hope of reaching the Olympics.

Despite the defeat yesterday, Ireland are expected to climb up to 10th in the world rankings for the first time.