Taoiseach Leo Varadkar has said that Facebook CEO Mark Zuckerberg confirmed to him an expansion of several hundred jobs at the company's base in Ireland.

Mr Varadkar met Mr Zuckerberg in Silicon Valley as part of his trade mission to the west coast of the United States.

The jobs will be created across a number of teams next year, according to Facebook.

Ireland has the largest Facebook office outside of California. 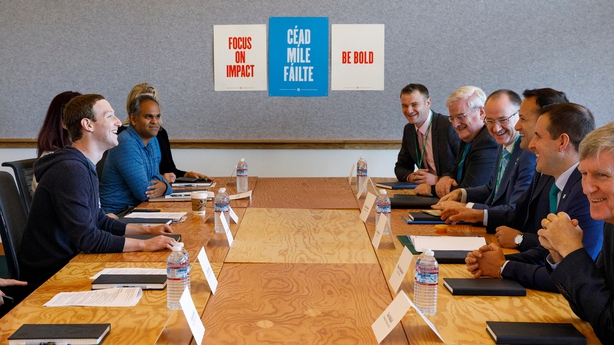 Mr Varadkar said the issue over the €13 billion owed by Apple following the European Commission decision would be raised when he met Apple CEO Tim Cook.

He said Ireland did not anticipate being fined by the European Commission in relation to the recoup, however he said it was the view of Government that an escrow account needed to be established.

An escrow account is a temporary "pass-through" account, generally held by third parties during a business transaction.

Speaking to reporters, the Taoiseach said the escrow account should be set up "as soon as possible".

He said he could not give an exact timeline, but the intention was to establish it and have the Apple money paid.

However, Mr Varadkar said nothing can be done with the money as other countries may have a claim on it and he added that the whole issue had to be heard and decided upon at the European Court of Justice.

"So, it will be many years before we know where that money goes," he said.

Last month, the Commission said it was taking Ireland to the ECJ over the failure to recover that money.

After the meeting, the Taoiseach's spokesperson said he raised the company's plans to develop a major data centre in Athenry and "impressed upon Mr Cook the value and importance that the Irish Government attaches to the Athenry project".

He also said that there was very strong support in the local community for the project.

Mr Varadkar acknowledged that the planning delays that have affected the project to date due to litigation were beyond Apple's control and he outlined the changes that the Government is making to fast-track these developments in the future, including specifically designating data centres as strategic infrastructure.

Apple agreed to continue to consider Athenry in the context of its future business plans. 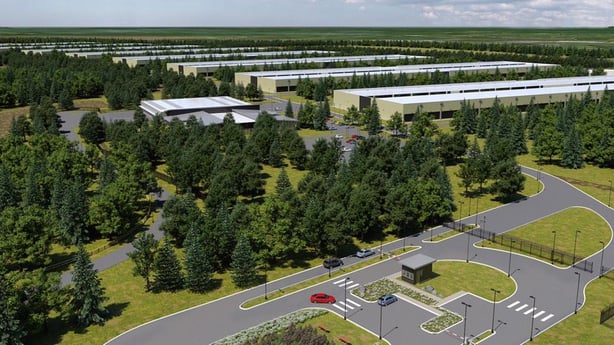 The Taoiseach then travelled to San Francisco, where he was given the key of the city in an event at City Hall.

In a speech to a gathering of Irish community representatives, Mr Varadkar said Ireland had been a bridge to Europe for great US companies for more than 70 years and it was the Irish that arrived in San Francisco 170 years ago that laid the foundation for the relationship between Ireland and the US.

He said he could not help but feel a sense of pride for the contributions being made by the Irish and Irish-Americans to the San Francisco Bay area.

Mr Varadkar also said he did not think US proposals to reduce corporation tax would have much impact on Ireland.

Mr Varadkar said that Ireland believed that individual countries should set their own tax rates so it would not "make sense" to criticise.

He said Ireland's tax rate had been constant for decades and had withstood changes of government, recessions and periods of economic expansion.

He said a different US President might put it up again and he pointed out that the same thing applies in Britain.

Yesterday, Mr Varadkar was in Seattle, where he highlighted the economic contribution that companies such as Amazon and Microsoft, which both originated in the city, have made to Ireland.