The European Commission said it was taking Ireland to the European Court of Justice for its failure to recover up to €13 billion of tax due from Apple.

Taoiseach Leo Varadkar has described the commission's decision as "wholly unnecessary and unwarranted at this time", while the Department of Finance said it was "disappointing" and "extremely regrettable".

The commission ordered the US tech giant in August 2016 to pay the unpaid taxes as it ruled the firm had received illegal state aid.

The case was one of a number of deals the EU has targeted between multinationals and usually smaller EU states.

During Taoiseach's Questions in the Dáil, Mr Varadkar said the Government profoundly disagreed with the European Commission's interpretation of state aid rules.

"It is our view that tax is a national competence, it's a matter for this parliament, not a European matter," Mr Varadkar said, adding that the case was already under appeal.

Mr Varadkar said that in the meantime, they were making arrangements to collect the €13bn from Apple.

"The NTMA is managing this process. They have tendered for fund managers to set up an Escrow account and someone to manage the money until the European Court of Justice decides who it belongs to," Mr Varadkar said.

Minister for Finance Paschal Donohoe said that he disagrees with the European Commission's assessment and decision. He also rejected that the work of the Irish Government was "tardy".

Speaking on RTÉ Six One News, the minister said the action is unwarranted and unjustified, saying that the Irish Government would continue its work in concluding the transaction.

He also said the believes that the process will be complete soon.

Minister for Finance says the EU's court move over the Apple tax bill is 'not justified on the basis of the progress that we have made' pic.twitter.com/2AHZwPj9L8

EU Competition Commissioner Margrethe Vestager earlier said: "More than one year after the commission adopted this decision, Ireland has still not recovered the money."

Know it may be difficult, but more that 1 year after Apple decision, tax benefits not recovered by Ireland. We ask EU court to look into it.

The commissioner added that Dublin had not even sought a portion of the sum.

"We of course understand that recovery in certain cases may be more complex than in others, and we are always ready to assist. But member states need to make sufficient progress to restore competition," she added.

The commission said the deadline for Ireland to implement its decision had been 3 January this year and that, until the aid was recovered, the company continued to benefit from an illegal advantage.

Apple is appealing the case.

Ms Vestager, who was also announcing a demand for Amazon to pay about €250m in taxes to Luxembourg, declined to comment on possible penalties on Ireland if it were not to comply with an eventual ECJ ruling against it. 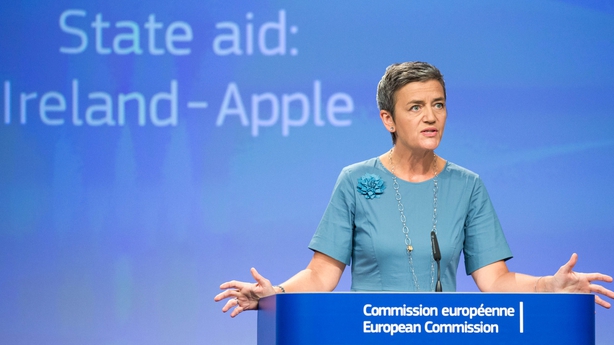 She told a news conference today that in other cases of illegal tax advantages, such as Fiat in Luxembourg, Starbucks in the Netherlands and a Belgian scheme for 35 companies, the money was recovered even before appeals were exhausted.

However, the amounts involved were far smaller.

The commission said that Ireland had made progress on calculating the exact amount due, but was only planning to conclude the work by March 2018 at the earliest.

Ireland, like the Benelux countries, faces criticism from bigger EU states that they are siphoning off tax revenues and the bloc's governments are negotiating reform.

In a statement, the Department of Finance said: "Ireland has never accepted the commission's analysis in the Apple state aid decision.

"However, we have always been clear that the Government is fully committed to ensuring that recovery of the alleged Apple state aid takes place without delay and has committed significant resources to ensuring this is achieved," the department said.

"Ireland fully respects the rule of law in the European Union," it stated.

"That is why it is extremely disappointing that the commission has taken action at this time against Ireland.

"Irish officials and experts have been engaged in intensive work to ensure that the State complies with all its recovery obligations as soon as possible, and have been in constant contact with the European Commission and Apple on all aspects of this process for over a year.

"It is extremely regrettable that the commission has taken this action, especially in relation to a case with such a large scale recovery amount.

The Department of Finance said that Ireland has made significant progress on this complex issue and is close to the establishment of an escrow fund, in compliance with all relevant Irish constitutional and European Union law.

"The work on the establishment of the escrow fund to deal with the unprecedented recovery amount will continue, notwithstanding the fact that commission has taken this wholly unnecessary step," it added.

"I think it's extremely regrettable", he said.

"We have been dealing with the Apple judgment and in fact are quite advanced and very close to complying with the requirement to collect and place in an escrow account the €12 billion, and for that reason, I think today's ruling is particularly vindictive."

The leader of the Labour Party Brendan Howlin has said he was surprised and disappointed that the Government has not collected the €13 billion owed to it by Apple and put it into an escrow account.

He said the Government had to comply with the ruling by the European Commission.