Avoiding check points or any other physical infrastructure on the Irish border is the UK government's number one priority when negotiating post-Brexit arrangements for its only land frontier with the EU, a UK position paper states.

The document outlining the Department for Exiting the European Union's aims in talks with Brussels also suggests there may be no customs implications at all on the Irish border if the UK and EU can strike an ambitious future partnership.

The paper again dismisses any suggestion a customs border could be shifted to the Irish Sea, with checks and tariffs only in operation at entry and exit points between the island of Ireland and Britain.

Creating such a barrier between Northern Ireland and the rest of the UK was "not constitutionally or economically viable", it states.

Minister for Foreign Affairs Simon Coveney has said there are still significant unanswered questions about the nature of the border after the UK has left the EU.

But he said the position papers put forward by the UK government were significant steps forward.

Northern Ireland Secretary James Brokenshire said the unique situation on the island of Ireland has been reflected in the paper.

He said the document set out two main proposals - for customs arrangements and arrangements for the regulation of agri-food products.

He added that Common Travel Area has existed since the 1920s and there is broad consensus that this should be maintained.

'All dimensions' of Good Friday Agreement must be protected

Earlier, a UK government source said: "Both sides need to show flexibility and imagination when it comes to the border issue in Northern Ireland and that is exactly what our latest position paper will do.

"As Michel Barnier (EU chief negotiator) himself has said, the solution cannot be based on a precedent so we're looking forward to seeing the EU's position paper on Ireland.

"But it's right that as we shape the unprecedented model, we have some very clear principles.

"Top of our list is to agree upfront no physical border infrastructure - that would mean a return to the border posts of the past and is completely unacceptable to the UK."

The document setting out the UK government's negotiating principles for the border comes a day after the release of its position paper on the UK's long-term customs arrangement with the 27 member bloc.

It then fleshed out two potential options for a long-term deal.

The more ambitious one would see the UK aligning or mirroring its customs approach with the EU model.

In that scenario, today's position paper on the Irish border argues there would be no need for a customs border at all between the UK and Ireland.

The second proposed customs model, dubbed the "highly streamlined" approach, would see the UK negotiate agreements with the EU to reduce trade barriers and harness technology to avoid long queues at ports.

The paper also reaffirms the UK government's stated commitment to maintain the almost century-old Common Travel Area, which allows for free movement of UK and Irish citizens around the island.

It will also include a commitment to uphold the 1998 Good Friday Agreement in "all its parts".

The UK government source added: "Our paper sets out some creative options on customs and shows the priority we place on making progress on this.

"Protecting trade is vital for the UK and Ireland - in 2015 Northern Ireland sold £10.7bn of goods to Great Britain and a further £2.7bn to Ireland, while last year Great Britain exported £13.6bn worth of goods to Ireland, and imported £9.1bn - so we're prioritising finding a solution that protects businesses' ability to access these important markets."

The Government has warned that peace in Northern Ireland cannot be a bargaining chip in Brexit negotiations.

It said avoiding a return to the paramilitary violence and terrorism of the past is crucial.

"The emphasis on the priority areas identified by the Government, including the Common Travel Area, the Good Friday Agreement, north/south cooperation and avoiding a hard border, is welcome," an Government spokesman said.

"Protecting the peace process is crucial and it must not become a bargaining chip in the negotiations."

The Government said the paper from London's Department for Exiting the European Union is "timely and helpful" as it offers more clarity.

It said it would analyse the ideas on the border and customs in detail and discuss them with the European Commission and Brussels chief negotiator.

"The immediate focus for the coming rounds of negotiations remains on advancing the issues identified for phase one of the negotiations, including citizens' rights and the financial settlement, as well as issues specific to Ireland," the spokesman said.

"The Government remains hopeful that there will be sufficient progress on these issues to allow the necessary parallel discussions on the future relationship between the EU and the UK, including in relation to customs, to commence."

Sinn Féin's leader in Stormont Michelle O'Neill said the the proposals were "big on aspiration but light on clarity".

"I am not comforted, I don't believe the wider public out there will be comforted from what they read today because, whilst the British government might say they don't want to see any kind of hard border or technology put in place, it will not be within their gift to deliver that; it will be the other European member states, who clearly think and believe we need to see customs controls," she said.

Ms O'Neill claimed the UK government had only a "fleeting concern" on how Brexit could affect Northern Ireland and suggested it was using the region to gain leverage in the wider negotiations with Brussels.

"What the British Government are doing is treating us as collateral damage," she said.

Brexit will throw people of Northern Ireland 'under a bus'

Fianna Fáil's Brexit spokesperson has said the UK government's position paper is a document of contradictions because it talks about openness, yet Brexit is "all about closing things down".

Stephen Donnelly said the idea that Britain can go around the world creating better trade deals on its own, rather than as part of the EU, is "highly delusional".

He added: "We're discussing the details of something that is a profoundly bad idea. It is throwing the people of Northern Ireland under a bus, quite frankly. It is going to badly hurt the border regions."

Britain will consider replacing some EU funding for peace projects in Northern Ireland after it leaves the bloc in 2019, British Prime Minister Theresa May has said.

In an article in the Irish News newspaper, Mrs May said: "We ... want the EU funding that has helped victims of the Troubles and cross-community groups to continue at least until the current programme finishes."

"We then want to go further, and explore a potential future programme of peace funding after we leave the EU," May said. 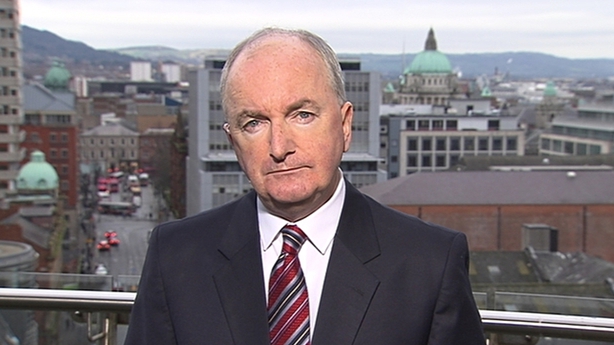 This British government document on Ireland-related issues is loaded with laudable aspirations.

But it begs the question - how much of it can be delivered?

One of the four sections deals with the Common Travel Area and associated rights in the Ireland-UK relationship.

It contains important and realistic goals.

The British government wants our citizens to retain the rights to go to, live, work, access education, health services and benefits and vote in the neighbouring jurisdiction.

It is likely the EU might allow the current situation to continue.

The aspiration to protect the Good Friday Agreement and its outworkings, including a version of the EU peace funds, is also significant.

There is a section on North-South and East West Co-operation, where the emphasis is given to protecting the island-wide market for energy.

But the meat is in the section about Avoiding a Return to A Hard Border.

One of the nine principles it lists is Avoiding Any Physical Border Infrastructure in either the UK or Ireland, for any purpose, including customs or agri-food checks.

Another principle is to prevent the creation of new barriers within the UK, including between Northern Ireland and Britain.

Unionists will cheer that line.

There is talk of allowing all small and medium-sized businesses to avoid customs checks.

The obvious question is would the EU allow such an invisible border on the island of Ireland - in effect an open door for the UK into the EU - while Britain is making its own trade deals?

The track record of Brussels bending or tearing up the rules to suit Ireland doesn't inspire optimism.