New Fine Gael leader Leo Varadkar has said his top policy priority would be getting agreement on Brexit, and also committed to holding a referendum on abortion next year, adding that he had no plans for an early election.

Mr Varadkar also warned party colleagues that it will be impossible to keep everyone happy when it comes to selection of his first cabinet.

Speaking at a press conference in the Mansion House after his election, Mr Varadkar was asked what his plans were for the formation of his cabinet, should he be elected taoiseach.

Leo Varadkar secures 60% of the Fine Gael electorate and becomes the 11th leader of the party pic.twitter.com/0JA4ACWewb

He said he had spoken to Simon Coveney and would have a further discussions with him.

"As regards other positions I have not given that detailed consideration," he said.

He said: "It's impossible to keep everyone happy, that's the nature of the business.

"It's never going to be possible to promote all the people that you would like to promote. But I will put together as good a team as I possibly can, and everyone will have a role to play."

Speaking earlier, Mr Varadkar said that if the election had shown anything "it is that prejudice has no hold in this Republic".

"Around the world people look to Ireland as a country where it doesn't matter where you come from, only where you want to go."

He said his father would never have dreamed that his son would grow up to be leader, someone judged by his actions rather than his origins and identity.

Asked at the press conference if Mr Coveney would be his tánaiste, he said "we have a Tánaiste, it's Frances Fitzgerald and I think she's doing an excellent job."

He said he would also have to have discussions with the leader of Fianna Fáil and with other members of his own party.

This leadership contest reminded me what it means to be a member of Fine Gael - Leo Varadkar pic.twitter.com/zqJ52LfNQM

Asked about his top policy priorities, he said Brexit would be his first priority as leader. He said a public sector pay deal and a new capital plan would also have to be put in place.

Addressing the future of the 'confidence and supply agreement' with Fianna Fáil, he said there was a commitment to implementing three budgets, and he was absolutely committed to honouring that agreement.

He said there could be no renegotiation of that deal.

He also said he had no plans for an early general election.

"It's not something I'm planning".

Asked about the future of the Garda Commissioner, he said that Noirín O'Sullivan retained the confidence of the Government, and he would like to see the outcome of the various investigations that are ongoing before considering a change of policy.

Addressing the fact that the majority of the party membership voted for Mr Coveney, he said there was a difference of opinions rather than a split in the party between the ordinary members and the parliamentary party.

The parliamentary party had a 65% say in the contest, the party members had a 25% share and councillors made up the remaining 10%.

Mr Coveney won two thirds of the party membership vote while Mr Varadkar took a majority of votes among the councillors and parliamentary party.

Speaking about the Independent Alliance members of Government, he said he would be happy for them to remain in their positions but he said he would like to meet with them in the coming days.

Mr Varadkar also said he expected that there would be a referendum on abortion next year.

Speaking after the results were declared, Mr Coveney said "well my children will be pleased".

He said it had been a fantastic process and experience for the party, and he hoped the party had a chance to ask what kind of country Ireland was going to become under the leadership of Mr Varadkar.

He said his message was one of unity.

"We are going to move on to build a stronger, better country."

He said it had been a competitive and sometimes sparky contest but one that also had dignity.

Mr Coveney said Mr Varadkar was a worthy winner of the contest and said he would work side by side with him to do everything he could to help the new leader.

Mr Varadkar said he had spoken to Enda Kenny today, and they agreed to speak again about whether Mr Kenny could play a role to assist the Government at some point in the future.

Mr Kenny said: "I want to extend my heartiest congratulations to Leo Varadkar on his election as leader of the Fine Gael party.

"This is a tremendous honour for him and I know he will devote his life to improving the lives of people across our country. He will have my full support in the work that lies ahead.

"I want to also thank and pay tribute to Simon Coveney for making the leadership election a real contest.

"This has been a wonderful exercise in democracy for the Fine Gael party."

We take a look at Leo Varadkar's political career in quotes as he becomes Fine Gael's 11th leader pic.twitter.com/JCunihxM3Z

Speaking on RTÉ's Six One News, Fianna Fáil leader Micheál Martin said he is looking forward to meeting with the new leader of Fine Gael, most likely in the next week.

He said the "Fine Gael angst over the leadership issue" has meant that politics has not been as productive as it could have been.

Mr Martin said his party will need reassurances from the new leader that he is committed to making Ireland a "fairer and more decent place".

He said he also needs to ensure that Mr Varadkar will hold to the 'confidence and supply agreement' in good faith.

She said afterwards that she has worked successfully on joint tourism initiatives with him in the past and looks forward to continuing their good relationship. 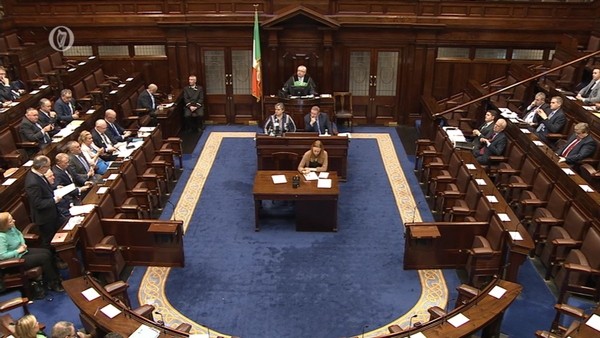