Taoiseach Enda Kenny and British Prime Minister Theresa May have held talks on the UK exit from the European Union.

He said close and friction-free trading ties between the two countries are "in our very best interests".

The Taoiseach said that he and Mrs May have agreed on the importance of maintaining the Common Travel Area.

Ireland and the UK will draw on the strength and the depth of their relationship as it faces the challenges ahead, he added.

Mr Kenny said he and Mrs May had discussed the implications of Brexit for Northern Ireland and the island as a whole; he said he had emphasised the importance of moving forward in Northern Ireland on issues such as the past and the Irish language.

The British Prime Minister said she is personally committed to strengthening the relationship with Ireland, as the UK prepares to leave the European Union.

She said there will be no return to a hard border and reaffirmed her commitment to the Good Friday Agreement.

Mrs May said she fully respects that Ireland will remain a member state of the EU.

She said both the governments want a "seamless, frictionless border" to continue to see trade and the continuation of the Common Travel Area. 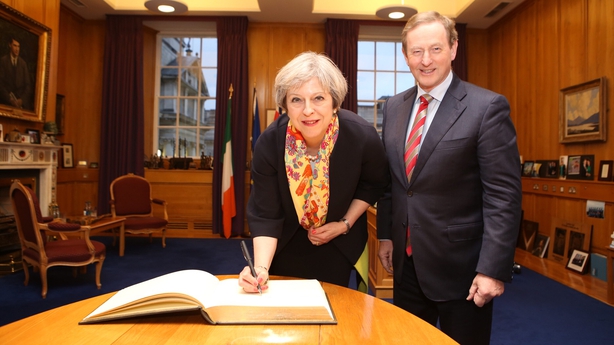 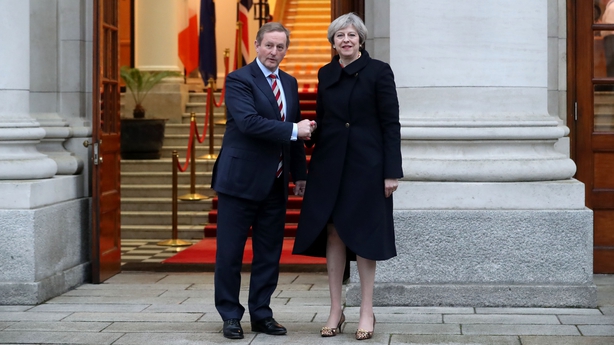 Mr Kenny also said he intends to accept his St Patrick's Day invitation to the White House so that he could meet US President Donald Trump face-to-face.

The Taoiseach said it is important not to leave the 50,000 undocumented Irish in the US without a voice.

The visit is not just about the president, but about a relationship going back 200 years, he added.

Enda Kenny says he intends to accept his invitation to the White House pic.twitter.com/oV5H5zPxJ9

Mr Kenny said he disagrees with the recent US immigration policy and has asked for a complete review of preclearance facilities in Ireland.

On UK relations with the US, Mrs May said there was a close relationship and added that the invitation to President Trump for a state visit to the UK stood.

However she said that she had a different approach to immigration than Mr Trump.

Theresa May says of Donald Trump's visit to the UK - 'the invitation stands' pic.twitter.com/QluwGzmced

Earlier, Mrs May was in Cardiff to hear the views of the devolved assemblies on Brexit including the views of Northern Ireland's outgoing first minister Arlene Foster and the new Stormont Sinn Féin leader Michelle O'Neill.

Ms O'Neill said she told Mrs May that the government at Westminster should respect the vote of the people of the North and that it should be designated special status within the EU.

She also said she would be raising the issue with the Taoiseach and with EU political leaders.

Separately, former taoiseach John Bruton said Brexit will result in economic pain which will mean increased costs for business and mitigating those costs will be important.

Speaking on RTÉ's Six One News, the former EU ambassador to the US said the big difficulties will be in the agri-food sector in terms of increases in customs costs and "massive increases in bureaucracy".

Mr Bruton said it is good that the Government has succeeded in getting the issue of the border with Northern Ireland included in the first tranche of negotiating issues, but added that he believed a designated Brexit minister is a bad idea.