British Prime Minister Theresa May has set out 12 guiding principles for the UK's negotiation to leave the European Union.

Among key objectives are a free trade agreement with the EU, the continuation of co-operation on defence, and combating crime and terrorism, and the continuance of the Common Travel Area with the Republic of Ireland.

The prime minister also said that Britain will leave the European single market when it quits the EU.

Ms May said that her plans for Brexit cannot allow continued membership of the single market, which would require free movement of people and accepting the jurisdiction of the European Court of Justice.

Instead, she said that she will seek "the greatest possible access to the single market on a reciprocal basis, through a comprehensive trade agreement".

Ms May said that she wanted to remain part of a customs agreement with the remaining 27 EU states, but said she had an "open mind" over whether this would be through associate membership of the customs union or through some other arrangement.

Her announcement came in a high-profile speech in London setting out her objectives for post-Brexit Britain.

She also revealed that the final Brexit deal reached between the UK and European Union will be put to a vote of both Houses of Parliament.

Ms May did not make clear whether a vote against the agreement would result in the UK remaining in the EU or in Britain crashing out of the 28-nation bloc without a deal.

Speaking at Lancaster House, Ms May said: "When it comes to Parliament, there is one ... way in which I would like to provide certainty.

"I can confirm today that the government will put the final deal that is agreed between the UK and the EU to a vote in both Houses of Parliament before it comes into force," she added.

Under Article 50 of the EU treaties, Britain will have two years to negotiate a deal after it informs the European Council of its intention to quit - something which Ms May has said she will do by the end of March.

Chief EU negotiator Michel Barnier has suggested that an agreement must be concluded by October 2018 to allow time for ratification before Britain leaves in March 2019, meaning that the Commons and Lords votes are likely to come during that six-month period.

Ms May also said that the preservation of the unity of the UK will be at the heart of negotiations on leaving the European Union.

The government has a plan for post-Brexit Britain which will not only secure a "good deal abroad" but also "a better deal for ordinary working people at home", Ms May added.

Speaking to RTÉ News, Ms May said she will work with the Government to ensure that customs union arrangements are as "frictionless" as possible after Brexit.

She said she had highlighted her commitment to the Common Travel Area in her speech this morning, saying it existed long before either Ireland or the UK were members of the EU.

We want to ensure free movement, she said, and wanted no return to the borders of the past.

At the end of the Article 50 negotiations, Ms May told RTÉ News, she would see what had been agreed on the customs union, but what was important was that the Irish and UK governments are committed to finding a solution that would work and be practical for people on both sides of the border.

Approach not about 'cherry-picking'

Following Ms May's speech, Brexit Secretary David Davis made a statement to MPs in the House of Commons on the government's plans, saying the UK's Brexit approach is not about cherry-picking.

In a phone call last night, Ms May spoke to Taoiseach Enda Kenny about the speech.

Separately, sterling jumped today by the most since June's Brexit referendum after Ms May promised the parliamentary vote on Britain's deal to leave the European Union.

Ms May set out 12 negotiating priorities for the upcoming EU withdrawal talks, driven by the principles of certainty and clarity and the aims to make Britain stronger, fairer and "truly global".

Ms May's speech was made to an audience including diplomats from EU states at Lancaster House.

MPs on the Commons Brexit Committee last week demanded a plan in the form of a document, such as a White Paper, to be delivered by mid-February.

"This speech could have been written by Peter Bone, delivered by Nigel Farage and will no doubt be cheered on by Jeremy Corbyn," he said. 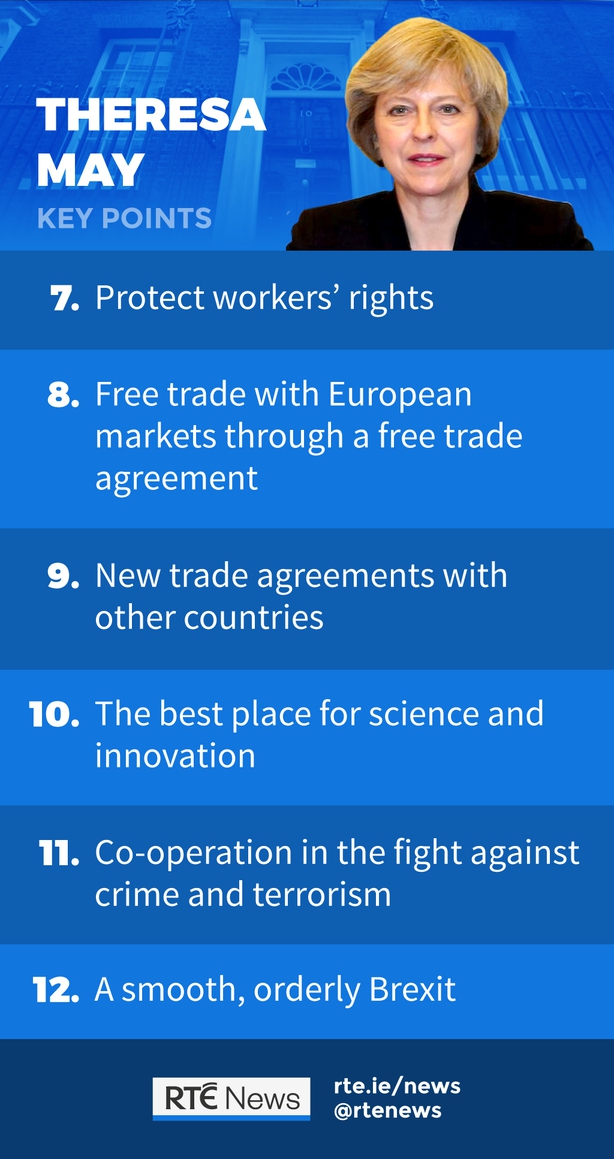 The former secretary of state for Northern Ireland has meanwhile said that she believes it would be possible to deliver a Brexit deal that would mean very little changed between the North and Ireland, including no return of a hard border.

Theresa Villiers, who served for four years as secretary of state until last year and backed the Leave side in the referendum, said this could involve the continued sharing of information between immigration officers on both sides of the border, reducing the risk of illegal immigration into the UK.

Other rules, designed to enforce rules on who is entitled to live and work in the UK, could also be used to reduce the number of people entering the UK illegally.

Speaking on RTÉ’s Morning Ireland, Ms Villiers said that leaving the EU should mean leaving the single market and the customs union, and that to stay in either would be inconsistent with the referendum result. 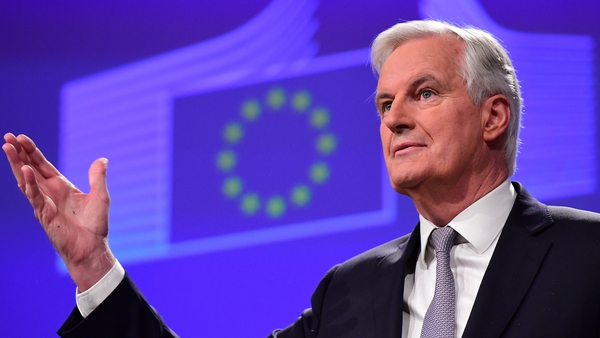 Barnier says EU ready to start talks when UK is