Assistant Garda Commissioner Michael O'Sullivan has said martial law never appeared in their contingency plans should the garda strike have gone ahead.

Taoiseach Enda Kenny also said that the Army on the streets was never part of a possible contingency. He also declined to reveal the cost of the garda deal.

Gardaí across the country are reporting for duty after industrial action, which was planned for today, was suspended following a Labour Court recommendation on pay.

Last night, the leadership of both the Association of Garda Sergeants and Inspectors and the Garda Representative Association announced they were suspending strike action.

Speaking on RTÉ's Morning Ireland, Mr O'Sullivan said: "We had a contingency plan yesterday, which we suspended at 7am this morning, in which we had a particular deployment of personnel throughout the country, and at no stage did martial law appear in the plan at all, nor was it necessary."

He said he did not want to discuss the negotiations with the various associations as the process is still ongoing, but he welcomed last night's developments.

"I simply want to reassure the public that the garda was there yesterday, there today and will be there tomorrow to protect the communities," he added.

GRA President Ciarán O'Neill this morning welcomed the new payment allowances recommended in a last-minute proposal at the Labour Court.

Speaking on the same programme, Mr O'Neill said the strike action was deferred to allow the executive to study the implications of the recommendation from the Labour Court.

The figures needed to be looked at ahead of a meeting on Monday, he said, but there was an increased offer to the one rejected previously.

Some of the increments, he said, included a straight-forward payment rather than phased payments, which was better.

The restoration of rent allowance is also a welcome improvement, he added.

Mr O’Neill said the decision "came down to the wire" and blamed the Government for delaying negotiations.

AGSI leader refuses to be drawn on proposal 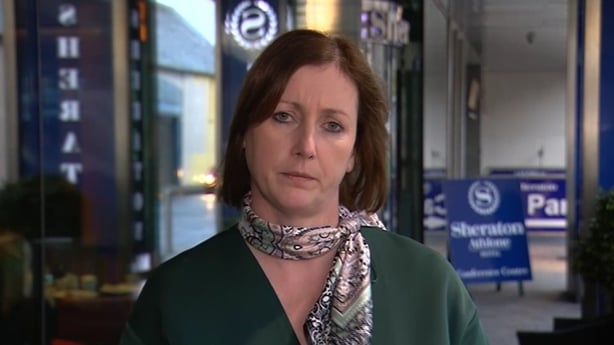 The AGSI, which represents middle-ranking gardaí, last night said it was suspending action pending the outcome of a ballot of members on the court's proposals.

AGSI President Antoinette Cunningham said there will be an income increase for all members under the proposals, although she refused to be drawn on the details.

Also speaking on Morning Ireland, Ms Cunningham said it frames a different set of proposals compared to the previous offer that was rejected.

Ms Cunningham commended the Labour Court for its intervention in this dispute and said they will be availing of it and the Workplace Relations Commission in the future.

"This was a significant part of the AGSI campaign to gain access to the industrial relations mechanisms of the State," she said.

Regarding the pay proposals she said they will be part of a discussion by the National Executive next week and a ballot will be put to their members.

"We will meet early next week, prepare the AGSI National Executive decision and move on the ballot as quickly as possible."

Close to midnight last night, the GRA also deferred its strike to consider the recommendation.

Tánaiste and Minister for Justice Frances Fitzgerald welcomed the decision to call off the action.

The Labour Court recommendation aimed at resolving the GRA row is expected to cost significantly more than the €30 million originally provided in an offer rejected by the association's executive.

Under these latest GRA proposals, the rent allowance for gardaí of around €4,000 will be increased from 1 January 2017 - because of the "evolving" rental market - by €500 per year.

The allowance, which was abolished for newer recruits some years ago, will be restored to them from the date that this recommendation is accepted.

It will be integrated into the pay of all gardaí from 1 January 2017, resulting in a boost to overtime and premium payments.

"Pre-tour briefings" - a 15-minute handover period between shifts - will be introduced from 1 January 2017 - for which gardaí will receive a payment worth around €1,459 a year.