The Garda Representative Association and the Association of Garda Sergeants and Inspectors have called-off tomorrow’s planned strike action.

The GRA, which represents 10,500 rank and file gardaí, said it was calling off the action while it considers the Labour Court recommendation.

The GRA's Central Executive Committee met for three hours to examine the recommendation.

Shortly before 11.30pm General Secretary Pat Ennis confirmed that the organisation was calling off its action.

He said the offer on the table was an improvement on previous Government proposals and full consideration had to be given to it.

He said talks would resume on Monday and a ballot of members will take place.

Mr Ennis described the last few days as long and arduous and he thanked the Labour Court for its work.

Earlier, the AGSI called off its industrial action.

In a statement, AGSI President Antoinette Cunningham said a "fundamental and historic wrong had been put right as a direct result of the Association's sustained four-year campaign to gain access to the Workplace Relations Commission and the Labour Court.

"This has always been a key part of our commitment to members and that commitment intensified in recent weeks.

"The AGSI have gained an uplift in the income of all our members, the details of which will be circulated to the National Executive and membership and will be subsequently balloted upon."

The Labour Court recommendation aimed at resolving the GRA row is expected to cost significantly more than the €30 million originally provided in an offer rejected by the association's executive.

Under these latest GRA proposals, the rent allowance for gardaí of around €4,000 will be increased from 1 January 2017 - because of the "evolving" rental market by €500 per year.

The allowance, which was abolished for newer recruits some years ago, will be restored to them from the date that this recommendation is accepted.

It will be integrated into the pay of all gardaí from 1 January 2017 - resulting in a boost to overtime and premium payments.

"Pre-tour briefings" - a 15 minute handover period between shifts - will be introduced from 1 January 2017 - for which gardaí will receive a payment worth around €1,459 a year.

The Court chaired by Kevin Foley said that it understood that the operation of the administration of justice diminished the certainty of approved annual leave for gardaí because of the requirement for them to attend court hearings even at short notice when on approved leave.

It recommended that in light of that uncertainty, gardaí should receive a €15 payment for each day of annual leave.

For example, a garda with a 30 day annual leave entitlement would receive €450 per year. This provision will kick in at the beginning of the next leave year.

The Labour Court also recommended that any outstanding issues - including the claim for a 39 hour week - should be addressed through further engagement with the WRC, with the possibility of finalising matters with the assistance of the court by no later than 30 June 2017.

The Court declined to make any recommendation on pay restoration in light of the role of the Public Service Pay Commission and an ongoing review of industrial relations due to be completed by mid-December.

Mr Foley notes that upon completion of any agreement based on this recommendation, the GRA will become a party to the Lansdowne Road Agreement.

He says the proposals represent a "full and fair means of resolution of the  current dispute".

He goes on to state that the Court is further satisfied that the recommendation addresses comprehensively the positions/claims of the parties as contained in their submissions.

He also says that he expects the parties to evaluate constructively the continuing requirement for initiating industrial action of any form in the interim before they complete the decision making process including ballots.

Tánaiste and Minister for Justice Frances Fitzgerald has welcomed the suspension of the ASGI's and GRA's strike action.

Garda Commissioner Nóirín O'Sullivan had moved to reassure the public that if the strikes were to go ahead, there was going to be a policing service in place. 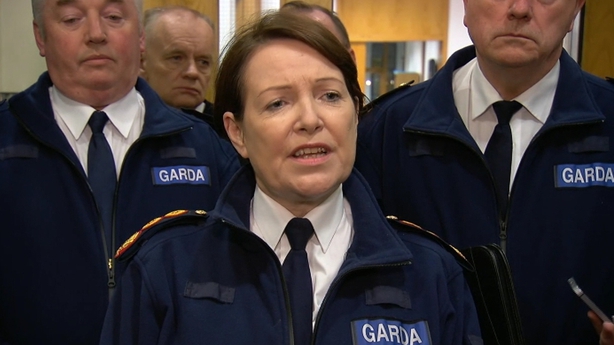 Speaking at the National Contingency Co-Ordination Centre, she said it was "a very serious situation" and "unprecedented" and there was no replacement for a policing service of over 12,000 people.

Earlier, when asked if there was hope for tomorrow's planned garda strike to be called off, GRA President Ciaran O'Neill said that was a matter for the committee and every individual member of the force would have to make their own decision.

The GRA had asked 18 units, including organised crime and immigration, not to join their garda colleagues in the planned strike action.

In Belfast, Taoiseach Enda Kenny appealed to gardaí to call off their threatened action.

He said the AGSI and the GRA now have access to the highest arbitration court in the land.

It would be wrong, he said, to continue with industrial action when there was a ballot pending on a recommendation from that court.

He said he strongly supported the Minister for Justice's call for the strike to be suspended, as the Government has given gardaí access to the Labour Court.