Pope Francis has hailed Uganda for its "outstanding" response in welcoming refugees as he began a two-day visit to the east African nation.

"Here in East Africa, Uganda has shown outstanding concern for welcoming refugees, enabling them to rebuild their lives in security and with a sense of dignity," he said, shortly after flying in to the central town of Entebbe on the second leg of his three-nation Africa tour.

Figures published by the UN refugee agency (UNHCR) show Uganda hosts over half a million people, most of whom have fled conflict and violence in neighbouring Democratic Republic of Congo and South Sudan.

"How we deal with them is a test of our humanity, our respect for human dignity and above all our solidarity with our brothers and sisters in need," the 78-year-old pontiff said.

His remarks come as Europe struggles to handle an influx of nearly 750,000 people in its worst migrant crisis since World War II which has sewn deep divisions in the continent.

Although most are refugees seeking shelter from the war in Syria, many more have fled violence and poverty in Africa to seek a better life in Europe.

"Although my visit is brief, I hope to encourage the many quiet efforts being made to care for the poor, the sick, and those in any kind of trouble. It is in these small signs that we see the true soul of a people," the Argentine pope said.

"My visit is also meant to draw attention to Africa as a whole, its promise, its hopes, its struggles and its achievements. The world looks to Africa as the continent of hope."

Earlier this morning in Kenya, the Pope met with Trócaire workers in Kangemi slum, Nairobi.

Trócaire works with St. Joseph's Parish in Kangemi that supports women and men who are living with or affected by HIV/AIDS or gender-based violence. Trócaire also supports communities in Mukuru and Kibera slums who also attended the event.

Slum dwellers represent 60% of the population of Nairobi.

"In a hard hitting message," said Trócaire's Paul Healy, "Sr Mary explained to the Holy Father how wealthy business people redefine and manipulate land usage and deprive the poor of any space or rights to land in the slums, increasing their marginalisation for selfish gains.

"In response, the Holy Father spoke of the 'dreadful injustice of urban exclusion' that is inflicted by a minority who squander resources while the poor are consigned to 'filthy peripheries'. He spoke of the solidarity of the slum dwellers and their ability 'to weave bonds of belonging and togetherness which convert overcrowding into an experience of community'," added Mr Healy. 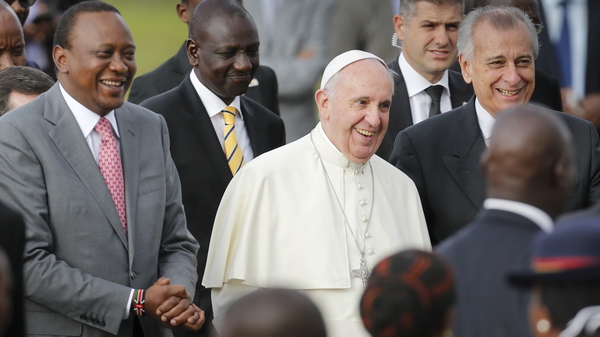 Pope Francis in Kenya at start of African tour