The case of a woman and her three children left without emergency accommodation because a credit card used by Dublin City Council’s homeless service had reached its limit has been described as an "inhumane" situation.

The Department of the Environment said the card used by the council’s Central Placement Service had reached its maximum limit due to the "significant volume of families" presenting as homeless on a daily basis.

Fianna Fáil Councillor for Fingal Jack Chambers said the woman had been in private rented accommodation until June, but had to leave because the house was sold.

He said she was unable to find any other house in the area that matched her rent allowance and had been homeless for a number of weeks.

He said the credit card used by the Dublin Regional Homeless Executive is given to people who have been approved by the CPS system and are regarded as "self-accommodation" clients, where they book hotel rooms themselves using the card.

On Wednesday, the mother and her children slept at an industrial estate in Finglas, because the credit card she had been given had maxed out.

Mr Chambers said having homeless people depend on a council credit card is an inhumane way to run the country.

Speaking on RTÉ’s Morning Ireland, he called for Minister for the Environment Alan Kelly to intervene in the situation.

He said funding for homelessness in Dublin is over-budget by €18m this year.

"To think that thousands of families and children are left at the discretion of a credit card is an inhumane way to run a country and a city that's meant to be growing.

"But what kind of society are we running if we have twice the number of homeless children and families in Dublin this year?" Mr Chambers asked.

The department said the limit on the credit card has been renewed and extended and it meets weekly with Dublin City Council to "discuss and monitor the housing and homeless situation".

The Dublin Regional Homeless Executive said it is managing an unprecedented demand for its services in the Dublin region.

It said from April to June this year local authorities placed an average of 228 people into emergency accommodation on a nightly basis.

Mr Chambers said homeless families approved for self-accommodation face being left on the streets because of credit cards reaching their limit or there is no availability in hotels.

He said Dublin City Council has written to Mr Kelly on the situation many times in the past weeks but "he has refused to say anything about this".

Anti-Austerity Alliance TD Ruth Coppinger described what happened to family on Wednesday as "obscene" and part of a regular pattern for many families who find themselves homeless because they have been given notice on their rented accommodation and are then "forced to self-accommodate".

She said: "We're seeing families dumped on the streets because of sharp rent increases or repossessions. We have over 100,000 on housing waiting lists yet no new council homes being built".

Ms Coppinger added that increasing limits on the credit cards, in what she described as an "extend and pretend" approach, is not going to solve the problem.

"There should be extra funding for emergency accommodation but the scandal here isn't that the service had run out of money - it's that the family were relying on the service in the first place," she said.

Speaking on RTÉ's Today with Keelin Shanley, he said what happened this week does not seem to be the first time that a family had been left homeless because of a maxed out card, but the bigger problem is "there is no accommodation left for homeless families".

He called for a substantial increase in rent supplements as well as emergency rent controls to "prevent landlords from increasing rents exorbitantly".

Fr McVerry said there are inadequate medium and long-term plans to address homelessness and no short term plans and the situation is beyond a crisis.

"I understand, maybe a dozen families living in cars at the moment. We are talking about families with children," he said. 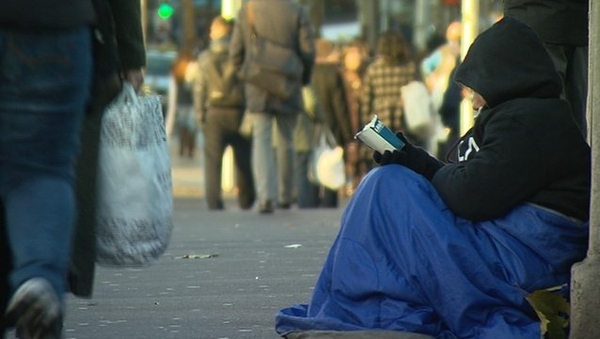