The lawyer, who represented leading republicans in court, was shot dead in front of his family at his north Belfast by loyalists believed to have been acting in collusion with British security forces.

This morning, a judicial review rejected an appeal by Mr Finucane's family for a public inquiry into the shooting, saying Mr Cameron's 2011 decision not to hold one was lawful.

Mr Cameron instead commissioned an independent investigation, whose report was published in 2012.

The 2012 report severely criticised members of the British intelligence services and army and the Northern Irish police for colluding in the killing and covering it up. 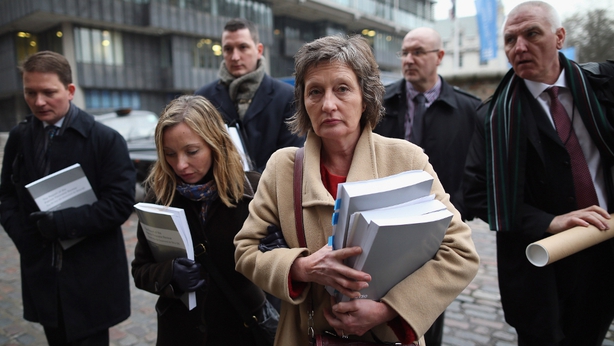 The solicitor's family has long campaigned for a full independent public inquiry, but Mr Cameron insisted such an exercise would not shed any more light on the events.

He instead commissioned a review of the case papers by QC Desmond de Silva.

It included spreading malicious propaganda that Mr Finucane was sympathetic to the IRA; one or possibly more police officers proposing him as a target to loyalists; and the mishandling of state agents inside the UDA who were involved in the murder.

While Mr de Silva found no evidence of an overarching conspiracy by the authorities to target the 38-year-old lawyer, he said the actions of a number of state employees had "furthered and facilitated" the UDA shooting while there had also been efforts to thwart the subsequent criminal investigation.

As he accepted the report's findings in the House of Commons in December 2012, Mr Cameron reiterated an apology to the Finucane family and also pledged that the government would examine the review in detail to identify potential lessons.

Mr Finucane was shot dead in front of his wife and their three children inside their north Belfast home in February 1989.

The judicial review focused on a commitment made by the UK government at Weston Park in 2001 during peace process negotiations with the Government.

The Weston Park talks resulted in Canadian judge Peter Cory being asked to examine the grounds for public inquiry in a number of controversial Troubles deaths.

The British government said such inquiries would be implemented if the judge recommended that course of action.

Judge Cory subsequently did recommend public inquiries for a number of killings, including Mr Finucane's.

But while the government ordered inquiries into the other deaths, it did not give the green light for one in the Finucane case.

Speaking following the judgment, Minister for Foreign Affairs Charlie Flanagan said: "I note this morning's judgment in the judicial review and will be studying it closely. The Irish Government's position remains unchanged.

"We continue to believe that an independent public inquiry into the murder of Pat Finucane, in line with the political commitments made by the British and Irish governments at Weston Park in 2001, should be honoured.

"This is a matter which the Government has consistently raised with the British Government. I raised it most recently with Secretary of State for Northern Ireland Theresa Villiers on 19 May, and the Taoiseach discussed the case with Prime Minister Cameron when they met in London last week.

"My thoughts at this time are with Geraldine Finucane and all the Finucane family, who have campaigned so tirelessly for more than a quarter of a century in pursuit of the full truth in the case of Pat Finucane, including the role of collusion in his murder."