Amnesty International has said that Ireland's abortion laws are putting the lives of women and girls at risk every day and has called for the legislation to be changed.

The international human rights organisation said those in need of abortions in Ireland are treated like criminals and stigmatised.

It described Ireland's abortion laws as among the most restrictive in the world.

Amnesty said the human rights of women and girls are violated on a daily basis because of a Constitution that treats them like child-bearing vessels.

It says 4,000 women a year are forced to travel outside Ireland to terminate their pregnancy and that this has a considerable mental, financial and physical cost.

In its 112-page report - She's not a Criminal: The Impact of Ireland's abortion law - Amnesty documents dozens of what it describes as "shocking" accounts of Irish women and girls who were denied abortions by Irish authorities.

The report also details the cases of a number of women who claim they were denied access to healthcare because of concerns for the well-being of their foetus.

Amnesty says that under international human rights law women have the right to an abortion in cases of rape, severe or fatal foetal impairment or a risk to their health.

It says Ireland, Andorra, San Marino and Malta are the only European countries not to allow this.

It says Irish law should be changed to allow abortion in those cases at the very least.

Amnesty also called for the law, which makes it a crime for doctors and counsellors to give women information about how to get a safe abortion, to be repealed.

The organisation today launched its 'My Body My Rights' campaign in Ireland.

It says it will see a global movement of seven million people campaign on a human rights issue in the Republic of Ireland for the first time, with petitions, demonstrations and letters targeting Irish leaders.

The Life Institute has criticised Amnesty for what it described as an "obsession" with Ireland's abortion laws, and said that Amnesty's decision to become "abortion campaigners" has damaged the founding mission of the organisation.

Spokeswoman Niamh Uí Bhriain said that most of Amnesty's high profile campaigns and public statements now seemed to be part of a push for abortion, and that this had led to members of the public withdrawing their support from Amnesty.

"Amnesty was founded to highlight human rights abuses, especially in regard to political prisoners and those suffering under unjust regimes. But now it seems to spend most of its time attacking the rights of the most vulnerable person of all - the unborn child.

"I've lost count of the number of people who have contacted us to tell us they will never support Amnesty again because of their stance on abortion," she said.

Thousands of Irish women have abortions in UK

Meanwhile, more than 3,700 women from the Republic of Ireland travelled to Britain for abortions last year, according to figures published by the Department of Health in the UK.

It found that 3,735 women who gave Irish addresses had an abortion in Britain last year, an increase on 2013, when 3,679 women travelled to the UK.

The Irish Family Planning Association said this number is an underestimation, as not all women provide their Irish addresses for reasons of confidentiality.

It said that in other cases Irish women travel to other European countries to access abortion services.

Mr Behan said the State has turned its back on these women by obliging them to rely on the health care system of the UK.

"We also need to ensure that women who travel abroad for an abortion are aware that free post-abortion medical check-ups and post-abortion counselling is available to them on their return to Ireland."

The General Secretary of Amnesty International has said Ireland has one of the world's most most restrictive laws regarding the criminalisation of women and girls who seek abortion.

Speaking on RTÉ's News At One, Salil Shetty said Irish law and practice is out of step with international practice and a clear violation of the legal obligations of this country.

He added that the time has come for the law to be changed.

Mr Shetty said Amnesty stands for international human rights standards and is not a political organisation.

"The purpose of our report is to open up this conversation; I think, it is the Irish people and the leadership have to make a call on this.

"The law and the practice is out of date; it's out of step with international practice. It is a clear violation of the legal obligation of this country.

"So, we've had the marriage equality referendum and, of course, it is not the same thing, but we believe that the time has come," he said.

Listen to a two-part series from RTÉ's Voices on abortion: Part One, Part Two 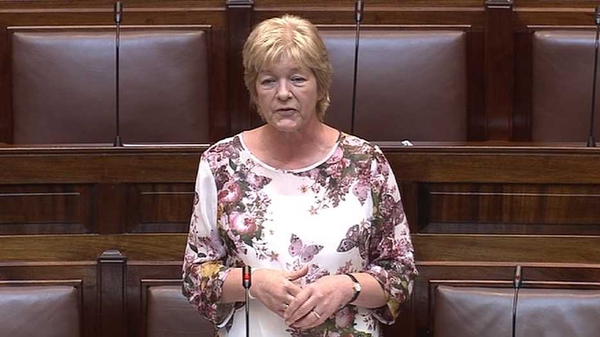