An Egyptian court sentenced Mohamed Badie, leader of the outlawed Muslim Brotherhood, and 13 other senior members of the group to death for inciting chaos and violence, and gave a life term to a US-Egyptian citizen for ties to the Brotherhood.

The men were among thousands of people detained after freely elected Islamist president Mohamed Morsi was toppled in 2013 by the military under Abdel Fattah al-Sisi, who is now president.

President Sisi describes the Brotherhood as a major security threat.

The group says it is committed to peaceful activism and had nothing to do with Islamist militant violence in Egypt since Morsi’s fall following mass protests against his rule.

Egypt's mass trials of Brotherhood members and people accused of links to the group, as well as its tough crackdown on Islamist and liberal opposition alike, have drawn international criticism of its judicial system and human rights record.

The sentences, pronounced at a televised court session today, can be appealed before Egypt's highest civilian court in a process that could take years to reach a final verdict.

US-Egyptian citizen Mohamed Soltan was sentenced to life in jail for supporting the veteran Islamist movement and transmitting false news. He is the son of Brotherhood preacher Salah Soltan, who was among those sentenced to death.

Mohamed Badie is the Brotherhood's General Guide and has already been sentenced to several death and life sentences. His deputy Khairat El-Shater was given a life sentence today. 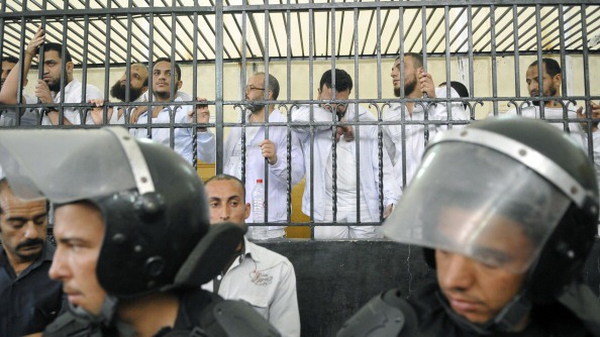