Egypt has carried out the first death sentence handed down over the violence that erupted after the army's 2013 overthrow of Islamist president Mohamed Morsi, the interior ministry said.

Hundreds of Morsi supporters have been sentenced to death after speedy mass trials, which the United Nations has described as "unprecedented in recent history".

Mahmoud Ramadan, who was hanged at 7am (0500 GMT), was the "first to be executed of those involved in violent clashes," ministry spokesman Hani Abdel Latif said.

A court in Egypt's second city Alexandria sentenced Ramadan and another Morsi supporter to death in 2014 after convicting them of throwing youths off an apartment block, killing one of them.

They were among dozens of people put on trial over deadly violence in the city's Sidi Gaber neighbourhood on 5 July 2013. 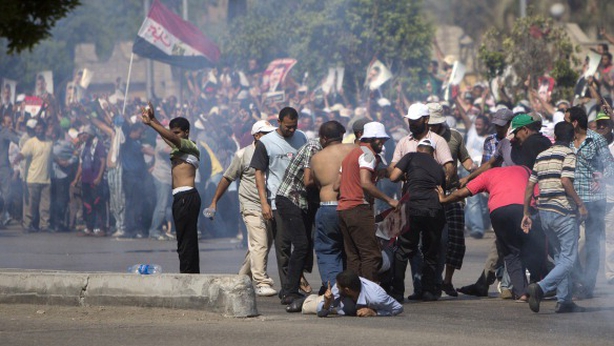 The violence erupted as supporters and opponents of the elected president held rival demonstrations across the city.

A government crackdown on Morsi's supporters left hundreds dead and thousands detained and put on trial.

Hundreds were killed in a single day on 14 August 2013, when police stormed two pro-Morsi protest camps in Cairo.

The ousted president is himself facing multiple trials on charges that carry the death penalty.

The leader of Morsi's Muslim Brotherhood movement, Mohamed Badie, has already been sentenced to death in one trial.

Many of the prosecutions have been in mass trials, which then UN human rights chief Navi Pillay described last June as "obscene and a complete travesty of justice."

The government crackdown has triggered retaliatory attacks by Islamist militants targeting security forces in Cairo and other major cities, but mostly in the Sinai Peninsula where troops are battling a raging insurgency.

Scores of policemen and soldiers have been killed in the attacks, most of them claimed by Ansar Beit al-Maqdis, the Egyptian affiliate of the Islamic State group.

Late yesterday, a bomb blast in the textile town of Mahallah, north of Cairo, killed one person and wounded 11.

The interior minister who oversaw the crackdown on Morsi's supporters, Mohamed Ibrahim, was replaced on Thursday amid mounting criticism of the failure by police to halt the attacks.