New research suggests that asteroids, and not comets, are more likely to have been the source of water on Earth.

Data gathered by the Rosetta spacecraft, which is currently orbiting comet 67P/Churyumov-Gerasimenko, found water on the comet had a considerably higher ratio of deuterium to hydrogen than the water found in Earth's oceans and in other similar comets.

Rosetta is currently circling the duck shaped comet around 500 million km from Earth.

On board it is an instrument called the ROSINA mass spectrometer which is capable of analysing the chemical fingerprint of water and gas on and around 67P.

Since Rosetta's rendez-vous with the comet in August, ROSINA has been analysing the composition of the big lump of ice and dust to try to figure out whether comets like it could have originally brought water to our planet.

Some water is made up of regular hydrogen atoms, which consist of a proton and an electron.

But in other cases, the hydrogen has been replaced by deuterium, which is a heavier isotope as it has a neutron, as well as the proton and electron.

In the case of comet 67P, the scientists led by Kathrin Altwegg from the University of Bern in Switzerland, found the deuterium-hydrogen ratio was three times that of the water here on Earth.

They also found that the levels of deuterium in 67P's water were considerably higher than that found in other similar comets, like 103P/Hartley 2 for example.

The researchers say the findings, which are published in the journal Science, undermine the hypothesis that comets provided the original reservoir for water on Earth and instead point the finger back towards the original theory - that asteroids were responsible.

Comet 67P is from the Jupiter Family of comets.

The research suggests that the ratio of deuterium to hydrogen in the water on comet 67P is much more diverse than had previously been thought.

This in turn suggests that comets within the Jupiter Family have origins from a wide variety of distances within our solar system, including the Kuiper Belt near Pluto and the Oort Cloud which is much further away. 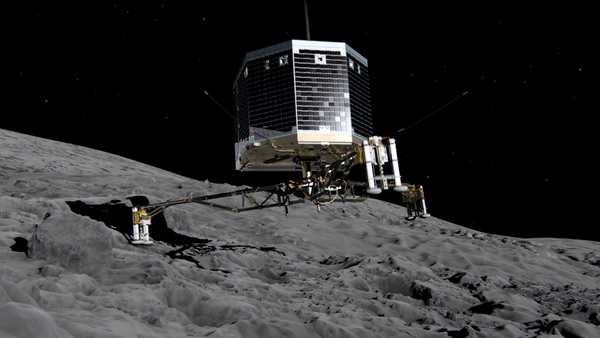 Philae 'asleep' after batteries run out