The comet probe Philae is "asleep", scientists said early this morning, after its batteries ran out and were unable to recharge as it lay in the shadow of a crater wall.

The systems on board the probe, which made scientific history this week, have shut down, the European Space Agency (ESA) said.

"Philae has fallen into 'idle mode' - a possibly long silence. In this mode, all instruments and most systems on board are shut down," the ESA said on its blog in a post entitled Our Lander's Asleep.

Contact was lost at 12.30am and the next opportunity for communication is expected to be 10am.

Stephan Ulamec, lander manager, said: "Prior to falling silent, the lander was able to transmit all science data gathered during the First Science Sequence.

"This machine performed magnificently under tough conditions, and we can be fully proud of the incredible scientific success Philae has delivered."

It took ten years for Philae and its Rosetta mothership to reach comet 67P/Churyumov-Gerasimenko after an epic journey across four billion miles of space.

Late last night scientists said they may have made a breakthrough in their attempts to rescue Philae.

A report on the spacecraft's verified Twitter feed, Philae Lander @Philae2014, suggested the craft had successfully "hopped" into a new position, possibly one that would enable more sunlight to shine on its solar panels.

Earlier yesterday scientists said they were actively considering taking a risky gamble by using the probe's landing gear to jump it away from the darkness and into the light.

There were fears that such a manoeuvre might topple the craft over and end its mission.

Scientists are still not sure of the probe's location after Wednesday's rollercoaster landing which saw the dishwasher-sized craft bounce twice before coming to rest more than half a kilometre from its original landing site.

Two harpoons which were supposed to anchor Philae to the ground failed to deploy, causing the probe to shoot a kilometre into space after its initial touchdown.

.@ESA_Rosetta I'm feeling a bit tired, did you get all my data? I might take a nap… #CometLanding

The comet is a 4-km wide rugged lump of ice and dust, more than 400 million kilometres from Earth, strewn with deep pits, craters, cliff walls and jagged outcrops.

While scientists try to save Philae, attention will also turn to Rosetta, which now has to manoeuvre from its post-separation path back into orbit.

A statement on the ESA blog said: "The hugely successful Rosetta mission will continue, as the spacecraft tracks comet 67P/C-G on its journey to the Sun.

"Rosetta is the first spacecraft to rendezvous with and orbit a comet and has already returned incredible scientific data." 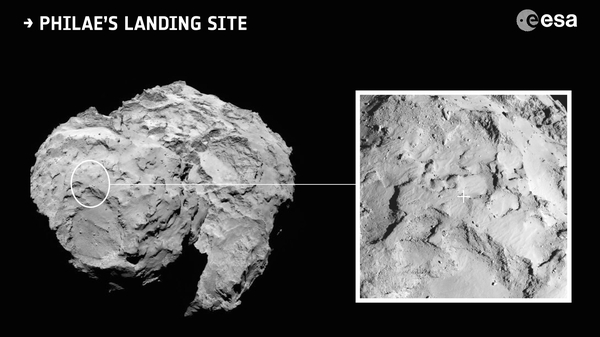