Egyptian President Abdel Fattah al-Sisi has said Egypt's authorities "will not interfere in judicial matters" a day after three Al-Jazeera journalists were jailed for between seven and ten years.

The United States is leading calls for Mr Sisi to pardon the journalists working for the Qatar-based network.

They were convicted yesterday of aiding the blacklisted Muslim Brotherhood Islamist movement and "spreading false news".

Eleven defendants tried in absentia, including one Dutch journalist and two British journalists, were given ten-year sentences.

A presidency official said that Mr Sisi cannot legally pardon the journalists until a final court ruling after an appeal.

Mr Sisi said this morning he had called the justice minister to stress that the authorities "will not interfere in judicial matters".

The verdicts sparked an international outcry, with Australia saying it was "appalled" and US Secretary of State John Kerry denouncing "a chilling and draconian sentence".

Mr Sisi this morning said in a televised speech at a military graduation ceremony: "We have to respect judicial rulings and not comment on them even if others don't understand them."

Al-Jazeera says only nine of the 20 defendants are on its staff.

Sixteen defendants in the trial are Egyptians who were accused of belonging to the Brotherhood, which the authorities designated a "terrorist organisation" in December.

Foreign defendants were alleged to have collaborated with and assisted their Egyptian co-defendants by providing media material, as well as editing and broadcasting it. 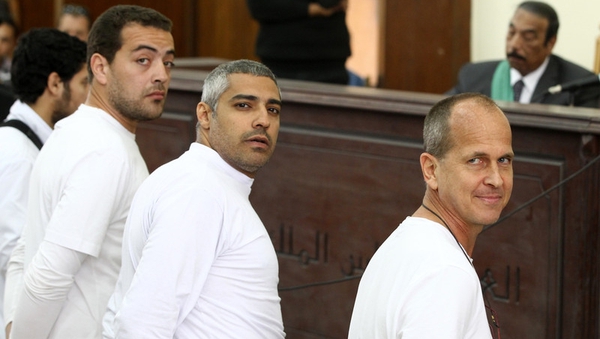 US condemns sentencing of journalists in Egypt