The White House has condemned the sentencing in Egypt of three Al Jazeera journalists to seven years in jail for aiding a "terrorist" organization.

Peter Greste, Mohammed Fahmy and Baher Mohamed are among 20 people being tried in a case that caused international outcry.

They are charged with harming Egypt's national interests by spreading false news and assisting or belonging to a terrorist organisation.

Of the 20 accused 12 are being tried in absentia.

Al-Jazeera has criticised as "unjust" the court decision.

Australian Peter Greste, Al-Jazeera's Kenya-based correspondent, and Canadian-Egyptian national Mohamed Fahmy, bureau chief of Al-Jazeera English in Egypt, were detained on 29 December at the Marriott hotel room where they were working.

Baher Mohamed, an Egyptian producer, was detained at his home a day later.

All three have been held at Egypt's notorious Tora Prison for six months.

Australia's Foreign Minister Julie Bishop said she has spoken at length to Mr Greste's parents who are considering their legal options including an appeal.

"We understand that Egypt has been through some very difficult times and there has been a great deal of turmoil in Egypt.

"But this kind of verdict does nothing to support Egypt's claim to be on a transition to democracy and the Australian government urges the new government of Egypt to reflect on what message is being sent to the world about the situation in Egypt", she said.

"Freedom and freedom of the press is fundamental to a democracy and we are deeply concerned that this verdict is part of a broader attempt to muzzle the media freedom that upholds democracies around the world", Ms Bishop added.

US Secretary of State John Kerry has described the verdict as "chilling and draconian".

UN Human Rights chief Navi Pillay has called for the release of the three reporters, criticising the Egyptian government for "crushing" the media.

The National Union of Journalists has condemned the prison sentences.

Irish Secretary Seamus Dooley said the union was calling on Tánaiste and Minister for Foreign Affairs Eamon Gilmore to make "an immediate protest against this scandalous treatment of journalists". 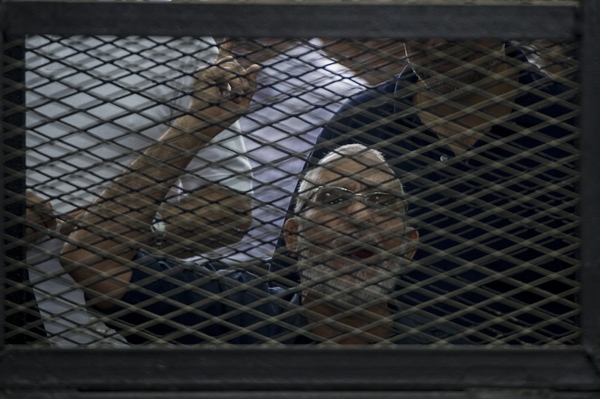