The United States and France have both offered to send security services to Nigeria to help the search efforts to recover more than 200 schoolgirls abducted by Islamist rebels.

Nigerian police have also offered a 50 million naira (€222,000) reward to anyone with information leading to the rescue of the girls.

Last month's mass kidnapping by militant group Boko Haram has triggered an international outcry and protests in Nigeria, piling pressure on the government to get the girls back.

Public anger mounted after locals yesterday said another 11 girls had been seized from the same remote northeastern area by suspected members of the group.

Boko Haram leader Abubakar Shekau has threatened in a video to sell the girls abducted on 14 April from a secondary school in the village of Chibok "on the market".

The kidnappings, and other attacks by Boko Haram, have overshadowed Nigeria's hosting of the World Economic Forum which is due to start this evening.

Elsewhere, an attack by Boko Haram in a northeastern Nigerian town on the Cameroon border has killed hundreds of people, a local senator and witnesses said.

News of the attack in Gamboru Ngala emerged hours after Islamists stormed the town on Monday, but casualty figures had remained unclear.

Area senator Ahmed Zanna told AFP that "the death toll from the attack is around 300," while residents said more than 100 bodies had been collected so far and that the toll was likely rise. 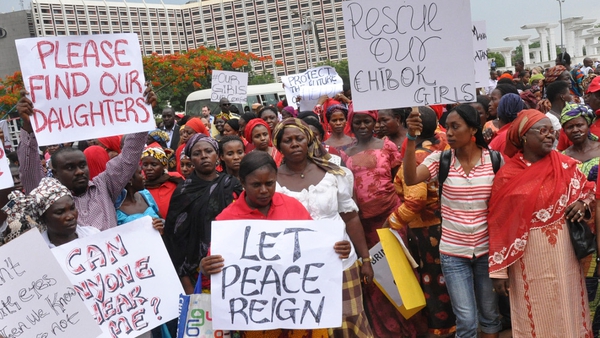 US to send team to Nigeria in response to schoolgirls' kidnapping