Nigerian President Goodluck Jonathan has welcomed a US offer to send an expert team to Nigeria to support the government's response to the kidnapping of more than 200 schoolgirls by an Islamist militant group.

US State Department spokeswoman Jen Psaki said the US embassy in Nigeria is "prepared to form a coordination cell".

This would include US military personnel and law enforcement officials with expertise in investigations and hostage negotiations.

The group Boko Haram kidnapped more than 220 schoolgirls last month and has threatened to sell them into slavery.

Suspected Boko Haram gunmen kidnapped another eight girls from a village near one of the Islamists' strongholds in northeast Nigeria overnight.

Lazarus Musa, a resident of the village of Warabe, told Reuters news agency that armed men had opened fire during the raid.

"They were many, and all of them carried guns. They came in two vehicles painted in army colour. They started shooting in our village."

A police source, who asked not to be identified, said the girls were taken away on trucks, along with looted livestock and food.

She said: "President Jonathan welcomed Secretary Kerry's offer to send a team to Nigeria to discuss how the United States can best support Nigeria in its response."

US President Barack Obama has directed that Mr Kerry and the State Department "do everything we can to help the Nigerian government find and free these young women," Ms Psaki added.

The Islamist militant group Boko Haram has claimed responsibility for taking the girls from school.

Its leader Abubakar Shekau declared his plan to sell them as slaves in a video released yesterday.

"We are offering practical help," Mr Hague told reporters as he arrived for a Council of Europe meeting in Vienna.

"What has happened here ... the actions of Boko Haram to use girls as the spoils of war, the spoils of terrorism, is disgusting. It is immoral," he said.

He said he did not want to discuss the details of what help Britain was offering.

US actress Angelina Jolie, a UN Special Envoy, has also condemned the kidnapping as "unthinkable cruelty and evil".

In a statement this evening, UNICEF described the abduction of eight more girls in Nigeria as "an outrage".

The children's agency called on the abductors to immediately return the kidnapped girls unharmed to their communities. 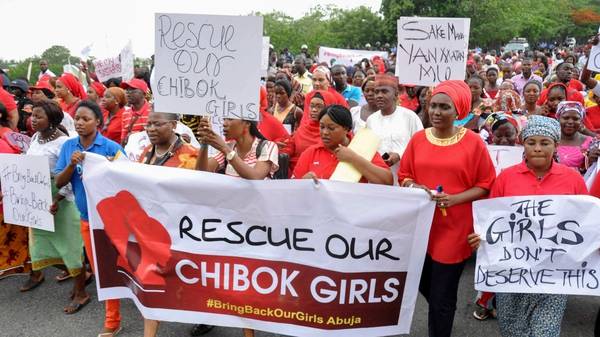