The Garda Síochána Ombudsman Commission chairman has said he believes there is a leak in GSOC.

Simon O'Brien said he did not know if it was a high-level or a low-level leak, but said only seven people had access to a secret document that was leaked to the Sunday Times and published last weekend.

He told the Oireachtas Joint Committee on Public Service Oversight and Petitions that the commission had launched an internal investigation.

Mr O'Brien also said he has no idea whether his organisation is still under surveillance.

Responding to a question from Richard Boyd Barrett, he said there could well be a potential that someone might be looking at their building, but who that person is, or who that agency is, is completely unspecific.

He said he regretted not giving information on a security sweep at his office to the Minister for Justice and said he took the strategic decision alone before Christmas.

He also said he held a two-hour meeting with the Garda Commissioner at Garda HQ yesterday to allay his concerns over the publication of a report on the bugging allegations at GSOC.

Mr O'Brien said he also told the minister of his concerns that a confidential document was in the hands of a journalist.

He said it was important to clarify that the final investigation report and the UK specialist company documentation made reference to reasons for the sweep that did not accord with his recollections.

The chairman of the commission also outlined the three security threats that prompted the sweep of its offices by a specialist firm.

Mr O'Brien said the people of this State should be horrified that one State agency would be surveilling another.

When he made the decision not to report the security sweep, he said he did so for the best reasons and he took the decision upon his own head.

He also said that if he were the Garda Commissioner he would also have been furious.

Mr O'Brien said he had already considered his position and that it was pleasing that both the Garda Commissioner and the Secretary General of the Department of Justice did not ask for his resignation.

There had been calls from garda sergeants and inspectors for him to do so.

No more than four or five people knew about the security sweep, he said, which took place late in the evening.

In response to questions from Labour Senator Susan O'Keeffe, he said you cannot have a security sweep while all the staff in the office were around.

He said he wanted to assure senators and deputies that the sweep was carried out in response to the increasing risk profile of the organisation.

There was no evidence that the Garda Síochána were surveilling his organisation, he added.

He said he could see no benign reason why the information would be put into the public domain.

Whoever leaked the document needed to be brought to justice, he said, adding that he had every confidence in the minister

In response to a question from Labour TD Derek Nolan about why the finger had been pointed at gardaí, Mr O'Brien said it was not an organisational issue and that it could have been a rogue member of the force.

However, he said he proceeded with a healthy degree of scepticism.

Copy of report given to Justice Minister

Minister for Justice Alan Shatter yesterday said there was no definitive evidence that the GSOC offices had been under technical or electronic surveillance.

Commissioner Kieran FitzGerald said on RTÉ's Prime Time last night that GSOC would not be publishing a report on the possibility of bugging at the office, which was carried out by UK security company Verrimus.

However, he said a copy of the report has been given to the minister.

Garda Commissioner Martin Callinan has asked the commission what the basis was for GSOC's suspicion of garda misconduct in the case.

Mr FitzGerald said GSOC was saying categorically that gardaí were not involved and wanted to clear that up because people were pointing the finger at them.

The three commissioners are due to appear before the Oireachtas Public Service Oversight Committee this afternoon.

Fianna Fáil's justice spokesman has said the bugging controversy has resulted in an "eroding and undermining" of the two most important pillars of justice.

Speaking on RTÉ's Morning Ireland, Niall Collins said there needs to be an independent inquiry to restore public confidence in An Garda Síochána and GSOC.

He said there needs to be answers about whether or not the offices of GSOC were bugged.

The Government should be concerned with getting to the root of the bugging allegations, he said, instead of asking why it was not informed about GSOC's concerns.

Tánaiste Eamon Gilmore has said he does not believe there should be an independent inquiry.

He said he thought that it was too soon for something like that.

Mr Gilmore said he expected that members of GSOC will answer questions as to what happened at the Oireachtas committee.

The Taoiseach has said it is important that the integrity of both gardaí and GSOC is upheld.

Enda Kenny said it is import for citizens to have trust in these entities.

On the relationship between gardaí and GSOC, Mr Kenny said there is a balance to be maintained, but relations between the two are very important.

He said both institutions are fundamentally important elements of the democracy.

"There is always a balance to be maintained and that balance is one you have to reflect on very carefully. GSOC is independent and it has a particular oversight," Mr Kenny said.

"The gardaí are the bulwark between citizens and crime and the relationship between the two is very important."

Speaking later in the Dáil, Sinn Féin leader Gerry Adams asked the Taoiseach to make it clear that GSOC did not have to report to the minister.

He said there was no provision in law that it had to report to the minister.

Mr Kenny said GSOC had already acknowledged that it should have reported to the minister.

Mr Adams said there should be an independent inquiry.

Mr Kenny also told the Dáil he has asked the Department of Justice for a report on a transcript of a conversation between the garda confidential recipient and garda whistleblower Sgt Maurice McCabe.

He was responding to a question from Fianná Fail leader Micheál Martin during Leaders' Questions.

The Taoiseach said he had also asked the department for comments from the person concerned.

He said there was no basis for implying that Minister Shatter had had a conversation with the confidential recipient.

Mr Martin quoted from the transcript, which alleged the recipient told Sgt McCabe that the minister would come after him if his complaints became public.

The Taoiseach said it was a matter of public interest and he was concerned about it. 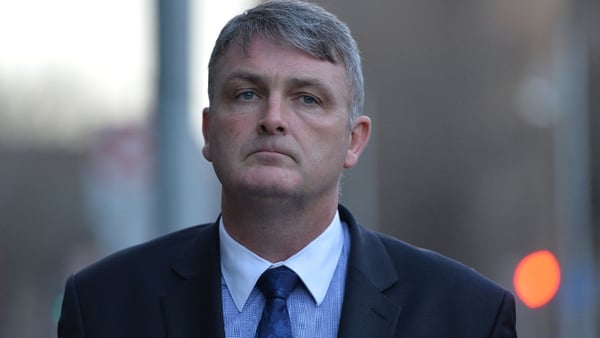