Garda Síochána Ombudsman Commissioner Kieran Fitzgerald has said suggestions of security breaches at its offices can not be definitively ruled out.

Mr Fitzgerald said there was no evidence to confirm surveillance took place, however not all suspicions could be dismissed for certain.

The Ombudsman Commissioner said he had no disagreement with Justice Minister Alan Shatter who said that GSOC told him there was no evidence that its offices had been under technical or electronic surveillance.

The minister told the Dáil that there is no evidence of which he is aware from his meeting with GSOC chairman Simon O'Brien of any phone call made or received being compromised.

Mr Shatter said he has requested the report received by GSOC arising out of the security checks on its offices and is awaiting its response.

He said it is unfortunate that An Garda Síochána have found themselves, during the last 48 hours, the subject of what appears to be “completely baseless innuendo.”

The minister outlined the three issues that arose during the security sweep of the GSOC office that gave rise to the allegations.

He said although there was no definitive evidence of unauthorised surveillance, he criticised GSOC for not telling his department of its concerns at the time.

Speaking on RTÉ’s Prime Time Kieran Fitzgerald said: “We were left with suggestions that could not be definitely ruled out.

“We can dismiss some of these threats, but on others we just do not know.”

Asked why GSOC had failed to inform the minister of its findings Mr Fitzgerald said: “Had we had a credible piece of evidence to suggest that any garda, rogue or official had bugged our office there was not a hope in hell that we would not bring that to minister. We had no such thing.”

He said GSOC had undertaken a number of serious investigations in 2012 and was in a state of heightened awareness about security.

He denied there was a toxic relationship with gardaí and the minister and said there was no reason for him or chairman Simon O’Brien to consider their positions.

The Garda Ombudsman said he would not be making the surveillance report public, adding the details have already been given to the minister.

Earlier a Government spokesperson said the Cabinet had full confidence in the commission and in its chairman.

Minister Shatter briefed the Cabinet earlier today on the outcome of a two-hour meeting with Mr O'Brien after suspicions of electronic bugging at the agency.

Taoiseach Enda Kenny said he hopes "confidence and clarity" will be provided by GSOC when representatives appear before the Committee on Public Oversight and Petitions on Wednesday.

Speaking during Leaders’ Questions, Mr Kenny told the Dáil that it was important that there's "clarity leading to confidence regarding the institution of the GSOC".

He pointed out that that the Government is not entitled to the report provided to GSOC by the company it chose to investigate the matter.

Mr Kenny said the Minister for Justice had requested that he be provided with the report.

He quoted the GSOC statement that "no sophisticated evidence of technical surveillance was found" in the GSOC office.

Following Mr Shatter's address to the Dáil, Fianna Fáil's justice spokesperson Niall Collins said that confidence has been undermined in the Gardaí and the Garda Ombudsman.

He added that the morale of the rank and file of the Gardaí is an issue and the dysfunctional relationship between the Garda Ombudsman and Garda Commissioner needs to be repaired to prevent further erosion of morale.

Independent Deputy Mick Wallace said that the manner in which GSOC has been treated in the last few days has been unfair.

He said that GSOC would like to be a professional organisation if they are allowed to be.

Mr Wallace said it was 18 months since he brought the penalty points issue to the Dáil and since then it has been shown that internal garda investigations are not satisfactory.

Fianna Fáil leader Micheál Martin has said there is a need for an independent inquiry to clarify the events surrounding the GSOC controversy.

Speaking on RTÉ’s Six One, Mr Martin said ideally such an inquiry should be conducted by three people who are independent of the Minister and of his Department.

Mr Martin said that there appears to be an attempt to portray the Garda Ombudsman's office as the villain and not the victim.

He said there was something disturbing about the Government's response in recent days to this matter.

Speaking on RTÉ's Morning Ireland, Sinn Féin TD Pádraig Mac Lochlainn said if GSOC believed it had been spied upon, then that was a serious matter that needed to be thoroughly investigated.

Mr Mac Lochlainn said there may be good reasons why GSOC did not bring its suspicions about spying in to the public domain, but it needed to tell the full story.

O'Brien called on to consider position

The Association of Garda Sergeants and Inspectors has called on Simon O’Brien to consider his position.

It said it was not acceptable that GSOC suspected that a crime may have taken place and did not report it to gardaí.

The AGSI also said if GSOC suspected garda involvement it should have reported that to the Minister for Justice.

AGSI General Secretary John Redmond said GSOC had cast aspersions on the good character of the force and cast a slur on his members.

He said he believes GSOC has no regard for the laws of the country and there is a huge question mark over the ability of Mr O'Brien to carry on in his position.

The Garda Representative Association has called for an independent inquiry into the matter.

General Secretary PJ Stone said he was satisfied there was no garda involvement in any alleged surveillance at the GSOC office.

But he said he was concerned about the security of data and information about gardaí being held in that office.

Tánaiste Eamon Gilmore said there needs to be calm to deal with the issue.

He said the first thing that is needed is solid information and he expects the Government will get it and discuss how to deal with it.

Eavesdropping or bugging is not acceptable of either individuals or public bodies, he said.

Minister for Public Expenditure and Reform Brendan Howlin has said he is very concerned about last night's news about anomalies at GSOC.

Speaking on his way into Government Buildings this morning, Mr Howlin said he was anxiously awaiting a full report from Minister Shatter.

He said he did not understand what the anomalies were and wants to know if there was any bugging or if material was compromised.

It said it did not report the matter to the minister because it did not wish to point fingers unnecessarily.

Garda Commissioner Martin Callinan has called for GSOC to clarify the nature and extent of suspected security breaches at its offices.

He has asked the commission to explain the basis for what he said was the suspicion of garda misconduct and the nature and extent of what was discovered in the security sweep. 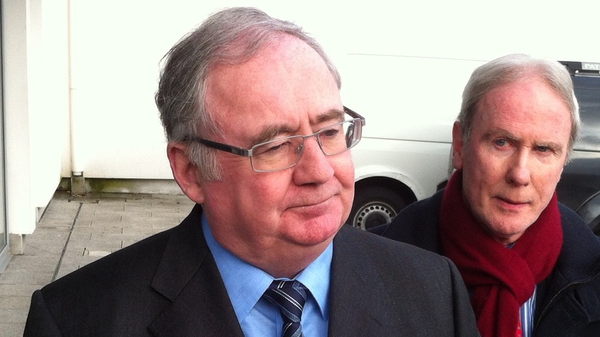