A Cairo court adjourned the trial which sees Egypt's ousted President Mohammed Mursi accused of inciting the killing of protesters.

Mr Mursi, who was deposed by the army in July following mass protests against him, remained largely silent in the hearing, which has been adjourned until Tuesday.

Four separate sets of charges have been brought against him since he was ousted, at least one of which can carry the death penalty.

Several of the 14 other defendants in the session, sitting in glass cages like Mr Mursi, turned their back on the judge, a witness said.

Mr Mursi is accused of inciting the killing of protesters outside the presidential palace during unrest in late 2012 ignited by a decree that expanded his powers.

Around a dozen people were killed.

The trial was adjourned to allow for further examination of video footage showing clashes between pro- and anti-Mursi protesters which may be linked to the case.

Mr Mursi also faces other charges including violence related to a mass jail break in 2011, plotting with foreigners to carry out a terrorist conspiracy against Egypt and insulting the judiciary.

Egypt's interim government is pursuing a fierce crackdown on the Brotherhood, which it declared a "terrorist organisation".

A court in the Suez Canal city of Ismailia sentenced 13 supporters of the brotherhood yesterday to six years in jail for illegal assembly and destruction of private and public property, judicial sources said.

In Qalyubia province north of Cairo, 32 brotherhood supporters were sentenced to two years in jail, forced labour and a fine for breaking a law making protests without prior police permission illegal, state news agency MENA reported. 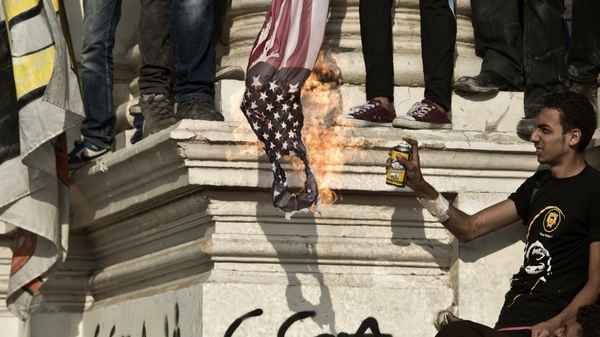