Police fired teargas in Egypt's coastal city of Alexandria to break up clashes between opponents and supporters of ousted Islamist President Mohammed Mursi.

Egypt has been thrown into turmoil by the military removal of Mr Mursi on 3 July following mass protests against his rule.

The move prompted his Muslim Brotherhood movement to organise daily demonstrations in cities across the country.

Thousands of Mr Mursi's supporters protested in the capital Cairo, the second biggest city of Alexandria and other coastal and Nile Delta towns.

Smaller clashes broke out in the Nile Delta province of Sharqia, where one person was killed and the coastal city of Damietta.

On 14 August, Egyptian security forces broke up the two main pro-Mursi sit-ins in Cairo and killed hundreds of civilians.

The army-backed government then declared a state of emergency and imposed a curfew.

Thousands of Brotherhood members, including Mr Mursi himself, have been arrested.

Around 57 people were killed in clashes between Mursi's supporters and opponents last Sunday.

While the military intervention has the support of most Egyptians, the international community, and many Islamists in Egypt, have looked on with alarm as the army and police crack down hard on Mr Mursi and his backers.

The US, an ally of Egypt that has long supported its military with cash and equipment, said on Wednesday it would withhold deliveries of tanks, fighter aircraft, helicopters and missiles to Cairo, as well as $260m in aid.

US Secretary of State John Kerry had said the US would consider resuming some of the aid "on a basis of performance" as the interim government seeks to implement a "road map" designed to lead the country to fresh elections next year.

Egypt criticised the decision, saying it found it strange at a time when the country was "facing a war against terrorism".

However, the US State Department said it would continue military support for counter terrorism and security in the Sinai Peninsula, which borders US ally Israel.

Six soldiers were wounded when a bomb exploded near army vehicles in Rafah city, northern Sinai, according to state media.

Around 150 security personnel have died in Sinai's insurgency since Mr Mursi was toppled, according to an army source. 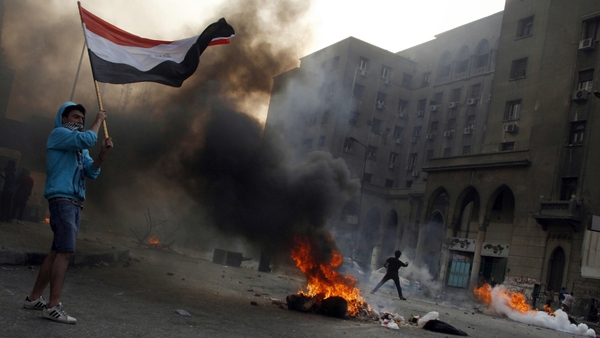 US not severing ties with Egypt - Kerry