A top Interior Ministry official has been killed in the Egyptian capital of Cairo.

It is the latest blow to a military-backed Egyptian government struggling to curb violence and suppress dissent.

General Mohamed Saeed, head of the ministry's technical office, was shot in his car outside his home by suspected Islamist gunmen.

He faces charges of kidnapping and killing policemen after a jailbreak during the 2011 uprising that ended president Hosni Mubarak's three decades of autocracy.

Army chief Field Marshal Abdel Fattah al-Sisi ousted Mr Mursi in July after mass protests against his rule and is expected to declare soon that he will run for president.

With no challenger in sight, that would effectively return Egypt to military rule.

A Sisi presidency would delight many Egyptians, but would anger the Muslim Brotherhood, which helped Mr Mursi become Egypt's first freely-elected leader.

The government has since declared it a terrorist group.

The outlawed Muslim Brotherhood denies any links to the militants now waging an increasingly potent insurgency.

It says Mr Sisi's removal of Mr Mursi was a coup that reversed the democratic gains of the anti-Mubarak revolt.

Hundreds of people have been killed in clashes between the security forces and Mr Mursi supporters since August.

The authorities have crippled the brotherhood's power to put large crowds in the streets, but now face Islamist violence that recalls the armed uprising crushed by Mr Mubarak in the 1990s.

At Mr Mursi's trial, the deposed president was held in a glass cage with a sound system controlled by the court to prevent him screaming slogans against Mr Sisi as he did in previous court sessions.

Mr Mursi insisted he was still Egypt's true president and raged at the judge, asking: "Who are you? Don't you know who I am?"

At times, Mr Mursi, in a white training suit, paced in his cage.

Other brotherhood leaders, held in a separate glass cage, waved to people in the courtroom.

The trial was adjourned to 22 February.

A list of 132 defendants published by state media indicated some were Palestinians being tried in absentia.

Egypt accuses the Palestinian Islamist group Hamas of helping brotherhood leaders escape from the jail where Mr Mursi was held in 2011.

The authorities also say Hamas, which rules Gaza, has funded Egyptian militant groups based in the nearby Sinai peninsula, which have claimed responsibility for several bomb and gun attacks in recent months. Hamas denies the accusations. 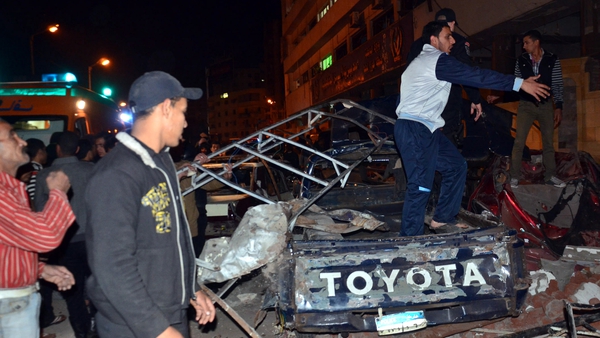 Mursi's ex-prime minister on his way to Sudan