Egyptian security forces have arrested the former prime minister of ousted Islamist President Mohamed Mursi who was sentenced to one year in jail for failing to implement a court ruling to renationalise a textile firm.

"Security forces managed to arrest Hisham Kandil, former prime minister, in carrying out a court order issued against him.

"He was caught in a mountain area with smugglers trying to flee to Sudan," Egypt's interior ministry said in a statement.

Mr Kandil was appointed in July 2012 by President Mursi after he won Egypt's first truly democratic elections that followed the fall of autocratic President Hosni Mubarak in 2011.

Mr Mursi was ousted by the army in July after protests against his rule.

The judgment against Mr Kandil was issued in April 2012, while Mr Mursi was still in office and was upheld by a higher court in September.

The case related to the sale during the Mubarak-era of a state-owned firm to a private investor.

The army-led government had launched a fierce crackdown on Mursi's Muslim Brotherhood group and its Islamist allies inwhich hundreds have been killed and thousands injured.

It has also banned the Brotherhood group, calling it "a terrorist organisation".

At least 15 people were killed and more than 100 wounded in a massive explosion at a security compound in Egypt's Nile Delta city of Mansoura in Dakahlyia province late last night.

It comes a month before a vote on a new constitution key to transition from military-backed rule.

A statement from the Brotherhood criticised the attack.

"The Muslim Brotherhood condemns in the strongest possible terms the attack on the police headquarters in Mansoura," an emailed statement from the group's London press office said.

"The Muslim Brotherhood considers this act as a direct attack on the unity of the Egyptian people and demands an enquiry forthwith so that the perpetrators of this crime may be brought to justice."

The army said the blast was caused by a car bomb.

Suicide attacks on soldiers and policemen have sharply risen in Egypt since the army ousted Mr Mursi in July amid mass unrest against his rule.

In overthrowing Mr Mursi, the army set out a political roadmap supposed to start with a mid-January vote on a new constitution and to be followed by presidential and parliamentary votes.

The state-run Middle East News Agency quoted Mr Beblawi as saying that those responsible for blast "will not escape punishment".

Witnesses said many cars inside and outside the security compound were burned out and the entire city was in chaos as people were hurrying to hospitals to check on victims.

Egypt's Nile News TV cut into its late-night programming to urge people to go to hospitals to donate blood to the victims.

Most bomb attacks since Mr Mursi's overthrow have occurred in the Sinai region, which borders Israel and Gaza. Around 200 soldiers have died in Sinai since July.

Egyptian media and many army and state officials have blamed all the violence on the Brotherhood, the state's oldest and most organised Islamist group, which has won all five elections since a 2011 uprising that ousted long-time president Hosni Mubarak.

Mr Mursi's dramatic exit triggered a wave of violence that started with police attacks on his supporters' two main camps in Cairo on 14 August in which hundreds were killed.

That violence prompted a wave of attacks on churches and police stations. Thousands of Islamist activists have been arrested in the unrest and around 100 policemen killed. 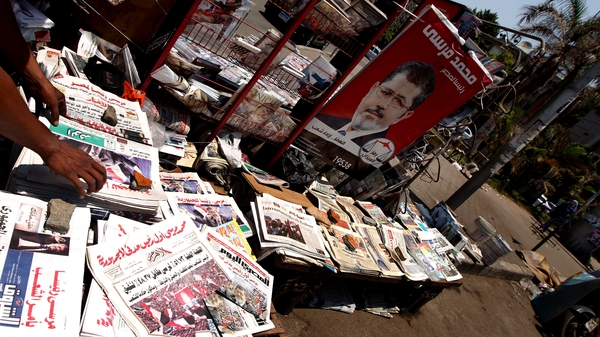