One of the three former garda sergeants questioned by the Smithwick Tribunal has rejected its findings that he had inappropriate contact with the IRA.

Former Detective Sergeant Owen Corrigan said the Tribunal findings had placed a cloud of suspicion over all former Dundalk-based gardaí.

In a statement Mr Corrigan said he welcomed the fact Judge Peter Smithwick had reached no finding of collusion against him regarding the murder of two RUC officers, Chief Supt Harry Breen and Supt Bob Buchanan.

“I do not accept, however, his finding that I had an inappropriate relationship with the Provisional IRA.

“All my dealings with PIRA were for the purpose of gathering information and/or intelligence to support the gardaí in defending the State and its people during The Troubles," Mr Corrigan said in the statement issued via his solicitors, Lawlor Partners.

Judge Smithwick had criticised Mr Corrigan's evidence at the Tribunal describing it as evasive.

However, while he ruled the former detective garda did have inappropriate dealings with the IRA, the evidence was not sufficient to draw a conclusion that he had colluded with the IRA in the murders.

In his statement today, Mr Corrigan said for 32 years he served in the border area during a time of unprecedented troubles.

"I served my force and my country to the best of my ability during a time when the campaign of violence by the Provisional IRA was at its height.

“I suffered considerable violence and intimidation with 'wanted for treason' posters of me erected by republicans in Dundalk," he said.

He also reiterated that he was severely beaten by members of the IRA although Judge Smithwick ruled that happened because of a commercial deal with PIRA after he had retired from the force.

In addition, Mr Corrigan went on to say that he did not believe any member of the gardaí colluded in the murder of the two RUC officers.

"Judge Smithwick's finding has now placed a cloud of suspicion over all former members of Dundalk Garda Station in circumstances where there is no direct evidence," he said.

Meanwhile, PSNI Chief Constable Matt Baggott has said he will be going to Dublin in the coming days to discuss the Smithwick Tribunal report with Garda Commissioner Martin Callinan, Minister for Justice Alan Shatter, and Northern Justice Minister David Ford.

He said the relationship with gardaí is excellent and had saved many lives.

Sinn Féin Justice Spokesman Pádraig MacLochlainn has said the Smithwick Report is "contradictory" in its findings.

Chief Supt Harry Breen and Supt Bob Buchanan were shot dead in an IRA ambush near the border after leaving a meeting at Dundalk Garda Station in 1989.

A tribunal of inquiry chaired by Mr Judge Peter Smithwick concluded that evidence pointed to collusion between unknown members of An Garda Síochána and the IRA in targeting the two men.

Speaking on RTÉ's Morning Ireland, Mr MacLochlainn said: "It's for anybody to look at this report. There is no direct evidence of collusion.

"Judge Smithwick made his conclusion, which he's entitled to, but it is a very contradictory report.

"What I would say is you could reach the same conclusion that the amount of times they travelled across a republican heartland could have led to the circumstances of their death," said the Donegal North-East TD.

A senior police representative in Northern Ireland says the Smithwick Tribunal's findings are stark, shocking and would be challenging to many readers.

Also on Morning Ireland, the president of the Superintendents' Association of Northern Ireland said the report was welcome as a step forward in revealing more about the murders 24 years ago.

Chief Supt Nigel Grimshaw said he did not ignore the finding that the garda and RUC at the time had ruled collusion between gardaí and the IRA in the murders.

He did not accept remarks made by Sinn Féin leader Gerry Adams that the two officers had taken a "laissez-faire attitude to their personal safety", which he said were insensitive and insulting to the families of the two men.

Chief Superintendent Grimshaw said everyone needed to be careful that the voices of the families of those who were killed were the voices that were ultimately heard.

Mr MacLochlainn defended the comments made by Mr Adams and declined to say if he should withdraw them.

He insisted that the Sinn Féin party leader was entitled to point out that in his view the findings of the report were contradictory.

He said that the "laissez-faire" phrase was used in the report and that Gerry Adams was quoting from its text.

Mr MacLochlainn also said that he believed the IRA evidence to the Tribunal to be truthfu, even though Judge Smithwick did not.

"This is a disputed report and Gerry Adams was giving an analysis of that," he argued. 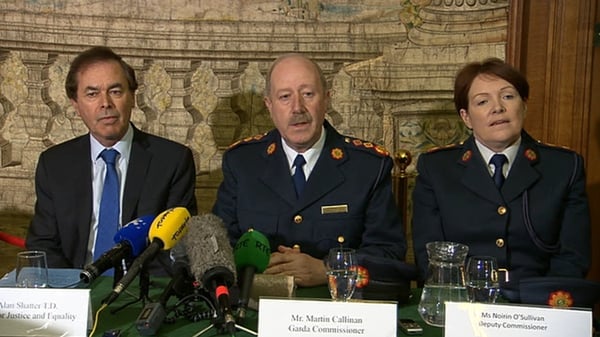