Garda Commissioner Martin Callinan has apologised unreservedly for any wrongdoing by members of An Garda Síochána highlighted in the Smithwick Tribunal report.

The report found gardaí colluded with the IRA in the murders of two RUC officers 24 years ago.

Commissioner Callinan said he accepted the report's findings but he does not accept its contention that members of the gardaí place loyalty to the force above honesty.

He said he was conscious of the work done by the gardaí in Dundalk Garda Station and stressed that he never found any evidence of IRA collusion there.

He also said he did not accept that such collusion was systemic, that he was absolutely horrified by this betrayal and that the vast majority of gardaí abhor such disloyalty to the force and the State.

He has said he is horrified that any member of An Garda Síochána colluded with the IRA.

Speaking at a press conference this afternoon, he said to think that any member of the gardaí would engage in collusion was "beyond comprehension" and it was beyond belief that someone would betray the force.

He said he accepted the conclusions arrived at by Judge Peter Smithwick.

The Smithwick Tribunal report, which was published yesterday, concluded that there was Garda collusion in the killing of two RUC officers in south Armagh in March 1989.

In his 500-page report, Mr Justice Smithwick stated that he is satisfied that there was someone within Dundalk Garda Station assisting the IRA.

But the report concluded that the Tribunal has not uncovered direct evidence of collusion.

"There is no record of a phone call, no traceable payment, no smoking gun," the report found.

Commissioner Callinan said it is a source of great disappointment that no one has been held accountable for the murders of the two RUC officers.

He said first and foremost his thoughts are with the families and the loved ones of the two murdered officers.

Speaking at the same conference, Minister for Justice Alan Shatter ruled out a further inquiry into the findings of the Smithwick Tribunal.

Meanwhile, one of the three former gardaí who was questioned by the Smithwick Tribunal has rejected the findings made against him.

A statement issued on behalf of Leo Colton by his solicitor, Dermot Lavery, said the former garda sergeant fully respected the integrity and hard work of Judge Smithwick.

However, in respect of the findings made against him by the judge that he had assisted the IRA in providing forged passport forms, Mr Colton said he rejected that "totally and utterly".

Former garda sergeant Finbarr Hickey welcomed the finding that he had no involvement in the collusion which led to the murder of the two senior RUC officers.

Mr Hickey, in a statement issued through his solicitor James MacGuill, said he was pleased the Tribunal accepted his evidence he had 'no hand act or part in any collusion.'

In particular he said he welcomed two sections of Judge Smithwick's report which stated that Mr Hickey did not pass information to the IRA, that he had no relationship with them and was not a sympathiser.

While he did sign passport forms, some of which ended up being used by the IRA, the judge found that Mr Hickey had not deliberately assisted them.

"The entire Tribunal process has been immensely stressful on my family and me with my name being repeatedly linked with the allegation under investigation," he said.

Mr Hickey went on to say that he hoped responsible journalists would give equal prominence to the Tribunal finding which absolved him of any wrongdoing.

In conclusion, the former garda sergeant appealled for privacy and thanked his family and friends for their support "throughout what has been a most trying ordeal".

PSNI Chief Constable Matt Baggott this afternoon said that he will be studying the findings of the Smithwick Tribunal in detail, but that it will not distract from the strong working relationship the PSNI has with the gardaí.

In a statement, Mr Baggott also said it is important to acknowledge the suffering the murders brought upon the Breen and Buchanan families and he expressed his sincere sympathy to them at this difficult time.

He is to discuss the findings of the Tribunal with the Garda Commissioner and justice ministers David Ford and Alan Shatter in the coming weeks.

Mr Baggott also said the PSNI and gardai have well-established protocols and excellent cross-border cooperation and remain resolute in their determination to build on "solid foundations and commitment to jointly combat crime and to protect all our citizens".

Speaking in Japan, Mr Kenny said it is a revelation of another dark patch in Ireland's recent history.

He added that he endorsed the Minister for Justice's apology to the victims' families.

The Taoiseach said he expected Mr Shatter to write to the families and he added that he will meet them if appropriate in due course.

Sinn Féin leader Gerry Adams said the two officers had a "laissez faire" attitude to their own security.

Speaking on Newstalk, Mr Adams said the men "seemed to think that they were immune from attack by the IRA and tragically as it turned out for them that wasn't the case".

He said: "When you have that type of failure to protect the RUC operatives in the middle of a war, then what happened happens."

"I’m sure the same thing has happened with IRA volunteers who were killed that it wasn’t necessarily intelligence or inside information it was simply that they made a mistake," he added.

Mr Shatter has described Mr Adams's remarks on the Smithwick Tribunal as "nauseating".

He said there was no doubt where responsibility lay, it was with those who carried guns and shot the two men.

Speaking in the Dáil, Fianna Fáil leader Micheál Martin criticised the comments made by Mr Adams.

In response Mr Adams said he did not need reminding from the Fianna Fáil leader that there were two bereaved families at the heart of the report.

He said his comments on Newstalk were a reflection of what was said in the report.

"The war is over," Mr Adams said in the Dáil. "We now have to build the peace."

"This was a case of brutal pre-meditated murder by the Provisional IRA and nothing Mr Adams says will ever change that fact.

"At a time when Dr Haass is looking at ways of dealing with legacy issues it is difficult to see how Mr Adams's comments square with his oft-repeated calls for reconciliation and truth.

Earlier today, former minister for justice Gerry Collins, who served when Supt Bob Buchanan and Chief Supt Harry Breen were murdered, has said he is very sad for the force in the wake of the report.

Speaking on RTÉ's Today With Sean O'Rourke, he said a garda investigation was carried out at the time of the murders by one of the most able people in the force.

Mr Collins said he and others accepted that report at the time, which has since "regrettably" been found short and inadequate by Judge Smithwick.

He said the Government and garda authorities must face up to Judge Smithwick's comment that both the RUC and gardaí acted swiftly to dismiss speculation of the possibility of collusion rather than deal with it in a thorough and credible investigation.

He said the question has arisen as to whether An Garda Síochána is suitable to investigate itself, and added that he does not believe it is any more.

Reputation of RUC, PSNI, or gardaí not above the law

DUP MP Jeffrey Donaldson has said now is a time for reflection and time for gardaí to fully engage with the issues raised in the Smithwick report.

Speaking on same programme, he welcomed the apology by the Government.

He said gardaí need to set aside whatever corporate issues they had before and get to the heart of this issue.

Mr Donaldson said the reputation of the RUC, PSNI, or gardaí is not above the law.

He said if there are members of any organisation who have stepped outside the law, they need to be made amenable to the law.

Mr Donaldson said members of the gardaí will be feeling hurt today that the reputation of their force has been damaged. 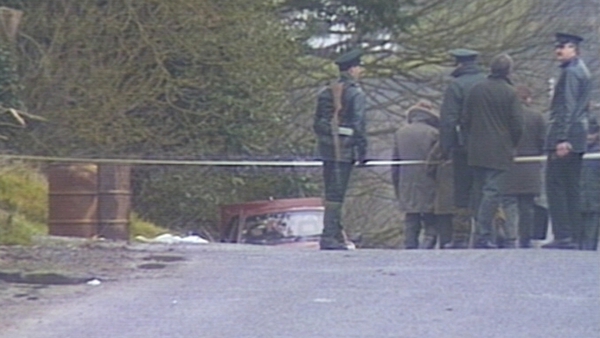