Former residents of Priory Hall have accepted a new mortgage deal that will see former apartment owners have their debt written off.

He personally pledged that their difficulties would be resolved.

Following the meeting, the committee said that after a two-year battle, homeowners are looking forward to moving on with their lives.

The committee paid tribute to the work of local councillors and those who have helped the residents since the situation began, and to Stephanie Meehan, who wrote to the Taoiseach after her partner Fiachra Daly took his own life.

In a statement the committee said: "The price she has paid is more than anyone should have to bear and every resident owes her a debt of gratitude we can never repay.

"We have no doubt that Fiachra is proud of her."

Following the meeting with Mr Kenny, Ms Meehan said the deal meant it now would be possible to try to get on with their lives.

Former senator Dr Martin McAleese has agreed to oversee the implementation of the Resolution Framework.

Dr McAleese will chair an oversight board, including representatives of the Priory Hall residents, the Irish Banking Federation, Dublin City Council and relevant government departments and agencies.

The Taoiseach said: "I believe that the agreed Framework is a fair solution to this unique and exceptional situation which will give the residents a chance to get on with their lives.

"The residents of Priory Hall are victims of one of the worst excesses of the Celtic Tiger era, and this solution recognises the exceptional circumstances they find themselves in."

Under the plan, announced by Minister for the Environment Phil Hogan, around 90 former owner-occupiers will have their old mortgage debts written off and be given a fresh start with new 100% mortgages to buy homes.

The new mortgages are expected to be equivalent to the existing ones, which were for properties costing an average of €260,000.

Loans will be worked out depending on current individual circumstances and there will be a deal for two cash buyers.

The former residents will not get back their original deposits or four years of mortgage repayments made before the complex was evacuated because of fire safety defects.

There are 27 buy-to-let investors who will be treated separately and they have "tentatively" agreed to accept a two-year moratorium on their mortgages, rather than the fresh start offered to home owners, according to spokesman Ritchie Flood.

The investors have been promised a complete refurbishment of the 187-unit complex.

Costing €10 million, the work will be paid from Government funds and be carried out by Dublin City Council.

"They have told us that the units will be completely gutted and refurbished with new facades and new internals. We have tentatively agreed to move on these assurances and that we will be given a say in the design" said Mr Flood.

The Department of the Environment has introduced new building regulations designed to ensure that the problems experienced at Priory Hall will not happen again.

A department spokesperson said that Priory Hall was a unique case because the residents were forced out of their homes during a court action and this came on top of litany of other defects identified at the buildings.

Residents had to leave their homes after legal action two years ago by Dublin City Council when its fire officers said the complex was dangerous and a fire-trap. 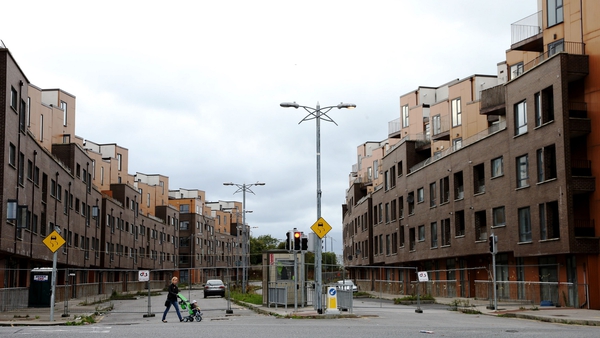