Britain's Peter Higgs and Belgium's Francois Englert have been awarded the 2013 Nobel Prize for physics for their work in developing a theory of the standard model of particle physics.

The Higgs boson is the particle key to explaining why elementary matter has mass.

The two scientists had been favourites to share the €920,000 prize after their theoretical work was finally vindicated by experiments at the CERN research centre's Large Hadron Collider.

"The awarded theory is a central part of the Standard Model of particle physics that describes how the world is constructed," the Royal Swedish Academy of Sciences said in a statement.

"According to the Standard Model, everything, from flowers and people to stars and planets, consists of just a few building blocks: matter particles."

Professor Higgs said he was "overwhelmed" to receive the prize.

He said: "I would also like to congratulate all those who have contributed to the discovery of this new particle and to thank my family, friends and colleagues for their support.

"I hope this recognition of fundamental science will help raise awareness of the value of blue-sky research."

Prof Englert told the Nobel Prize press conference via telephone that he feels very well and is now very happy.

Physics was the second of this year's crop of Nobel Prizes.

The prizes were first awarded in 1901 to honour achievements in science, literature and peace in accordance with the will of dynamite inventor and business tycoon Alfred Nobel.

The Higgs boson particle is named after 84-year-old Prof Higgs, who devised the theory in 1964.

Separately and independently in the same year, Prof Englert and Robert Brout of the Free University Brussels came up with a related theory. Prof Brout died two years ago.

Last year, scientists at CERN in Switzerland announced that they had almost definitively proven the theory, with further confirmation coming earlier this year.

It was widely expected that Prof Higgs, who lives in Scotland, would be awarded the prize by the Nobel Foundation.

However, there had been some debate about whether he would receive it alone, or whether he would share it with a number of other physicists who were involved in coming up the standard model.

Three papers were published in 1964 about the standard model.

The first came from Prof Englert and Prof Brout and was published two weeks before Prof Higgs's paper, but it failed to mention the critical particle now known as the Higgs boson.

A month after Prof Higgs's paper was published, three other physicists, Gerry Guralnik, Dick Hagen and Tom Kibble, published their theory of the standard model.

Prof Higgs's original paper theorising the existence of the boson was rejected by the editor of the journal he submitted it to at CERN in 1964.

He subsequently added two paragraphs to it, resubmitted it to a rival journal, and it was published. For some time, the physics world failed to take his theory seriously.

However, the concept gradually gained intellectual traction, helped by Higgs's own efforts, and eventually CERN decided to build an experiment to put the theory to the test.

The Large Hadron Collider, a 27km tube running in a circular tunnel under the Swiss-French border began operating in 2008, smashing particles together at almost the speed of light.

In July last year, in the presence of Prof Higgs, CERN announced that it had found substantial evidence proving the existence of the boson.

In March, it said that having analysed the data further, it was almost certain it had found the particle.

European Commissioner for Research, Innovation and Science Máire Geoghegan-Quinn congratulated both men on winning the award.

She said: "This is recognition of the contribution made to modern physics by Francois Englert and Peter Higgs.

"I would also like to pay tribute to the thousands of scientists who have worked tirelessly at CERN over many years to detect this elusive particle.

"EU-funded research has contributed to the research at CERN, including enabling the processing of the huge amounts of data from the LHC experiments that confirmed the predictions." 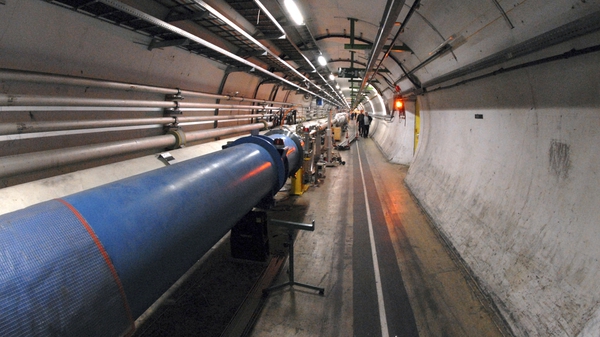