The leader of the Somali Islamist militant group al-Shabaab has confirmed claims by members of his group that it was behind the attack on a Nairobi shopping centre.

At least 72 people were killed after al-Shabaab militants attacked the Westgate Shopping Mall on Saturday.

Ahmed Godane, also known as Mukhtar Abu al-Zubayr, said the attack on the centre was in retaliation for Kenya's incursion in October 2011 into southern Somalia to crush the insurgents.

"Take your troops out or prepare for a long-lasting war, blood, destruction and evacuation," Mr Godane said.

US, British and Israeli agencies are helping Kenya investigate the attack on the centre, which was badly damaged during the four-day siege that followed the initial attack.

"We have moved to the next phase," Interior Minister Josephole Lenku told a news conference.

He said that alongside US, British and Israeli agencies, Kenya was also receiving help from Germany, Canada and the police agency Interpol in the investigation.

Mr Lenku said he did not expect the death toll of 61 civilians, six members of the security forces and five attackers to rise significantly.

He said the only bodies still likely to be found were those of dead militants.

Meanwhile, the Niall Mellon Township Trust has postponed a volunteer trip to build schools in Nairobi following the attack.

The charity said 350 volunteers were to travel out for the week-long trip on 12 October. 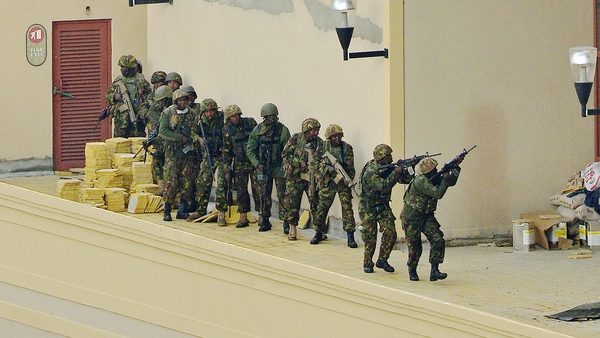