Kenyan President Uhuru Kenyatta has said that armed forces have "ashamed and defeated" the al-Shabaab militants that attacked the Westgate Shopping Mall in Nairobi.

Mr Kenyatta said 61 civilians and six security officers were killed in the attack on the shopping centre.

He said five al-Shabaab militants have been killed and another 11 have been taken into custody.

"As a nation our head is bloodied but unbowed," he said in a televised address. "We have ashamed and defeated our attackers."

Kenyan security forces have been battling the militants since they attacked the shopping centre on Saturday.

Around 200 people have been wounded in the attack.

Police had earlier said the shopping centre was under the control of government forces after a series of loud explosions and bursts of gunfire this morning.

Mr Kenyatta, who announced three days of national mourning, said several floors of the complex had collapsed during the battle.

He said he could not confirm reports of foreign militants and said forensic experts are trying to identify the nationality of the attackers.

Al-Shabaab has denied that there were foreigners among the Islamist fighters.

Military chief Julius Karangi said earlier they were "fighting global terrorism here", but he did not give any information on nationalities.

However, Kenyan Foreign Minister Amina Mohamed said in a US television interview that "two or three Americans" and a British woman were among the attackers.

Ms Mohamed told PBS's Newshour that the Americans were "young men, about between maybe 18 and 19".

She said they were of "Somali origin or Arab origin, but lived in the US, in Minnesota and one other place".

US authorities said they are looking into information given by the Kenyan government that residents of Western countries, including the US, may have been among the attackers.

White House deputy national security adviser Ben Rhodes said he had no direct information that Americans had participated in the attack.

Other known foreign victims are from China, Ghana, France, the Netherlands and Canada.

Speculation grows over identity of attackers

Kenya's Interior Minister Joseph Ole Lenku said this morning that all the attackers were men, but that some had dressed as women.

However, despite his comments, one intelligence officer and two soldiers told Reuters that one of the dead militants was a white woman.

This has fuelled speculation that she is the wanted widow of one of the suicide bombers involved in the attacks on London's transport system in 2005.

Called the "white widow" by the British media, Samantha Lewthwaite, who is originally from Northern Ireland, is wanted in connection with an alleged plot to attack hotels and restaurants in Kenya.

Asked if the dead woman was Ms Lewthwaite, the intelligence officer said: "We don't know."

British security sources have said it is "a possibility" that Ms Lewthwaite was involved in the Nairobi attack, but as yet there is no conclusive evidence.

Security remains the number one challenge

Meanwhile, the United Nations envoy for Somalia has called for additional African troops to counter al-Shabaab, which he said numbered around 5,000 people and posed an international threat.

Nicholas Kay, UN special representative for Somalia, said there was a "once-in-a-generation" opportunity to help bring peace to Somalia.

"Security remains the number one challenge, the control and defeating of al-Shabaab is key to this," Mr Kay said.

"The amount of money that we're talking about that's required for the extra effort in Somalia would be very small. But the cost of walking away would be very expensive."

President Michael D Higgins and his wife Sabina have signed a book of condolence at the Kenyan Embassy in Dublin this evening in memory of those killed.

The son of the former Ambassador to Ireland and his fiancée were killed during the attack.

Ambassador Catherine Muigai Mwangi, a cousin of the current Kenyan President, had only left Ireland in August after six years in office.

The books of condolence are open during office hours until Friday. 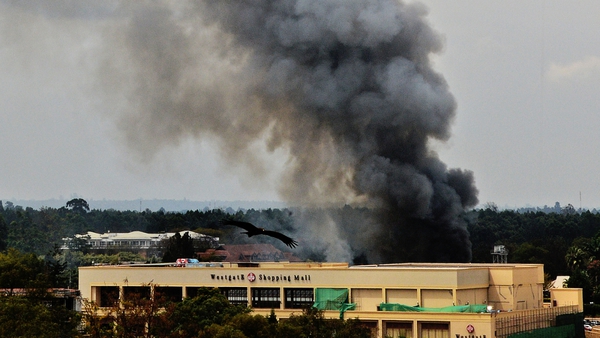